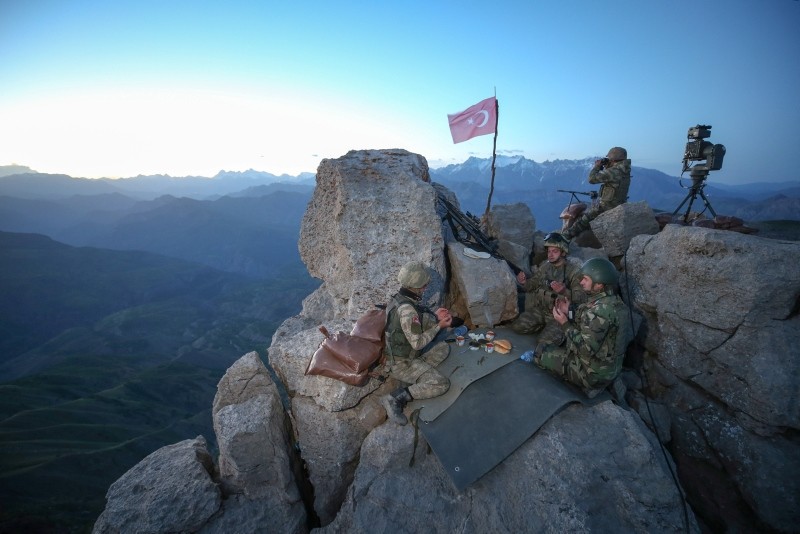 Turkish soldiers pray before breaking their fast on the first day of Holy month of Ramadan in the southeastern province of Hakkari. (AA Photo)
by Daily Sabah Jun 06, 2018 12:00 am

Turkey's military operation against the PKK terrorist organization and its elements in northern Iraq do not interfere with those conducted by the U.S.-led international coalition against Daesh terrorists, a spokesperson for the coalition said Tuesday.

"Operations by Turkey in Iraq are done through close cooperation with the government of Iraq," Colonel Sean Ryan, spokesman for Operation Inherent Resolve (OIR) wrote on Twitter amid intensified Turkish efforts for a possible military offensive on the PKK's headquarters, the Qandil Mountains.

"Turkey is a close ally & member of CJTFOIR, and the Coalition does not foresee conflict with our mission to defeat Daesh," Ryan tweeted.

Iraqi Prime Minister Haider al-Abadi said Tuesday in Baghdad that Turkey should respect Iraq's territorial integrity when conducting operations against the PKK. Abadi was quoted by Reuters as saying that Baghdad will not allow any breach of Iraq's territorial integrity and that there was no coordination between Ankara and Baghdad on the operation.

Turkish security sources, however, had previously said that the Turkish authorities have discussed the operation with their Iraqi counterparts.

Supporters of the populist Shiite cleric Muqtada al-Sadr, whose forces once battled U.S. troops, emerged with the most seats but would have to form a coalition government with other blocs in a process that could drag on for months.

Al-Abadi's bloc came in third, after a coalition of mostly Shiite paramilitary forces. He called for criminal investigations and banned election officials from traveling abroad without his approval.

Mount Qandil became the main headquarters of the PKK in the '90s after the terrorist organization used the Bekaa Valley of Lebanon as training grounds for many years.

After Daesh's expulsion from northern Syria, the PKK's Syrian affiliate People's Protection Units (YPG) settled in the area, and also took control of the Sinjar Mountains. It connected PKK elements in Syria and Iraq. The Turkish army carried out airstrikes in late April on PKK targets located on Mount Sinjar in northern Iraq and Mount Karachok in northeastern Syria to cut the corridor.

Formed in 1978, the PKK terrorist group has been fighting the Turkish government for an independent state. This terror campaign has caused the deaths of more than 40,000 people. The PKK is listed as a terrorist organization by Turkey, the U.S. and EU. The PKK resumed its decades-old campaign in July 2015 after a three-year cease-fire period and since then more than 1,200 people, including security force personnel and civilians, have lost their lives.