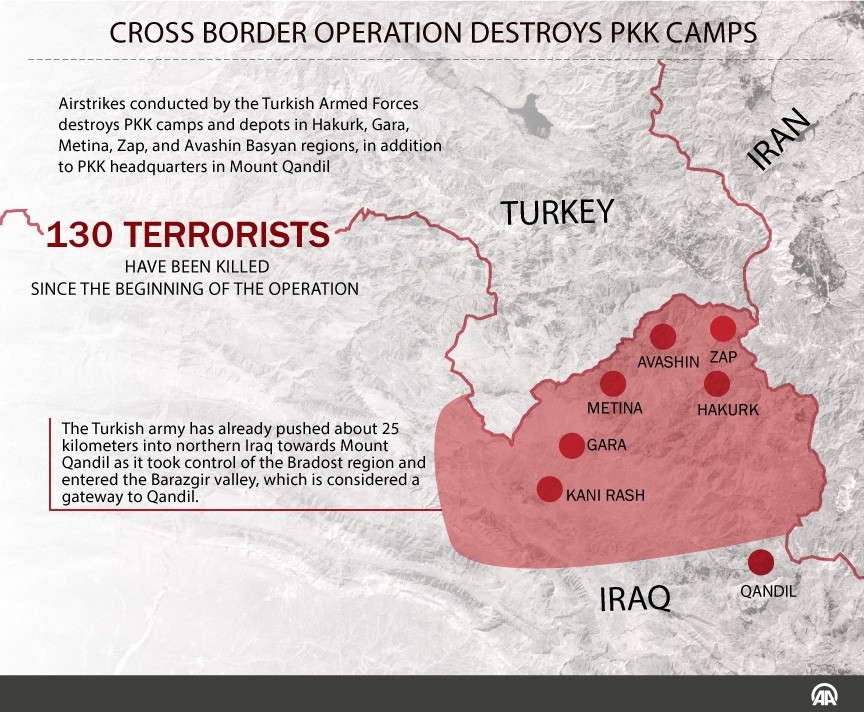 The operation to eradicate PKK leadership in Qandil is only a matter of time as the Turkish military, which already settled in northern Iraq, is ready to launch an extensive offensive

After months-long preparations and advances in northern Iraq, the Turkish army is ready to launch an extensive operation at the PKK headquarters on Mount Qandil, and deal a final blow to the leadership of the terrorist organization. President Recep Tayyip Erdoğan said on Tuesday that Turkey is determined to completely eradicate terrorism from the country. "We are going to reach the source of terrorism before it comes to us," Erdoğan said in northern Zonguldak province, where he addressed electorates at a Justice and Development Party (AK Party) election rally. Erdoğan said the army will go to Qandil and to Sinjar, a northwestern region in Iraq's Nineveh province, which has also been an area of PKK activity since 2016.

The army has already pushed about 25 kilometers into northern Iraq towards Mount Qandil as it took control of the Bradost region and entered the Barazgir valley, which is considered a gateway to Qandil. Also, on Tuesday, the Turkish military's Special Forces, who participated in Operation Olive Branch against PKK-affiliated groups in Afrin, reportedly relocated to Qandil to join the possible offensive. In addition to this, the military recently set up bases for tanks and helicopters in the region. It is also establishing another base for unmanned aerial vehicles (UAVs) and armed drones. The domestically-produced UAVs have been effectively used against the terrorist group since 2015 in Turkey and in cross-border operations.

Deputy Prime Minister and government spokesperson Bekir Bozdağ stressed yesterday in a televised interview that the PKK has substantially lost its capacity to conduct actions, adding that a ground offensive would be launched on Qandil when necessary. He also stressed that the fight against terrorism could not be halted because of the upcoming elections on June 24.

PKK headquarters since the '90s

Mount Qandil became the PKK's main headquarters in the '90s after it used the Bekaa Valley of Lebanon as training grounds for many years. The area is under de jure control of the Kurdistan Regional Government (KRG) and has been used to infiltrate Turkish soil and carry out attacks on soldiers in military outposts and during their patrol near rural areas.

Foreign Minister Mevlüt Çavuşoğlu told journalists on Monday that Turkey, the U.S., Baghdad, and KRG's capital Irbil will cooperate when an operation is launched in Qandil. "The PKK is an enemy of Erbil as well," he said. He pointed out the significance of Iraq's support regarding the issue. The PKK targets northern Iraq and has frequently been hit by the Turkish army in the last decades, which occasionally causes tension between the Turkish and Iraqi government due to the latter's objection on violating its independence. The extension of the operations vary from ephemeral air campaigns such as hitting PKK hideouts with airstrikes, to carrying out extensive land operations.

The first extensive operation was carried out in May 1983, when 5,000 Turkish soldiers crossed the Iraq border and advanced five kilometers. After a land operation on the Qandil mountains and destroying PKK hideouts, they retreated. In the mid-90s, the operations intensified due to increased PKK attacks and infiltration attempts near border towns that cost hundreds of Turkish soldiers' lives. In May 1995, the Turkish army launched "Steel Operation," which the participation of 35,000 personnel. More than 500 PKK terrorists were killed and hideouts and logistics destroyed. The Turkish army also seized 4.5 tons of narcotics during the operations.

Hürriyet columnist Abdülkadir Selvi wrote yesterday, in his column, that the decision to carry out a military operation in Qandil was decided on in a cabinet meeting on Nov. 27, 2017. Later on, he claimed, Prime Minister Binali Yıldırım discussed the operation with his Iraqi counterpart Haidar al-Abadi, and receive a green light. Yıldırım's talks were followed by visits to Baghdad by Hulusi Akar, Chief of the Turkish General Staff, and Hakan Fidan, head of Turkey's National Intelligence Agency (MIT).

After intense diplomatic efforts, the Turkish army started preparations in March by beginning to cross the Iraqi border to deal a final blow to the PKK leadership. Military units have often confronted terrorists during their march in northern Iraq. A military statement released yesterday said that 130 terrorists were killed since the start of the operation. The PKK also intensified its attacks to curb the Turkish Armed Forces advance and activities in northern Iraq. Six soldiers were killed in three separate attacks last week. Several reports have suggested that the possible operation will be commanded by İsmail Metin Temel, who also commanded Operation Olive Branch, that was carried out against the PKK-affiliated People Protection Units (YPG) in Afrin. The possible operation stirred controversy among politicians from the ruling AK Party and the main opposition Republican People's Party (CHP).

CHP group Vice Chairman, Özgür Özel said on Tuesday that the government (wants to) exploit a possible Qandil operation to boost votes in the upcoming elections, asserting that there is no terrorist presence in Qandil. Bozdağ rejected Özel's claims by saying that Qandil is still being used as headquarters by the PKK. He added that the government can't take action "accordingly to CHP's understanding." Formed in 1978, the PKK terrorist group has been fighting the Turkish government for an independent state. Its terror campaign has caused the deaths of more than 40,000 people. The PKK is listed as a terrorist organization by Turkey, the U.S. and the European Union.

* Contributed by Özgenur Sevinç from Ankara