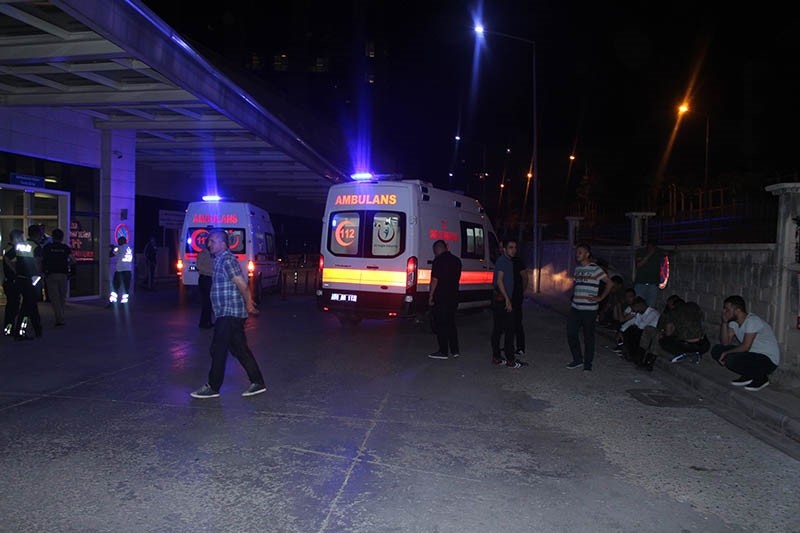 Wounded soldiers were brought to the Siirt Public Hospital after a PKK attack in Eruh district. (AA Photo)
by Daily Sabah with AA Jun 19, 2018 12:00 am

Two Turkish soldiers were killed and four others injured by PKK terror attacks in southeast Turkey, the military said Tuesday.

In Siirt province, one soldier was killed and two others injured early Tuesday in a bomb attack by the PKK.

The sources, who asked not to be named for security reasons, told Anadolu Agency that the PKK terrorists previously planted the bomb on a road and detonated it by remote control while the soldiers were passing.

The attack took place in a rural area in Eruh district.

Three soldiers were taken to Siirt Public Hospital, where one of them succumbed to his injuries. The other two are being treated.

In Şırnak province, one Turkish soldier was killed in action and two others were injured by a PKK handmade explosive.

The soldiers of the 6th Motor Infantry Brigade Command were conducting a roadside search operation at Mount Gabar when the handmade explosives planted in advance by the terrorists detonated.

The wounded soldiers were taken by helicopter to Şırnak State Hospital.

Security forces have launched an operation to capture terrorists in the areas in both Siirt and Şırnak.

Meanwhile, the Turkish military said early Tuesday it has "neutralized" 36 terrorists in anti-terror operations in both Turkey and northern Iraq.

In a statement, the Turkish General Staff said airstrikes on Sunday and Monday neutralized 26 terrorists.

The airstrikes neutralized terrorists in northern Iraq's Avasin-Basyan region, the Silopi area in eastern Turkey's Şırnak province, and the Hani area in the southeastern Diyarbakır province, the statement added.

Shelters and weapon emplacements used by terrorists were also destroyed during the operation, the statement said.

In another statement, the Turkish General Staff said that another 10 PKK terrorists were neutralized in Qandil, northern Iraq -- the headquarters of the terrorist PKK -- on June 10.