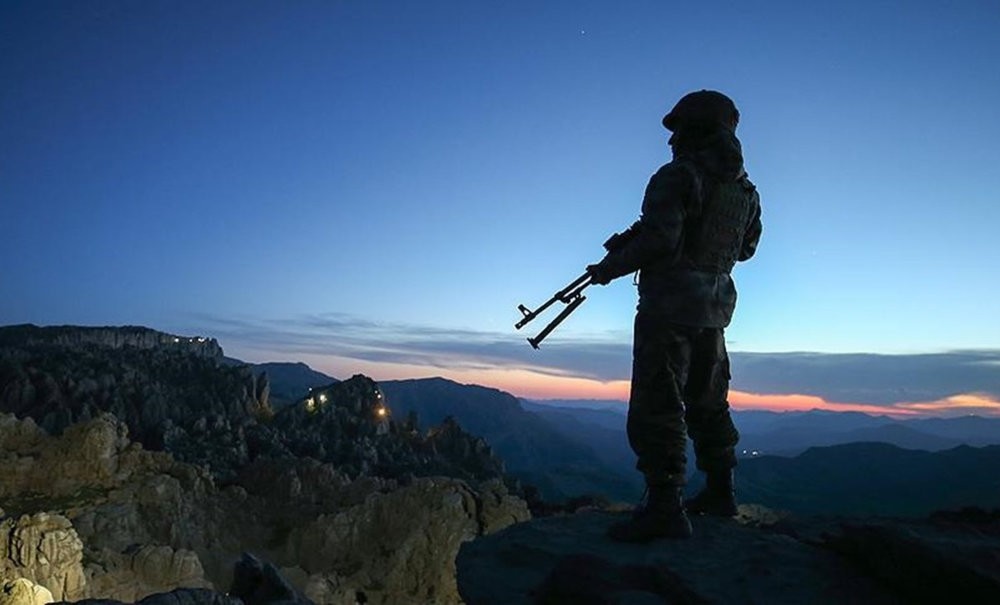 Turkey's intensified counterterrorism operations against the PKK headquarters in the Qandil mountains, northern Iraq, continue at full-speed, with 35 key figures killed in the latest airstrikes.
by Daily Sabah Jun 23, 2018 12:00 am

Turkey's objective to drain the PKK terror swamp in Qandil mountains in northern Iraq is being fulfilled Ankara says, despite the dazzling election agenda, indicating no steps will be taken from commitments in the fight against terrorism.

He added that the Turkish military killed 35 key members of the PKK terror group in an air operation on Qandil mountain.

Terror threats directed by PKK terrorists from the Qandil mountains, located roughly 40 kilometers southeast of the Turkish border in Iraq's Irbil province, prompted the operation of the Turkish Armed Forces (TSK) on March 10. The Qandil mountains are used as headquarters by the PKK and its Iranian affiliate, the Kurdistan Free Life Party (PJAK). The PKK is an internationally recognized terrorist organization, which is listed as a terrorist group by the U.S., Turkey and the European Union.

The government officials have underlined that Ankara will not step back until all the terrorists are eradicated and ensure that terrorists will not be able to use the region as a headquarters again.

Speaking in a televised interview on Friday, Foreign Minister Mevlüt Çavuşoğlu said: "We need to drain this swamp. If we want to live in peace in Turkey, we must achieve this."

The minister said that the Qandil operation has been successfully continuing and added that all targets have been effectively eliminated. He added that significant steps are also being taken against the terror group's high-level cadres.

Çavuşoğlu said that the PKK is a threat against other neighboring countries as well, including Iran. "As they are not attacking Iran today, it does not necessarily mean that they will not attack later. No one can say that they are not aiming to divide Iranian soil," he said, referring to the terror group. He added, "Therefore, we need to constantly cooperate with Iran."

Many cross-border infiltrations by PKK terrorists through the Turkish border take place in northern Iraq, in regions close to the Qandil mountains.

Since the launch of operations on Qandil, Turkish fighter jets have also intensified airstrikes in the region.

Turkish warplanes killed nine PKK terrorists as part of a counterterrorism operation in northern Iraq Thursday, the military said Friday. In a statement, the Turkish General Staff said the warplanes targeted the terror group in the Hakurk-Kani Rash region. Shelters, hideouts and weapon depots were also destroyed, the statement added.

National Defense Minister Nurettin Canikli said earlier this month that Turkey has been using its right to self-defense in northern Iraq and the TSK is paying utmost attention to avoid harming civilians as it did in the Afrin Operation and Operation Euphrates Shield. Canikli said that terrorists would not be able to show their presence in the region again.

Turkish security forces have so far crossed almost 30 kilometers into northern Iraq. Nearly 200 terrorists have been killed in recent airstrikes on PKK targets in northern Iraq.

Trust between Turkey-U.S. can be restored if Manbij deal implemented

Çavuşoğlu also said, "If we continue to implement the Manbij deal successfully, we can restore trust between the countries," referring to the recent deal between Ankara and Washington over the withdrawal of the PKK's Syrian affiliate from Manbij in northern Syria.

He said that the main objective of the deal is to ensure the retreat of People's Protection Units (YPG) terrorists first from Manbij and other region of Syria as well.

Erdoğan also said on Friday, "Turkish armored carriers entered Manbij" and added that the people of Manbij will soon return to their homes.

The Manbij road map was announced after a meeting in Washington earlier in June between Foreign Minister Çavuşoğlu and U.S. Secretary of State Mike Pompeo.

The process will involve a 10-day preparation period that started Tuesday June 5 before YPG militants start withdrawing. The YPG will withdraw as early as July 4 Çavuşoğlu said earlier in the week, after which Turkish forces will be deployed to pacify the region and train local forces to establish security.

The foreign minister said that the road map is essential to provide stability to Syria. He noted, "Following the YPG/PKK's retreat, there will be a vacuum that will be temporarily filled by the soldiers of Turkey and the U.S." He added that security measures would be taken in the region.

Meanwhile, the TSK on Friday completed their third round of patrolling in the northern Syrian city of Manbij as part of a deal with the U.S. to rid the area of the YPG terror group.

According to an Anadolu Agency (AA) correspondent on the ground, armored vehicles belonging to the Turkish military carried out patrols in the area that separates the Jarablus region, controlled by the Ankara-backed Free Syrian Army (FSA), from Manbij.

The first patrols by both Turkish and U.S. troops in the region began on June 18 and the second patrols were on June 20.