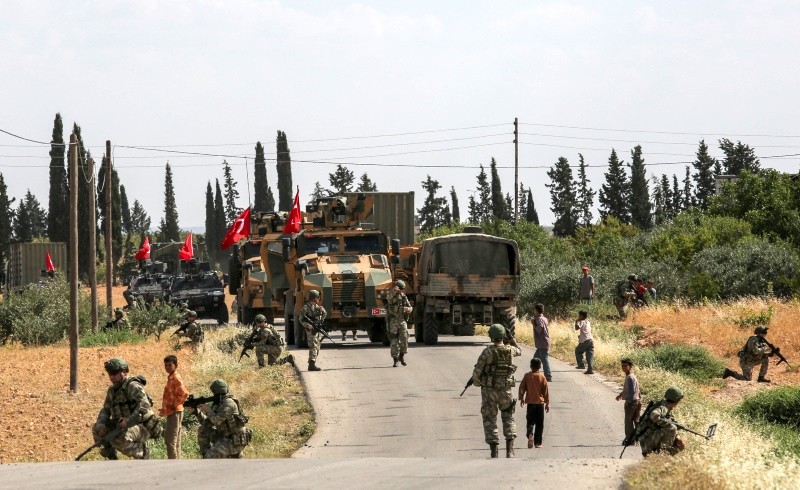 As the departure of the PKK's Syrian affiliate, the People's Protection Units (YPG) from the northern Syrian city of Manbij as part of a deal with the U.S. approaches, the Turkish military completed their seventh round of patrolling in the province Sunday.

According to the road map that was agreed between Turkey and the U.S., the YPG will begin leaving the Manbij region as of July 4.

On its Twitter account, the Turkish General Staff said that both countries' forces conducted separate coordinated patrols in the area between the Operation Euphrates Shield region and Manbij.

The first patrols by both Turkish and U.S. troops in the region began on June 18.

The Manbij deal, which was made between Turkey and the U.S., focuses on the withdrawal of the YPG terrorist organization from the northern Syrian city in order to stabilize the region.

Previously, U.S. military support for the YPG terrorist group in Manbij has strained ties between Ankara and Washington and has led to fears of military clashes between the two NATO allies since there were roughly 2,000 U.S. troops deployed in the city.

However, a Manbij road map was announced after a meeting in Washington between Foreign Minister Mevlüt Çavuşoğlu and U.S. Secretary of State Mike Pompeo in early June.

Should the Manbij model prove to be a success, Turkey will push for a similar arrangement in eastern Syria to remove terrorist elements that have major affiliations with the PKK.

The YPG's ultimate aim is to establish an autonomous region in northern Syria by connecting the northwestern Afrin canton to the Kobani and Jazeera regions in the northeast. Thus, Turkey expressed that the presence of terror forces near its border constitutes a threat and has launched military operations and other efforts to rid the region of terrorists.

Launched on Aug. 24 of last year, Operation Euphrates Shield was initially meant to clear the border of the threat of terrorism from the Daesh and the YPG. Regarding the operation, Ankara had said that it is an act of defense since its cities and towns were under constant attack from both Daesh and the YPG, and that is why they should be driven from the border.

Successfully achieving its aim, Turkey managed to force the YPG to withdraw to the east of the Euphrates River while completely cleaning northern Syria of Daesh.

On Jan. 20 Turkey launched another operation, Operation Olive Branch, to remove YPG and Daesh terrorists from northern Syrian province of Afrin. On March 18, the 58th day of the operation, Turkish troops and Free Syrian Army (FSA) members liberated the town of Afrin.