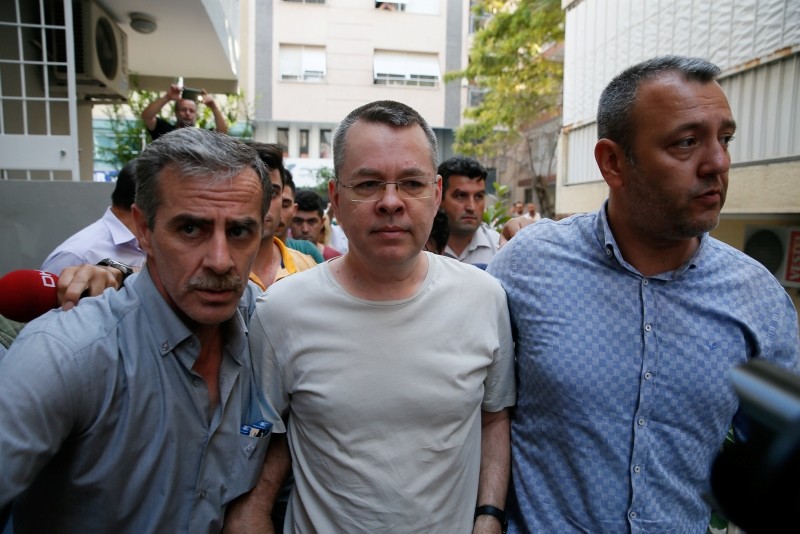 Pastor Andrew Brunson (C) is escorted by police officers while he is being transferred to his home where he will remain in house arrest, on July 25, 2018, in Izmir, western Turkey. (AA Photo)
by daily sabah Jul 25, 2018 12:00 am

A court in western Turkey yesterday ordered the release of Andrew Craig Brunson, a U.S. pastor who was jailed for his links to the Gülenist Terror Group (FETÖ) and the PKK, two terrorist groups active in Turkey.

The release followed an appeal by Brunson's Turkish lawyer who objected his extended detention in an earlier hearing, citing health problems the 50-year-old defendant suffers from.

The Second High Criminal Court in the city of Izmir where Brunson ran the Resurrection Church ordered his house arrest and a ban on travel abroad for the pastor.

Last week at his third hearing, the Izmir court ordered Brunson to remain in detention, rejecting his lawyer's plea for release.

The statement Wednesday by the court said that the jurors had reconsidered the decision based on the plea by Brunson and his lawyer over his health and had come to the conclusion that his detention could be maintained effectively through house arrest given the circumstances.

Upon the ruling, the Turkish lira strengthened to 4.8340 against the dollar from 4.8599 before the report.

Following the court's decision Brunson was seen leaving the prison at around 5:30 p.m. local time (1430 GMT).

Live television footage showed Brunson being put into a vehicle outside prison and then driven away guided by a police motorbike escort.

Brunson, a Christian pastor from North Carolina who has lived in Turkey for more than two decades, was indicted on charges of helping the Gülenist Terror Group (FETÖ), which is responsible for the failed 2016 coup, as well as supporting the PKK terrorist organization.

Witnesses in the case claimed Brunson had harbored PKK supporters in his church and coordinated U.S. arms shipments to a group affiliated with the PKK in Syria. The indictment against Brunson also says he had contact with Bekir Baz, a fugitive senior member of FETÖ who was in charge of the group's network in İzmir. Turkish prosecutors say Brunson used his guise as a pastor to commit crimes for terrorist groups and coordinated actions with them. Apart from Baz, Brunson also contacted Murat Safa, a Turk who was "an aide" of Baz within FETÖ and Taner Kılıç, another FETÖ-linked man who is being tried for membership of a terrorist group. The indictment also includes a text message by Brunson to an unidentified U.S. soldier. Brunson says in the message that they would "win in the end" while speaking about the July 15 coup attempt.

The pastor is among thousands detained following the coup attempt that killed 250. In a sweeping crackdown against FETÖ, security forces rounded up military officers, police officers, bureaucrats, judges, prosecutors and people of other professions linked to the group. FETÖ is known for its massive infiltration in the military, law enforcement and judiciary. It is accused of carrying out the 2016 coup attempt with its military infiltrators. Brunson is also among three people with intimate ties to the United States, FETÖ and PKK. Metin Topuz, a Turkish staffer of U.S. Consulate in Istanbul, was also detained following the coup attempt for his ties to FETÖ. Topuz is charged with espionage and allegedly had close contacts with several former police chiefs and prosecutors jailed for their links to the group. An employee of the U.S. Consulate in the southern Turkish city of Adana is also jailed for his links to the PKK.

The United States is criticized by Turkish leaders for tolerating FETÖ which runs a chain of charter schools across the country and dragging on an extradition process for the group's leader Fetullah Gülen. Gülen lives in a posh compound in Saylorsburg, Pennsylvania and is accompanied by a number of other FETÖ suspects wanted by Turkey. He is the prime suspect in all trials related to the 2016 coup attempt and faces multiple aggravated life imprisonment sentences.