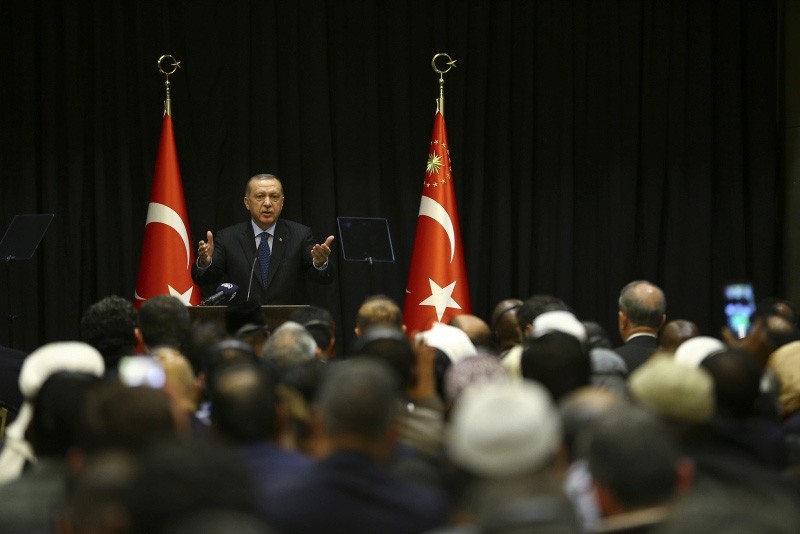 President Recep Tayyip Erdoğan denounced all terrorist groups on Thursday in a speech given during his visit to South Africa. Along with slamming the al-Qaida terrorist group, Daesh and the PKK, he also warned South Africa against the threat posed by the Gülenist Terror Group (FETÖ).

Erdoğan addressed a gathering of Muslim community leaders during a visit to Johannesburg where he is attending the BRICS Summit. Speaking about FETÖ, he warned, "We must be vigilant against this organization whose main goal is to pit a brother against brother."

​Erdoğan called terrorist organizations targeting Turkey such as Daesh, FETÖ and the PKK "nests of evil" that slaughter their brothers.

He also said that South Africa is only second to the U.S. among countries where FETÖ is most active.

"We are aware that FETÖ is trying to attract Muslims in South Africa, especially through educational institutions... The enemies of Islam controlled FETÖ, which used incentives such as education, charity and dialogue to infiltrate for 40 years," Erdogan added.

Later on, he touched upon the once-powerful al-Qaida, saying the terrorist group "has done nothing but spill Muslim blood."

FETÖ is reportedly present in more than 150 countries around the world, through schools, NGOs, lobbyists, media outlets and other companies.

The PKK, on the other hand -- listed as a terrorist organization by Turkey, the U.S. and the EU -- has been responsible for the deaths of nearly 40,000 people, including women and children in its more than 30-year terror campaign against Turkey.