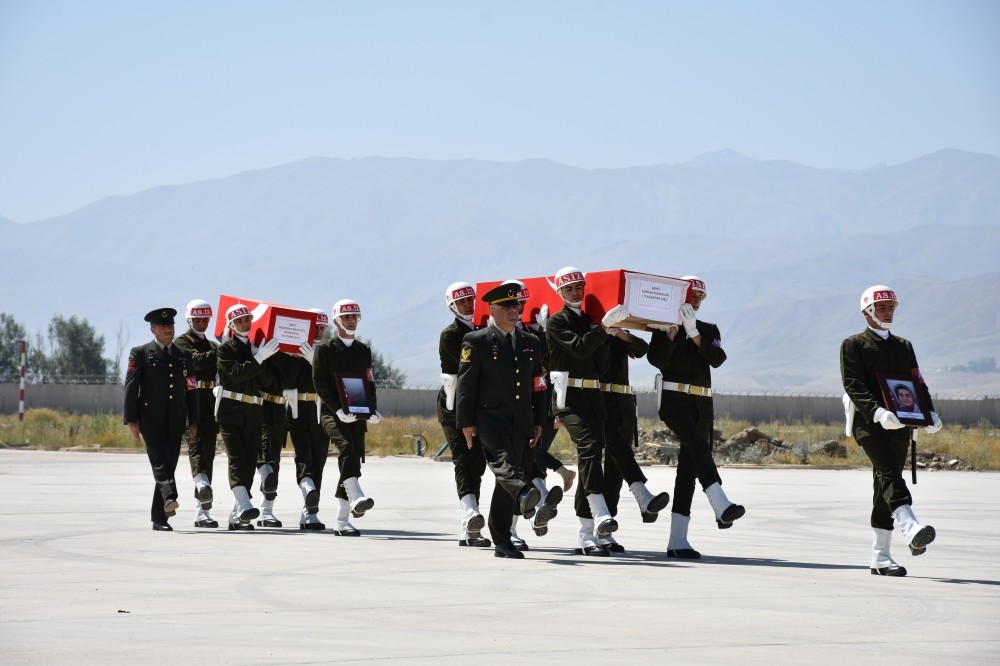 Soldiers carry the coffins of the mother and the baby killed by the PKK in a ceremony before they are sent to their hometown, northern Sivas province, for funeral service, yesterday.
by Daily Sabah Aug 01, 2018 12:00 am

In its heinous attacks carried out in the southeast, PKK terrorists have once again targeted civilians, this time killing a 25-year-old mother and her 11-month old baby

Turkey was shaken Tuesday with the news of a mother and her 11-month-old baby who were killed in the southeast by a roadside explosive device planted by the PKK, a terrorist group which is frequently whitewashed by Ankara's Western allies.

A remote-controlled roadside improvised explosive device (IED) was detonated when the victim, the wife of noncommissioned officer Serkan Karakaya, was returning from visiting her husband with her 11-month-old baby in the Yüksekova district of southeastern Hakkari province. The 25-year-old mother, Nurcan Karakaya, died on the spot, while the baby, Mustafa Bedirhan, succumbed to his wounds at Yüksekova Public Hospital, where he was rushed to for treatment after the explosion.

Speaking to reporters yesterday, Serkan Karakaya said his wife had planned the visit as a surprise. "I did not know she was coming to the base. We met for about two hours," he said in tears, and added that he had just come from an operation before the surprise visit of his wife. "When they left, Bedirhan [the baby] hugged me and cried. This had made me really sad," father Karakaya said.

He added that he had followed their vehicle when they were leaving the base. "I ran to them when the explosion happened, but I couldn't save them. They took my life away from me. I lost my two reasons for living, but I promise as a soldier that I will not stop until I root out the murderers." The mourning soldier husband said Aug. 11 was his wife's birthday. "I have been preparing for her birthday for days in between operations. I had made a poster and I was going to make a video for her at the base and publish it on her birthday, expressing my feelings for her. I had planned to knock on her door with flowers and a cake and then go out to celebrate her birthday," he said. 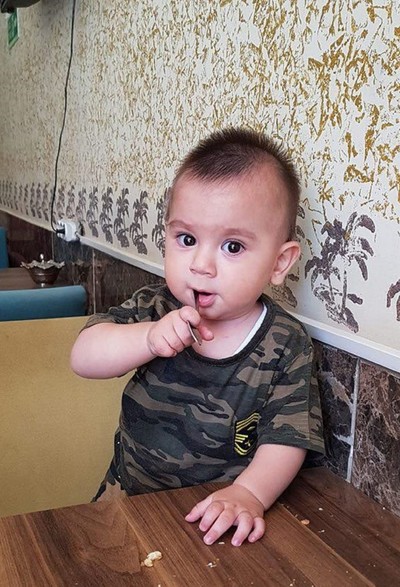 The bodies were sent to the Şarkışla district of Sivas province, where funeral services were held. President Recep Tayyip Erdoğan also attended the funeral service. "We have witnessed once again how vile, how discredited, this separatist terrorist group is, once again as the killers of our sisters and children," Erdoğan said, speaking during the funeral ceremony.

The president added that Turkey's fight against terrorism will continue until all terror threats are eliminated.

The attack has received harsh criticism from government officials and opposition party leaders.

Parliamentary speaker Binali Yıldırım released a statement condemning the attack. "I strongly condemn the attack carried out by the murderer partners of the imperialists," Yıldırım said in the statement, and offered condolences to the Karakaya family.

"The PKK was a baby-killer 40 years ago. From its leader, the founder, from top to the bottom, all of the PKK was a baby-killer yesterday, exactly like it is today," Interior Minister Süleyman Soylu said yesterday during the graduation ceremony of special operations police in northern Karabük province. Soylu accused "those who supported PKK terrorists in Europe" of the attack in Hakkari. "Everybody, each country and institution linking arms with the PKK, was a partner to this massacre yesterday, and so are they today," Soylu added. "We will hold the baby killers to account. We will make life unbearable for them. We will bring down their caves on their own heads," Foreign Minister Mevlüt Çavuşoğlu wrote yesterday on his official Twitter account. 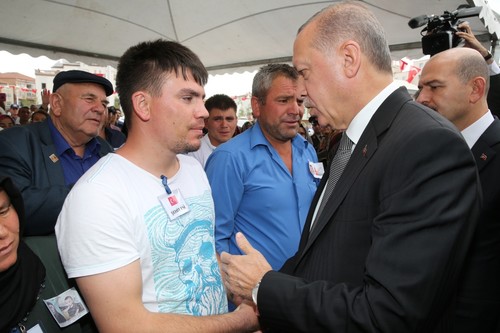 "I curse the bloody-minded PKK terrorist organization that murders innocents and kills a mother and her baby via a sneaky trap," main opposition Republican People's Party Chairman Kemal Kılıçdaroğlu wrote on his official Twitter account. Nationalist Movement Party (MHP) Chairman Devlet Bahçeli also condemned the attack. "Fed with the blood it sheds and the lives it takes, the PKK has been the perpetrator of violence and massacres," Bahçeli wrote on his official Twitter account. Great Union Party (BBP) Chairman Mustafa Destici also condemned the attack in a press conference held at his party's headquarters in Ankara. "The PKK has proven once again it is a baby killer," Destici said yesterday.

The PKK is listed as a terrorist group by the United States, European Union and Turkey. Yet, the group, which has often targeted civilians in its attacks in the past 40 years of conflict against Turkey, is frequently whitewashed by Western media and Ankara's Western allies.

Followers of the PKK have long enjoyed freedom to sustain their activities across European cities, despite the EU's ban, including fundraising and recruitment. The tacit lenience given to the sympathizers and members of the PKK by many European countries over the years has given militants the courage necessary to escalate their actions into violent attacks against Turks and the wider Turkish community. The violent attacks saw a particular rise this year, after Turkey launched a cross-border operation into Syria to eliminate the PKK's Syrian affiliate, the People's Protection Units (YPG), which is politically and militarily backed by Washington. Turkey has long warned its European allies to move from mere rhetoric against the group to taking concrete action, as the group will eventually bring its violence to European cities. However, Ankara's demand has not yet come to realization.

The U.S., on the other hand, supports the YPG, which dominates the Syrian Democratic Forces (SDF), a group Washington has partnered with in the fight against Daesh. Despite Turkey's warnings that the YPG is not any different than the PKK, as they share the same ideological leadership and organizational structure, Washington has provided truckloads of weapons to the group. Ankara argues that the arms support given to YPG is ultimately transferred to the hands of the PKK terrorists and used against Turkey and its citizens.

Western media has often portrayed PKK terrorists, including suicide bombers, as hero fighters. Many articles have hailed the YPG terrorists in Syria, despite the group's record of child soldiers, forceful displacement, arbitrary arrests and other human rights violations documented by international monitors.

PKK terrorists have long targeted civilians, state officials in the southeast as well as Kurdish citizens who are critical of the group. Since last year, several civilians have been killed in PKK attacks. After the June 24 elections in the country, the PKK had targeted Mevlüt Bengi, a poll observer in the in eastern Ağrı province. Bengi was kidnapped, threatened and tortured by PKK terrorists. Later on, he was shot in the head. Locals found him tied to an electricity tower on a mountain, far away from the town center. The terrorists reportedly targeted him for being a collaborator of the ruling Justice and Development Party (AK Party) after he served as an AK Party election observer at the ballot boxes in his district, during the elections.

A young teacher, Necmettin Yılmaz, in Turkey's southeastern Şanlıurfa province was killed by the PKK in the eastern Tunceli province in June of last year. The 23-year-old teacher's car was waylaid and set ablaze by the terrorists as he drove to his hometown of Gümüşhane, a city in northern Turkey, for the summer break.

In another incident last year, this time in the southeastern Şırnak province, Tayyip Fidan, the father of two village security guards, was kidnapped and killed by the PKK. Fidan was kidnapped by PKK members while taking his animals out to pasture, he was shot and later left in a remote part of the city.

Furthermore, Sami Çiftçi, another civilian, was kidnapped from his home in Çatalca village in southeastern Hakkari province's Şemdinli district last year. PKK terrorists then took the man far away from his home in the Güvenli area and shot him dead.

A teacher, Şenay Aybüke Yalçın, was also killed by the PKK in southeastern Batman province last year. Yalçın was traveling in a car with her colleagues when PKK terrorists launched an attack. The car she was in was hit by stray bullets as terrorists fired shots from assault rifles, targeting a nearby car belonging to a local mayor in the Kozluk district of the province. The terrorists' target was another vehicle carrying lawyer Muhammet Işık, the nephew of Mayor Veysi Işık. After Yalçın's shooting, the terrorists drove the same vehicle, filled with explosives, into a checkpoint near a police station in the district, wounding three people. The terrorist driving the car was killed in the blast, while the other fled the scene before the blast.

On July 1, 2017, Aydın Ahi, the AK Party's deputy chairman of the Özalp district in Van, was kidnapped and shot dead. Hours earlier on the same day, the party's Diyarbakır deputy chairman, Orhan Mercan, was shot in front of his house.

Formed in 1978, the group has been waging violent attacks against the state and citizens since 1984, during which nearly 40,000 people have been killed.