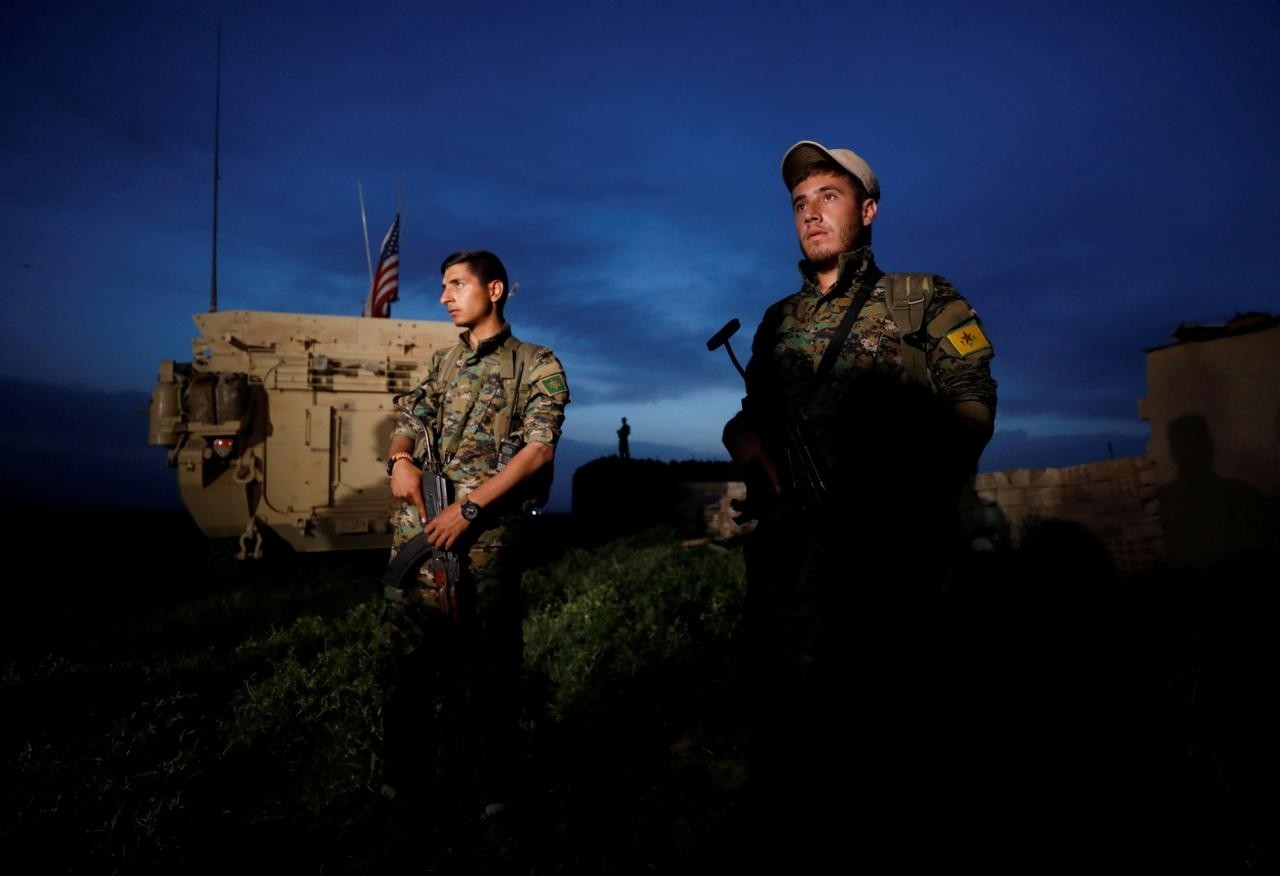 Fighters from the People's Protection Units (YPG) terrorist group stand near a U.S military vehicle in the town of Darbasiya near the Turkish border, Syria April 28, 2017. (Reuters Photo)
by Daily Sabah Aug 08, 2018 12:00 am

The PKK and its Syrian wing the PYD/YPG/SDF's racism knows no boundaries, going as far as shooting a soldier of the country that helps them in Syria for trying to give medical assistance to wounded non-Kurdish people

A terrorist from the Syrian Democratic Forces (SDF), which is overwhelmingly comprised of People's Protection Units (YPG) militants, shot one of his American patrons for trying to help a wounded non-Kurdish man, journalist Paul Szoldra revealed on Wednesday in an exclusive to military news website Task and Purpose.

The incident has been well kept as a secret since the beginning of Operation Inherent Resolve (OIR), Szoldra said.

According to the piece, a vehicle containing around eight dead or wounded civilians came close to a gate manned by SDF militants, and the terrorists told American soldiers that it was just a car having trouble running outside, which quickly turned out to be a lie.

U.S. Marines, after seeing a child "soaked in blood" and a truck bed filled with wounded or dead civilians, decided to provide medical assistance. The SDF terrorists said that the wounded should not be aided because they were not Kurdish, in a clear violation of the Geneva Convention.

Marines Sgt. Cameron Halkovich and Cpl. Kane Downey later pushed the SDF soldiers out of the way and opened the gate, with the army surgical team arriving at the scene and starting immediate treatment.

"It was purely racial. They refused to give them an ambulance," one source was quoted as saying in the piece.

"Army medics managed to save four of the victims, according to the first source. But the SDF 'was not happy,' the other source said," Szoldra added.

"The Kurds even threatened to kick the Marines out of the compound for their humanitarian act."

Later on, Downey heard two gunshots and saw his comrade Halkovich lying on the ground, with an armed terrorist standing beside him. Dropping the attacker dead with two shots to the chest, "Halko was shot," the journalist said.

Even though the OIR denies the incident and tries to keep it under covers, the shooting did happen, Szoldra says. "According to the award citation for the Joint Service Commendation Medal that Downey would receive in March for what was called a 'shooting incident,' the Marine 'acted decisively to eliminate the threat to his comrade' before applying a tourniquet to Halkovich's leg and fireman-carrying him to the surgical facility."

The U.S. government has long supported the YPG terrorist group and its umbrella organization the SDF with a vast amount of military equipment and heavy armament to fight Daesh.

In October 2015, the Democratic Union Party (PYD), the YPG's political branch, brought in small groups of Arab fighters to form the SDF, promising to share weapons and logistics offered by the United States.

The U.S. Central Intelligence Agency (CIA) has also officially confirmed that its sees the PYD, which is headed by chairman Salih Muslum, as the Syrian wing of the internationally-recognized terror group PKK.

Nevertheless, the U.S. still continues to aid and abet PKK terror in Syria.