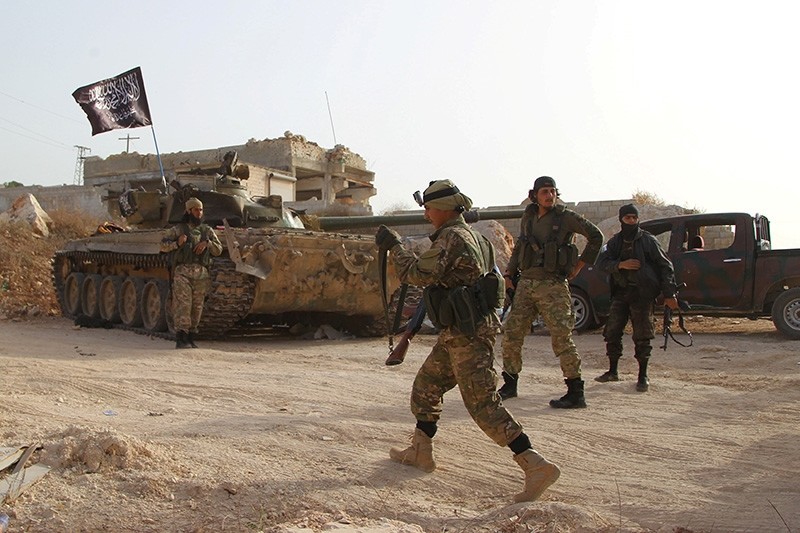 Members of Nusra Front carry their weapons as they move toward their positions during an offensive to take control of the northwestern city of Ariha from forces loyal to Syria's Bashar Assad, in Idlib province May 28, 2015. (Reuters Photo)
by Daily Sabah with Reuters
Aug 31, 2018 12:00 am

Turkey has legally listed the Syrian group Tahrir al-Sham as an alternate name for the Nusra terrorist group, according to a presidential decision published Friday, as Damascus prepares for a military assault in northwest Syria where the group holds sway.

The notice in the Official Gazette matches a decision by the United Nations in June to add Tahrir al-Sham to the list of people and organizations whose assets are to be frozen because of links to militant groups al-Qaida and Daesh.

It comes before an expected attack by the Assad regime army, backed by Russia, on the northwestern Syrian region of Idlib which is home to nearly 3 million people on the border with Turkey.

Tahrir al-Sham, another name for the al-Qaeda-linked group formerly known as Nusra Front, is the most powerful terrorist alliance in Idlib, the last major opposition-controlled enclave outside Bashar Assad's control.

After the fall of Aleppo in November 2016, dozens of opposition groups, including Ahrar al-Sham and the formerly al-Qaida-linked Hayat Tahrir al-Sham (HTS), have squeezed into Idlib.

Russia said Friday the Syrian regime had every right to chase terrorists out of Idlib, adding that talks were underway to set up humanitarian corridors there.

Turkey has repeatedly warned that an operation on Idlib, which is severely overcrowded with internally displaced people, could result in a humanitarian disaster.

"It is important for all of us to neutralize these radical groups," Foreign Minister Mevlüt Çavuşoğlu said. "But we have to distinguish the civilians from the terrorist groups."

U.N. Syria envoy Staffan de Mistura said Thursday there was a high concentration of foreign fighters in Idlib, including an estimated 10,000 who he said belonged to Nusra Front and al-Qaida.

But he said there should be no rush to military action and called for more time for Turkey, Russia and Iran to discuss the situation in Idlib.

President Recep Tayyip Erdoğan is due to meet Russian President Vladimir Putin and Iranian President Hassan Rouhani at a three-way summit in Iran on Sept. 7.