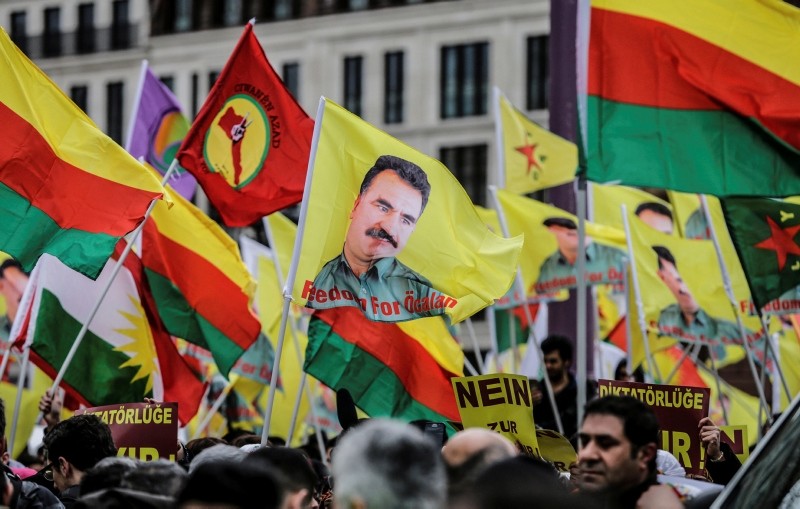 Nearly 60 supporters of the PKK terrorist group gathered Wednesday for an illegal demonstration in western Germany's Duisburg, clashing with the police and disrupting traffic.

Local media reported that the group blocked a busy street in the city's Marxloh district, waving the banned flag of the terrorist organization and holding posters of its imprisoned leader Abdullah Öcalan.

German police moved to prevent further chaos by identifying the protesters and asking them to go home. During the police intervention, some PKK sympathizers refused to disperse peacefully, leading to some scuffle. The resistance also led to heavy traffic in the city, cutting off access to some nearby stores.

The police later said that one of the PKK supporters was arrested on the grounds of having an international arrest warrant, while another was taken into custody for resisting officers.

A total of three criminal charges were filed, while 37 PKK flags and three Öcalan T-shirts were confiscated, the police added.

One of the demonstrators had reportedly a knife with him, which was also seized by the police.

The gathering was organized after a registered pro-PKK rally in Dortmund, which was previously planned to last for four days was canceled after two hours of its start on Sunday.

The protest, which was attended by around 150 people, forcefully ended after at least five police officers were injured, one of them seriously. The four-day-long rally was later banned on the grounds of violating the law which bans the use of PKK related symbols and flags in Germany.

Despite its international status as a terrorist organization, the PKK has enjoyed relative freedom in European cities and has a particularly strong presence in Germany. PKK supporters have been allowed to hold rallies, recruit militants and collect funds in Germany, which is home to some 5 million people with Turkish origin, including Kurds.