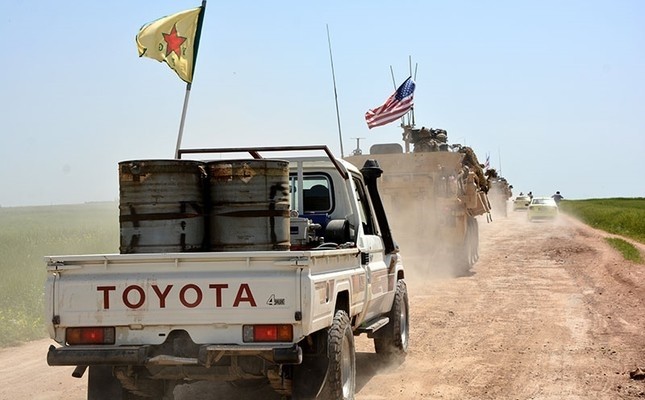 A convoy of U.S. army troops and YPG terrorists patrol close to the al-Ghanamya village, near the Syrian-Turkish border, Syria, April 29.
by Daily Sabah Sep 21, 2018 12:00 am

The PKK's Syrian affiliate the YPG continues to receive military support from Washington, despite the U.S. listing the PKK as a terrorist organization

The United States' support for PKK-affiliated terrorist groups in Syria continues with the latest delivery of 250 truckloads of weapons and military equipment on Wednesday.

Kino Gabriel, the spokesperson for the Syrian Democratic Forces (SDF), a group which is dominated by the PKK's Syrian-affiliate, the People's Protection Units (YPG), told the Sputnik news service that the U.S. supports the group under the pretext of defeating Daesh in Hajin, a Syrian town in the eastern Deir ez-Zor province, where the YPG launched its latest offensive on Sept. 11.

The YPG launches airstrikes in the region with the support of not only the U.S., but also France. The YPG occupies areas in the eastern part of the Euphrates River as well as rural eastern and western parts of Deir ez-Zor. In total, approximately 28 percent of Syrian territory is under control of the YPG. Daesh, on the other hand, is active in three areas in Syria, or about 3.3 percent of Syrian territory. Approximately 3,000 Daesh terrorists are currently hiding in Hajin.

Ankara has long told Washington that the YPG is not different from the PKK and partnering with one terrorist group against another one is not acceptable. Washington, however, has continued to support the YPG, despite the U.S. listing the PKK as a terrorist organization.

"[The] U.S. sent us Hummer vehicles and heavy weapons for the Hejin operation. There are also automatic machine guns, howitzers and other light weapons from the weapons that were sent by the U.S.," an anonymous senior SDF terrorist said to Sputnik.

"The weapons entered the country from northern Iraq's Semalka border gate," he added.

The YPG was the focus of Turkey's counterterrorist operation, Operation Olive Branch, in Afrin, Syria, near the border with Turkey.

To date the U.S. has sent a total of 4,700 heavy weapons and armored vehicles to the YPG, despite warnings by Turkey.

Meanwhile, in addition to supporting the terrorist organization with weapons, the U.S. State Department also omitted the YPG from its 2017 Country Reports on Terrorism, which was released on Wednesday. The previous edition of the report noted that Turkey views the YPG as an extension of the PKK.

The report gave credit to Turkey's continuous efforts to defeat terrorist organizations both inside and outside its borders, including the PKK and Daesh. However, in this context, despite mentioning Operation Euphrates Shield, which was launched against Daesh and the YPG in northern Syria, the report failed to not only recognize the YPG as a terrorist organization, but also failed to mention its name as a group that Turkey fights against.

Led by U.S.-based Gülen, FETÖ sought to topple the Turkish government and seize power on July 15, 2016, through a military coup to impose martial law.

The attempt was prevented by military troops loyal to the government, police units and millions of Turkish citizens in favor of democracy. In total 250 people, mostly civilians, were killed by pro-coup soldiers, while over 2,000 people were injured.