More than 100,000 foreign terrorists backed by Iran continue their activities at around 230 locations in Syria, backing the Bashar Assad regime's in campaign against opposition fighters across the country

Iran continues to be one of the main actors in Syria with at least 120,000 foreign terrorists fighting in alliance with the Bashar Assad regime in the country's seven-year civil war. Tehran has been increasing its presence in the region with some 22 different groups surrounding Idlib from three directions, and the country is currently present in 232 points in Syria.

For a long time, the Assad regime has been conducting its military operations against the opponents in Syria not through its own army, but mainly through Iran-backed foreign terrorist groups. 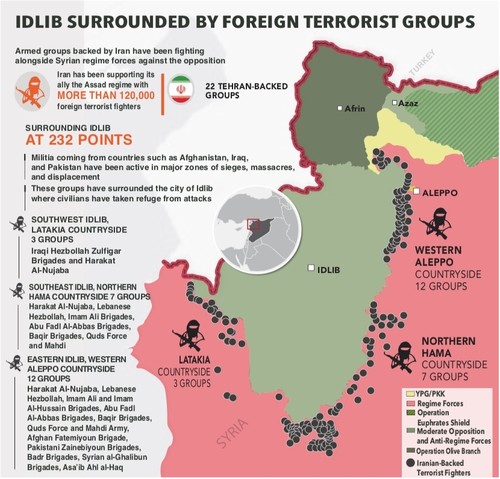 These groups are stationed predominantly in northwestern Idlib province, the capital city of Damascus, the western province of Homs, the countryside of eastern Deir ez-Zor province and particularly on the Lebanese border.

According to information compiled by Anadolu Agency (AA) reporters from the media outlets of the Iran-backed foreign terrorist groups, Iranian media and opponents in Syria, the Tehran administration started sending militias to Syria for the first time in the beginning of 2014.

Syrian opponents also fought with Iran-backed Hezbollah militias before. Hezbollah first gave support to the regime during its operations near the Lebanese border late 2012.

Six months later, the group announced its entity and support to the regime in al-Qusayr district of the countryside of Homs.

Apart from being involved in the war physically, the Revolutionary Guards provided training and logistical support to militias fighting in Syria.

Half of Iran-backed groups in Syria in or around Idlib

It is known that currently more than 120,000 Iran-backed terrorists are in Syria. Nearly half of these forces are already stationed around Idlib.

A total of 12 groups stationed in the east of Idlib and western Aleppo are as follows:

According to sources speaking to AA, these groups, which are deployed in Homs and Damascus will also come to Idlib in case of a possible military operation.

Iran lost senior figures during the operations conducted against its Syrian opponents.

According to the information compiled by AA from Iranian official and semi-official media outlets, at least 15 generals were killed since February 2013. Iran's heaviest loss in Syria was Hossein Hamadani, an Iranian Revolutionary Guard commander who was killed in Aleppo in 2015.