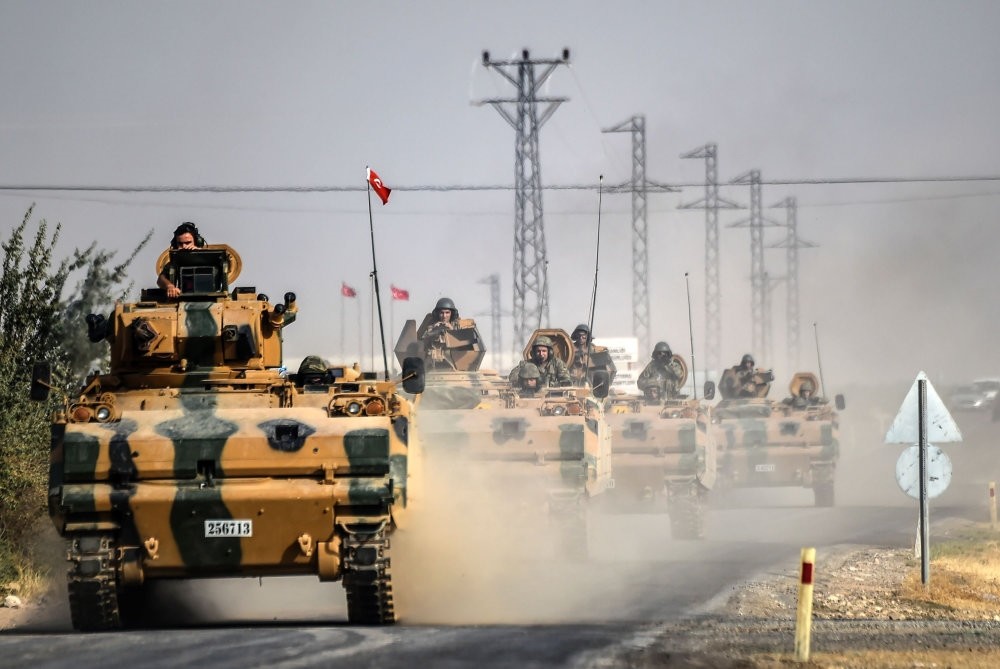 Turkish Army tanks driving to Jarabulus, a Syrian town on the Turkish border, 5 kilometers west of the Turkish border city of Karkamis in the southern region of Gaziantep, Aug. 25, 2016.
by Daily Sabah Sep 25, 2018 12:00 am

The number of safe zones for civilians in Syria will be increased, President Erdoğan said in New York, vowing to eliminate the U.S.-backed YPG terrorists from east of the Euphrates River in northern Syria

As part of Turkey's all-out fight against terrorist groups in Syria and the ongoing efforts to create stability and safe zones for civilians, President Recep Tayyip Erdoğan said Sunday that Turkey would increase the number of safe zones in the country, including east of the Euphrates, which is held by the PKK terrorist group's Syrian affiliate, the People's Protection Units (YPG). "In the areas once occupied by terrorists, now Syrian children can go to school without any fear. They [Syrians] do that now in Afrin, al-Bab, and Jarablus. God willing, we will increase the number of safe zones in Syria, in a way that will also cover east of the Euphrates," Erdoğan said during an event in New York City, organized by the Turkish-American National Steering Committee (TASC). Erdoğan is visiting the U.S. with a large delegation of ministers, state officials and figures from Turkey's business sectors, to attend the 73rd session of the United Nations General Assembly, where he is expected to deliver a speech today, and also hold other bilateral meetings on the sidelines of the General Assembly. "We will continue our struggle until threats posed by terrorism end and the gangs targeting Syria's future are rooted out," the Turkish president told the audience, which included representatives of non-Turkish Muslim communities in the U.S.

Ankara has repeatedly voiced concerns over the presence of Daesh and PKK's Syrian affiliate, the People's Protection Units (YPG) in areas close to its borders, in northern Syria. In line with the motivation to eliminate threats posed to its national security, Turkey previously launched Operation Euphrates Shield in August 2016, which ended in March 2017, clearing several Daesh-held towns of terrorists groups, including al-Bab, Jarablus, Dabiq, al-Rai and Azaz.

Similarly, the Turkish military launched Operation Olive Branch in January this year to eliminate YPG terrorists from northwestern Afrin province. Afrin was cleared of the YPG with the operation ending on March 18.

The eastern parts of the Euphrates River in northern Syria is held by the YPG, including Manbij, Hasakah, Raqqa, Tal-Abyad, Kobani and Qamisli. The group, with the support of the U.S., captured control of the region from Daesh terrorists. However, in areas under its control, it has exercised oppression on locals, including forced migration that affected demographics, as well as forced recruitment, using child soldiers, arbitrary arrests and other human rights violations.

As a result of eliminating terrorist groups, locals in the Olive Branch and Euphrates Shield regions have been relieved of terrorism and life has returned back to normal.

Local administrations have been setup and rebuilding of towns has been initiated by the support of Turkey, including schools, hospitals as well as infrastructure needed for daily life. In both operations, the Turkish military had backed the moderate opposition group, the Free Syrian Army (FSA) to conduct the operations. Erdoğan said a nearly 4,000 kilometer square area was cleared of Daesh and PKK affiliated groups to ensure that Syrians could live in safety and security.

Erdoğan voicing Ankara's intention to clear YPG from the Euphrates during a visit to the U.S. is significant as the group is supported militarily by Washington. The Turkish president also criticized the U.S. administration for supporting the YPG militarily under the pretext of fight against Daesh. Washington has supplied several thousand truckloads of weaponry and military equipment, despite the organic links between the YPG and the PKK. In addition to Washington's support for the YPG, Erdoğan also added that the U.S. is not meeting Ankara's demands of extradition for the leader of the Gülenist Terror Group (FETÖ), which is another matter of disagreement between the two countries, and said Washington's stance on the two groups was not in line with "strategic partnership."

"On the one hand, we ensured protection for our Syrian brothers who sought refuge in our country, on the other hand we put forward diplomatic channels to bring the war to an end," Erdoğan said at another event organized by the Türken Foundation in New York, and added that despite some disagreements with Russia and Iran, the process that was launched with the Astana talks was carried out and a concrete result was achieved with the Idlib agreement to prevent a massacre by the Bashar Assad regime.

Turkey had exerted intense diplomatic efforts to block a possible attack by the Syrian regime on opposition-held northwestern Idlib province, currently home to nearly 3.5 million people. In an agreement reached with Russia, Idlib has been designated as a demilitarized zone. Terrorists will be kicked out of the region, yet the opposition groups will remain where they are. The Idlib plan, which has received a significant amount of international praise, is expected to be executed by Oct. 15.

According to sources, in the case of an operation in the eastern parts of the Euphrates, four targets will be the priority against the YGP. The northeastern parts of the Euphrates River, including Tal Abyad, Kobani, Qamishli and Rasul Ayn, are expected to be the main targets of the operation to eliminate the YPG from the region and establish a new safe zone for the civilians. News reports have suggested that a military deployment of military vehicles started from Turkey's eastern Kars province to Akçakale district of southern Şanlıurfa province, which borders Tal Abyad.

Tal Abyad is known for its Arab and Turkmen population. Yet, the YPG has forcefully recruited local youth and children, creating anger among the tribes in the region. In the case of an operation on Tal Abyad, local tribes have also said that they would support Turkey's operation, which would make it difficult for the terrorist group to survive. The Turkish military has deployed a large number of tanks to Akçakale, which makes it possible that the first operation will be launched on Tal Abyad.

Kobani, also across from Şanlıurfa, is among one of the significant places for the YPG. The preparations for an operation on Kobani have long been in process. The preparations for an operation on Qamishli have been also ongoing in Nusaybin district of the southeastern Mardin province, which borders Qamishli in Syria. Ankara sees the presence of YPG in Qamishli, a province with close proximity to the Turkish border, as a threat that needs to be eliminated.

U.N. structure needs to be reformed to achieve justice

During his speeches, Erdoğan also criticized the structure of the U.N. by saying that the difference between the permanent and temporary members creates injustice within the organization.

"The world cannot be left at the mercy of five countries in the U.N. General Assembly, where there are [actually] more than 194 countries. There should not be a difference of the permanent and temporary members. If there will be, all 20 countries must be permanent numbers that alternate," Erdoğan said, adding that this way, every country from every continent and belief system would have the chance to be represented in the U.N.

"When this is achieved, then, there would be justice," he underlined.

Criticizing the embassy move of the U.S. from Tel Aviv to Jerusalem in Israel, Erdoğan stressed that Turkey has been in a wide ranged diplomatic struggle.

Turkey will continue its struggle against the U.S. and Israeli governments' infraction against the holy city at the "highest-level" of diplomacy, he said. He further highlighted that the struggle that Turkey has launched with the motto "Jerusalem is our red line," has gained support from other fellow states, achieving remarkable success.

"The decision that was taken in the U.N. General Assembly despite all the threats from the U.S. and Israel also proved the sensitivity of the international community over the issue," Erdoğan added.

On Dec. 6, 2017, U.S. President Donald Trump announced his decision to recognize Jerusalem as Israel's capital and relocate the U.S. Embassy from Tel Aviv to the holy city.

The shift in the long-standing U.S. policy on Jerusalem sparked angry demonstrations in the occupied Palestinian territories and many Muslim countries.

Following Trump's move, the U.N. voted on a resolution on Dec. 14, 2017. The resolution asserted that "any decisions and actions which purport to have altered, the character, status or demographic composition of the Holy City of Jerusalem [would] have no legal effect, are null and void and must be rescinded in compliance with relevant resolutions of the Security Council."