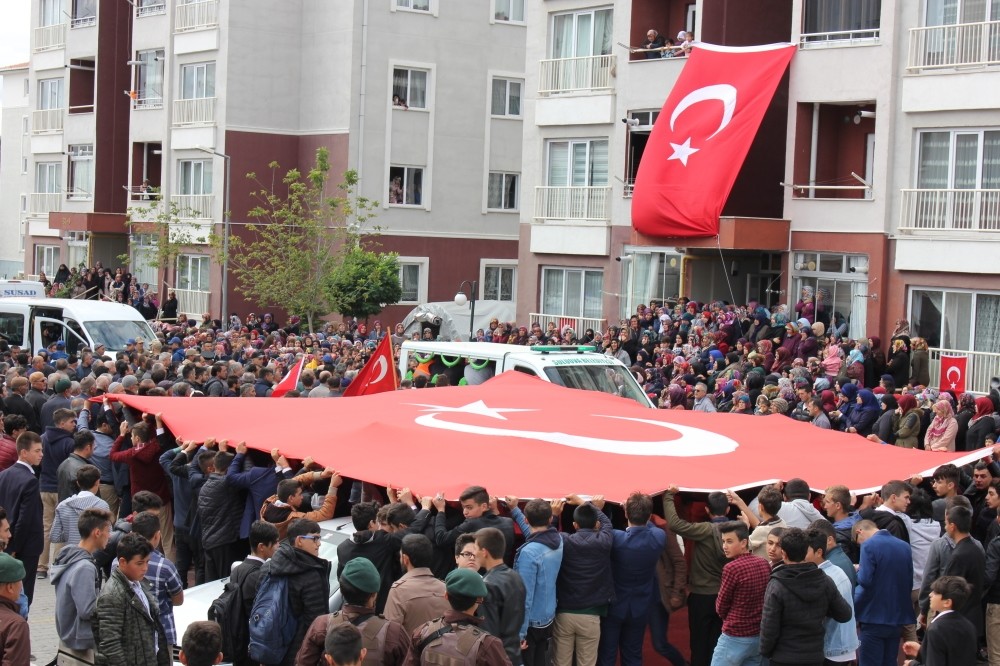 A large number of people gathered yesterday for the funeral ceremony of gendarmerie specialized Sergeant Su00fcleyman u00c7avuu015f in northern Amasya province, who was killed by the PKK attack in southeastern Batman province.
by daily sabah
Oct 06, 2018 12:00 am

Thousands united to protest PKK terrorism across Turkey on Friday, a day after eight soldiers fell victim to the bloody attack against security forces in the Hasankeyf district of southeastern Batman province. On Thursday, an improvised explosive device (IED) planted by PKK terrorists detonated when an armored military vehicle passed through the area where they were deployed on duty to ensure security for road workers, killing four soldiers and injuring five others. Four others succumbed to their wounds later at the hospital. Funeral ceremonies for the fallen soldiers were held in their respective hometowns after they were sent to their families in İzmir, Isparta, Antalya, Kırıkkale, Amasya, Balıkesir, Eskişehir and Ankara provinces.

Thousands participated in the funerals and held prayers. Mosques across the country also held special calls to prayer for the fallen soldiers.

In Batman province, thousands attended a rally yesterday condemning terrorism following the attack. In other provinces, schools, universities and the public held protests of the PKK.

The PKK, listed as a terrorist group by the United States, Turkey and the EU, has carried out bloody attacks against Turkey for nearly four decades, causing the loss of about 40,000 people.

"We will continue our struggle against terrorism with the same determination. The sacrifices our martyrs and veterans have made will not be in vain," President Recep Tayyip Erdoğan told a meeting on Wednesday at the Presidential Complex hosted by the Directorate General of Religious Affairs as part of Mosques and Religious Officials Week.

In addition, leaders and official representatives of opposition parties also condemned the terror attack in Batman.

Turkey will defeat terrorism "sooner or later" with its ongoing fight, said a senior official of the country's main opposition party. "Politics based on terrorism cannot get along with Turkey," said Akif Hamzaçebi, secretary general of the Republican People's Party (CHP), in Parliament on Thursday, following the attack. Nationalist Movement Party (MHP) Chairman Devlet Bahçeli also sent a message on his official Twitter account, condemning the attack.

The U.S. Embassy in Ankara and a U.S. State Department spokesperson sent messages on Twitter on Wednesday, condemning the PKK attack. However, their messages were criticized by social media users as the U.S. provides military support to the PKK's Syrian affiliate, the People's Protection Units (YPG).