Local people suffer atrocities under YPG terrorist group, want them out of Manbij 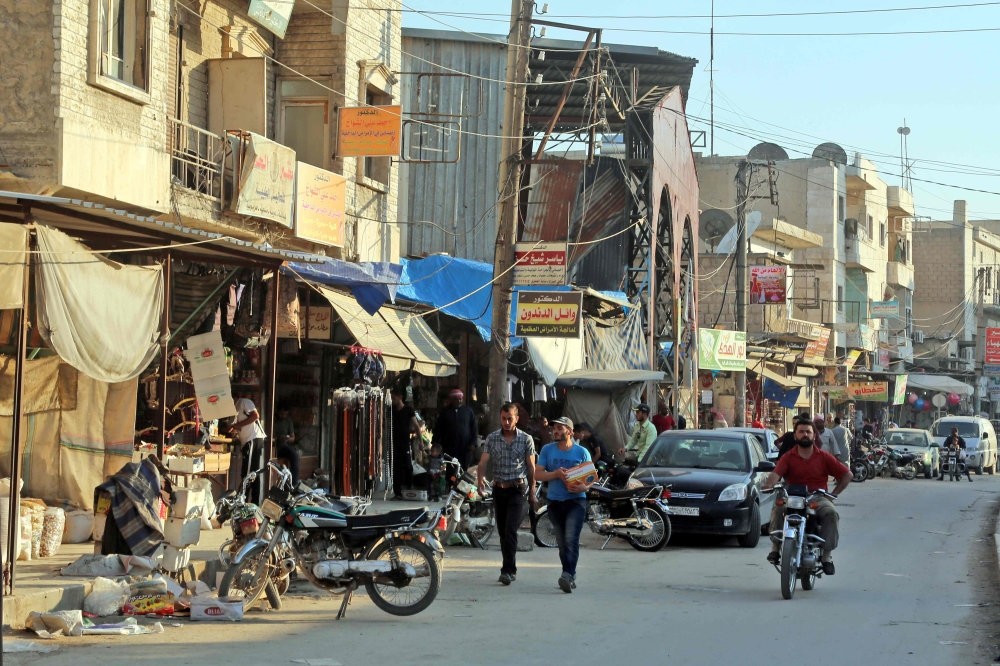 Despite the shared road map between Turkey and the U.S. that promises the YPG's removal from Manbij, the terrorist organization still has a presence in the province, disturbing the locals who have had enough

Local people in northern Syria's Manbij have demanded the departure of the PKK-affiliated People's Protection Units (YPG), and its main backer the United States, from the city.

Speaking to Yeni Şafak newspaper yesterday, Abdulkarim al-Fahel, a tribe leader in Manbij, said that locals want not only to drive the YPG, but also U.S. troops away from the city, due to Washington's continuous support of the terrorist group.

Pointing to the YPG's fear of Turkey's recent signals of a likely operation into territories east of the Euphrates controlled by the group, Fahel added that the YPG had started to collect taxes amounting to a whole years' worth in a day from the people of Manbij, which has caused unrest among locals.

Local people living in areas held by the group have long been suffering from YPG atrocities. Numerous human rights organizations have documented the YPGs violations of human rights including torture, recruiting child soldiers and burning civil buildings. The group also systematically and forcefully displaced Arabs from their homes in line with their "Kurdification" policy in traditionally Arab towns.

The YPG has organic organizational and operational links with the PKK, a group considered a terrorist organization by the U.S., the EU and Turkey. The YPG and PKK's ultimate aim is to establish an autonomous region in parts of Turkey, Syria, Iraq and Iran.

The power vacuum sparked by the Syrian civil war gave the YPG an opportunity to practically apply its form of governance and form communes as dictated by its ideology. After Daesh was cleared from the region with the help of the U.S., the YPG tightened its grip on the cleared areas by establishing nine committees for various roles, similar to ministries.

Moreover, last month the YPG formed a political entity called the General Council of Self-Administration in Northern and Eastern Syria, hinting at their autonomous plans. In July and August, the YPG held talks with Damascus in a bid to convince the regime to recognize an autonomous administration in the north and east of Syria, similar to the one in Iraq. In response to the YPG threat near its borders, Turkey launched two cross-border military campaigns in the past two years.

Following Erdoğan's remarks, the terrorist group constructed trenches and embankments in areas surrounding the city center and started to control entries and departures from the city in preparation of a likely Turkish operation. The U.S. also gave support to the YPG by providing three bulldozers, an excavator and armored cars to guard embankments, despite the Manbij deal inked by Turkey and the U.S. which focuses on the withdrawal of the terrorist group from the city.

FSA ready to support an

offensive against YPG in ManbijMeanwhile, the Free Syrian Army (FSA), the biggest legitimate opposition group in Syria, expressed its support for Turkey in case of an offensive against the YPG.

Adnan Ebu Faysal, the head of the military assembly of the FSA, said yesterday that the faction was ready in seven different locations to fight against 5,000 terrorists with more than 20,000 fighters, adding that they are preparing to put an end to the YPG's "invasion and pillage."

He pointed out that the YPG's sole assurance is U.S. protection, and Washington legitimizes terrorism in order to remain in Syrian territories. "An assembly whose sheer members are coming from Qandil [the headquarters of the PKK] cannot represent Manbij," he said.

Fahel stated that the terrorist organization also dug hidden tunnels that lead to Turkish borders in Manbij, and local people will provide all the information related to the hidden tunnels to Turkish officials, just like they did in previous Turkish operations. Fahel also said that they want to jointly administer the city with Turkish forces in the aftermath of an operation.

In relation to the preparations of the terrorist group to remain in the city, Erdoğan said: "Now, they are digging trenches in Manbij. What does that mean? 'We dug our graves, come and bury us.' We will also get in there." Accordingly, the Turkish Armed Forces (TSK) started independent patrols 500 meters away from Manbij yesterday.

Turkish-U.S. relations have been severely strained due to the latter's support of the YPG under the pretext of fighting Daesh. The U.S. had provided military traini

ng and given truckloads of military support, including radar systems, to the YPG, despite Ankara's security concerns.

In a bid to ease the diplomatic spat between the two countries, a deal was agreed upon on Manbij in June that set a three-month timetable to complete agreed upon tasks and see the terrorist group out of the city. However, the terror group has, on the contrary, stepped up its presence and activities in the area as the U.S. continues to drag its feet on the implementation of the deal.

The U.S.' support for the YPG and autonomous efforts by the latter were also condemned internationally.

Russian Foreign Minister Sergey Lavrov stated last week that the U.S. is seeking to illegally establish a "quasi-state" east of the Euphrates in Syria, and this is absolutely unacceptable.

Bashar Assad called the U.S.-backed YPG "traitors" on Dec. 18, while Iranian President Hassan Rouhani commented on Sept. 7 that, "We need to resolve the difficulty east of the Euphrates and force America out." Most recently, Iraq Foreign Minister Ibrahim al-Jaafari flew to Damascus to cooperate and discuss possible counter-steps against the autonomous efforts of the U.S.-backed YPG.