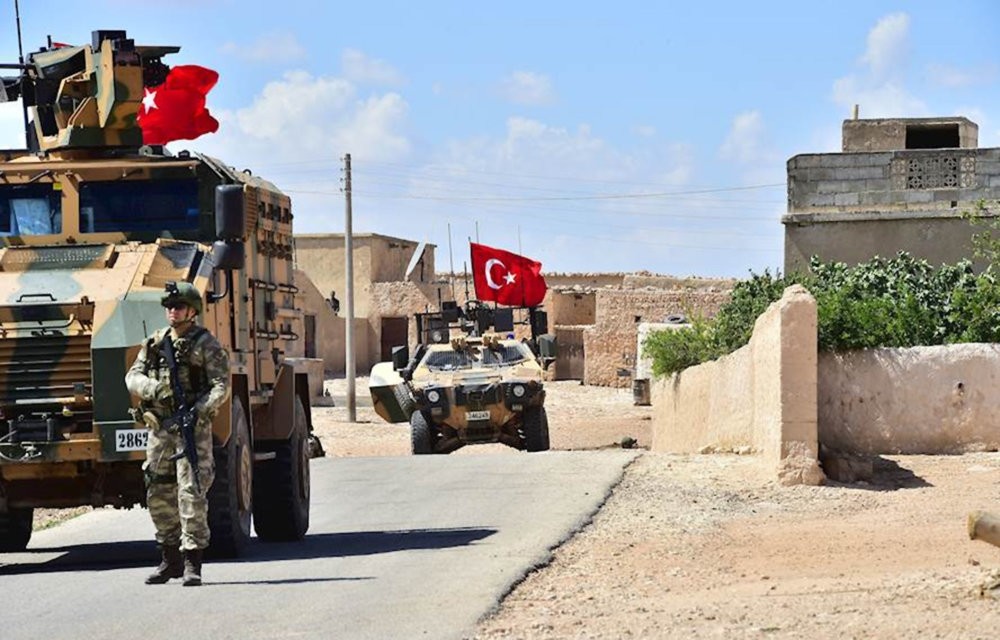 Turkishsoldiers accompanied by armored vehicles patrolling between the city of Manbij in northern Syria and an area it controls after a 2016-2017 military incursion, June 18.
by Daily Sabah Oct 18, 2018 12:00 am

The slow progress in the implementation of the Manbij deal is causing distress in Ankara, leading it to urge Washington to act in accordance with the deal while saying that in case of difficulty, Turkey can implement the deal by itself

Ankara reiterated its demand yesterday for the immediate implementation of the Manbij deal with U.S., saying that Turkish military can intervene if Washington has difficulties eliminating the PKK's Syrian affiliate, the People's Protection Units (YPG), from the region. Speaking at a press conference following U.S. State Secretary Mike Pompeo's visit to Ankara yesterday, Foreign Minister Mevlüt Çavuşoğlu said that President Recep Tayyip Erdoğan told Pompeo during the meeting that "Turkey is ready to eliminate terrorists in Syria's Manbij if the U.S. is facing difficulties."

He urged the country to implement the deal in accordance with the initial road map.

The Manbij agreement was signed between Turkey and the U.S. in early June that foresaw a three-month timetable for the withdrawal of the YPG from the northeastern Syrian province and joint patrols to be conducted by the militaries of both countries in order to establish stability in the region.

However, the continuing presence of YPG terrorists in the city has hindered the full implementation of the deal so far.

Expressing that the U.S. admitted the delay on execution of the agreement, Çavuşoğlu reminded that almost five months have passed since the Manbij deal was approved.

"Some delays is normal during the groundwork but there should not be a resistance from the army in the ground," Çavuşoğlu said, referring to International Coalition for Operation Inherent Resolve that is known as U.S.-led coalition, whose commanders' close relation with YPG is often drew criticism from Ankara.

screening soon, Dunford saysMeanwhile, U.S. Chairman of the Joint Chiefs of Staff Gen. Joseph Dunford said Tuesday the directive to ensure security in Syria's Manbij has been fulfilled and political screening there would begin soon.

"We believe that we have fulfilled the directive to ensure security in Manbij. We will soon be screening people in Manbij in the political section," Dunford told Pentagon reporters at a conference on countering violent extremism, alongside Brett McGurk, Washington's special envoy for combating Daesh.

Turkey wants the political administration of Manbij to be eliminated, which is called as city councils, consisted of the PKK associated people.

Instead of the current administration, Ankara insists on the city council of Manbij should be run by groups in line with their ratio of representation, pointing to past censuses in the city before demographic changes in the area. Manbij used to be considered a predominantly Arab city.

When asked by an Anadolu Agency (AA) reporter about the ongoing U.S.-Turkey coordination in Manbij, Dunford said the issue at hand now is carrying out joint patrols, stating that the directive given by President Erdoğan and his U.S. counterpart Donald Trump to secure the region has been completed.

"As for joint patrols - first, how to perform patrols, how to command and control. We need to develop a staff plan, including what will be the rules of engagement. Then we have to train the people we have chosen to perform these joint patrols," Dunford explained.

Dunford further argued that there is not an urgent timetable for the Manbij patrols.

"Obviously, we are moving forward with rational steps. This is not an urgent issue. The urgent security issues were addressed immediately," he said.

Dunford met with Turkish Chief of Staff Gen. Yaşar Güler in Washington on Monday to discuss security and stability in Manbij and cooperation in the fight against terrorism.

meets with Syrian oppositionWithin the framework of the eight-day Middle East Tour including Turkey, Qatar, and Saudi Arabia, U.S. Special Representative in Syria James Jeffrey came together with National Coalition for Syrian Revolutionary and Opposition Forces Chairman Abdurrahman Mustafa and senior officials of the organization on Tuesday, where he criticized Iran's presence in Syrian territories. The meeting organized for exchanging views on the remarks of the Sochi Agreement signed between Turkey and Russia on opposition-held Syrian province of Idlib, the safety and protection of civilians living in the region and issues such as the political process run under the control of the United Nations were also added to the agenda of the negotiations. "Syria needs to get rid of the image of a country that exports terrorism to its neighbors. Also, militia groups fighting on behalf of Iran should be removed from the ground," Jeffrey said.

The Sochi agreement between Turkey and Russia, which aims to demilitarize Idlib, signed last month to prevent a regime assault, has been welcomed internationally because it lessened the concerns of a possible humanitarian disaster.

For his part, Mustafa pledged support for political solution, saying that members of Syrian opposition should attend negotiation committee established by the U.N.

in case of offensive

Meanwhile the head of the military assembly of the Free Syrian Army (FSA), Adnan Abu Faisal, said they are ready to eliminate PKK and its affiliates from Manbij "in 20 days if they are instructed by Ankara."

"The FSA have sworn to bury the PKK in their own pits and return the area to real owners," Faisal said, recalling the words of Erdoğan, who said last week that, "Now, they are digging trenches in Manbij. What does that mean? 'We dug our graves, come and bury us.' We will also go there."

Faisal also called on U.S. to cease its infrastructure support to YPG.

Previously, Turkish soldiers and FSA fighters eliminated the Daesh terrorist threat from the border towns, including Jarablus, al-Bab, Azaz and Dabiq provinces of northern Syria in Operation Euphrates Shield which began in August 2016 and ended in March 2017.