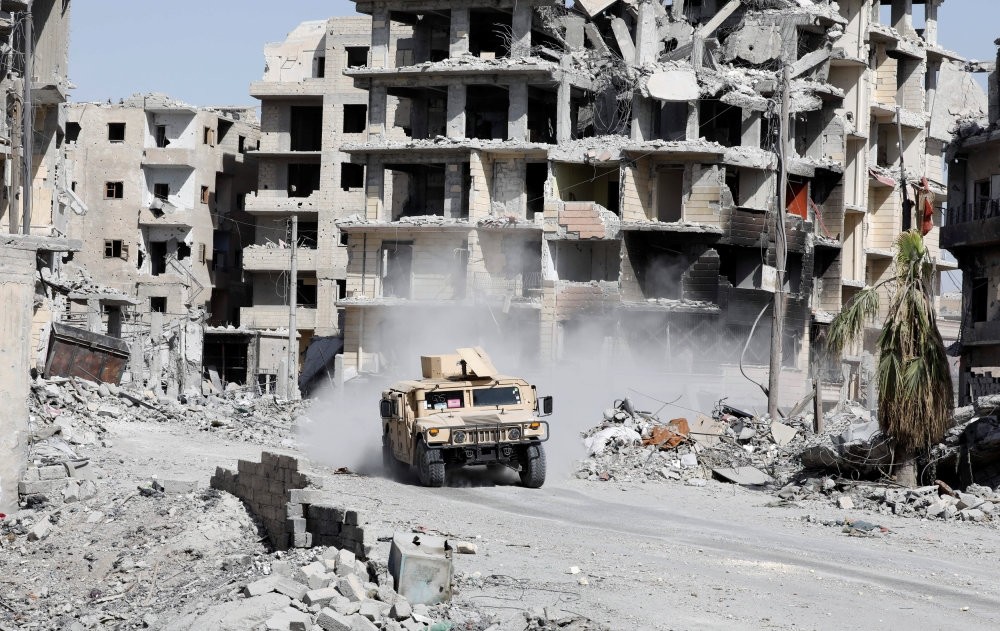 Local people in Raqqa have been protesting the U.S.-backed YPG, as the terrorist organization continues its brutal actions in the province, including killing local leaders

The killing of a local tribal leader in an alleged armed attack by the PKK's Syrian affiliate, the People's Protection Units (YPG), has escalated tensions in the northern Syrian province of Raqqa. Following the assassination of its leader Bashir Faisal al-Huwaidi, members of the Sabha tribe on Sunday called for a regional boycott of the YPG, which is being held responsible for the attack. Al-Huwaidi, who was known for his opposition to the terrorist group, was killed in Raqqa on Saturday. Many other regional tribes have also joined Sabha's condemnation of the attack, announcing their support for the boycott until the culprit is revealed.

Since May, the terrorist group has faced constant civil protest and armed conflicts with Raqqa's Arabs, who were once the majority in the province and now want the terrorists to hand over the governorate to local people.

Meanwhile, on Sunday, a car bomb exploded near a military position in Raqqa, local authorities and a war monitor said. Daesh announced that it was behind the blast. Raqqa security forces said a civilian had been killed and several people, including civilians and fighters, were injured. The war monitor, the Syrian Observatory for Human Rights, said the blast caused "a large number" of casualties. Daesh said in a statement that it had detonated the bomb, targeting members of the YPG, the strongest element in the U.S.-backed Syrian Democratic Forces (SDF) group that drove Daeash out of Raqqa last year.

For the past year, the YPG has oppressed and terrorized Raqqa's local population, as it has in other areas under its control. The terrorist organization has occupied the province since taking it from Daesh in 2017. For three years, Raqqa was the de facto capital of Daesh's "caliphate" stretching across much of Iraq and Syria. It has forcibly recruited civilians into its ranks and has prevented many local residents from rebuilding their homes, many of which were destroyed last year by intense coalition airstrikes. The YPG does not provide any public services, while residents accused of having links with the opposition frequently face arbitrary detention. In a report published last December, the U.K.-based Syrian Observatory for Human Rights said a total of 2,323 civilians had been killed in Raqqa in the period from November 2016 to October 2017. U.N. officials say Raqqa has been left the most devastated city in all of Syria's seven-year-old war, a conflict that has also seen Syrian regime forces backed by Russian and Iranian forces battling the opposition. All of Raqqa suffered intense airstrikes by the U.S.-led coalition and at least 350,000 people had to flee.

The U.N. envoy for Syria Staffan de Mistura said Sunday that the completion of a new constitution would accelerate the reconstruction process of the country.

Speaking at a meeting in Egypt, titled "The Building Mechanisms of States and Societies, Following War and Conflict," de Mistura said that many European countries have the intention to support the reconstruction process in Syria, underlining that these countries would choose this option rather than hosting the refugees.

De Mistura steps down this month after four years of peace efforts that led nowhere. His latest efforts focused on negotiating a joint regime-opposition committee to draft a new Syrian constitution. The regime largely rejected those efforts, saying they amounted to meddling in its internal affairs.

Foreign minister Mevlüt Çavuşoğlu also remarked on the issue, saying that Turkey is in close cooperation with other actors to form the new construction in addition to its field operations in the country. "We are working hard to enable refugees to voluntarily return to the safe zones in Syria," Çavuşoğlu said. Thanks to Turkey's efforts, many Syrian refugee families are returning to their liberated hometowns. The Cilvegözü Border Gate in southeastern Hatay province is the most preferred route to return to Syria. Last month, approximately 5,000 Syrians used the gate, while between January and October, the total number was 31,950.