US does not recognize YPG as terrorist group: Syria envoy Jeffrey 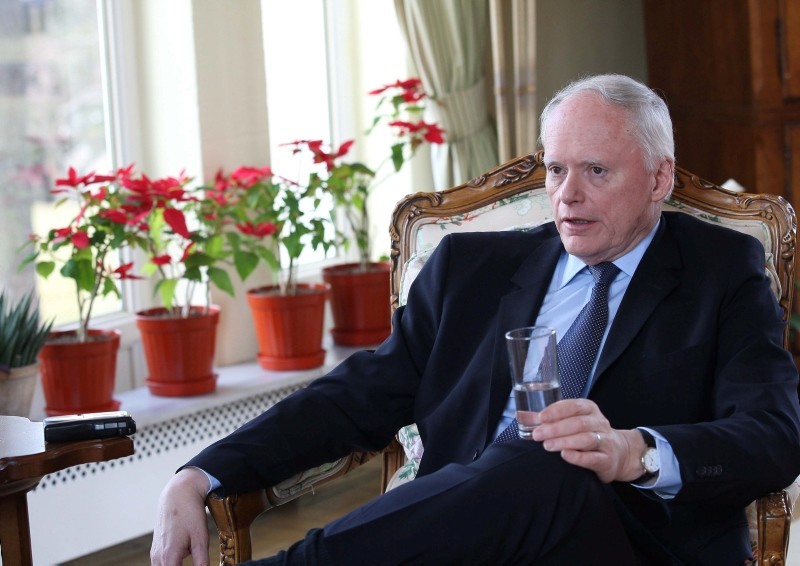 Jeffrey's statement came after a question about the U.S.' conflicting approach as Washington, which considers the PKK a terrorist organization, announced a combined $12 million reward for senior PKK leaders while backing its Syrian offshoot YPG by providing training, arms and military equipment.

On Tuesday the U.S. Department of State's Rewards for Justice program authorized up to $5 million for information on PKK's acting leader Murat Karayılan, $4 million for Cemil Bayık and $3 million for Duran Kalkan.

Jeffrey said that while the U.S. "understood" Turkey's security concerns regarding the ties between the PKK and YPG, it does not consider YPG to be a terrorist group.

"Our position on PKK is clear, but we do not classify YPG as a terror organization. We never did," Jeffrey said.

"We understand Turkey's security concerns. We understand the concern over ties between PKK and YPG. That's why we are acting very, very carefully. We inform Turkey about what we do and why we do it."

In regards to U.S.-Turkey joint patrols in Syria's Manbij, Jeffrey said Washington would do everything to thwart any potential threats toward Turkey.

"We will do everything to stop any threats from northern Syria toward Turkey. We are very, very carefully eliminating arms we supplied to the (Syrian Democratic Forces) SDF over Turkey's concerns," Jeffrey said.

Jeffrey said Washington's priorities in Syria are the elimination of Daesh and removal of Iranian forces from the region.

Jeffrey's assertion comes in sharp contrast to earlier statements in which he recognized the clear link between the PKK and Democratic Union Party (PYD) and its armed branch, the YPG, and even criticized U.S. military support to the YPG.

Jeffrey, the United States ambassador to Turkey from 2008 to 2010, was appointed and sworn in as Washington's Special Representative for Syria Engagement in August. Ankara expressed approval for the appointment at that time.

Presidential Aide Ibrahim Kalın said Wednesday that Turkey considers every support given to the PYD and YPG as a direct or indirect support to the terror group PKK.

"Turkey's main expectation from the U.S., which is our NATO ally and strategic partner, is to end its all engagements with PYD/YPG, the Syrian branch of the PKK terror group," Kalın said following a cabinet meeting at the Presidential Complex.

"It is a futile effort from the U.S. to describe the PYD and YPG -- which they used to describe as the Syrian branch of the PKK -- as a legitimate group which has no links with terrorism and the PKK," Kalın said.

To date the U.S. has sent a total of 4,700 heavy weapons and armored vehicles to the YPG.