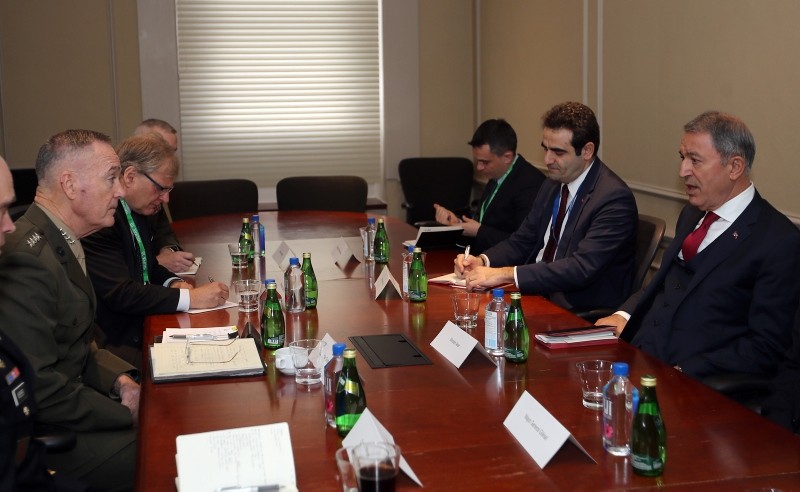 The meeting between Akar and Dunford on the sidelines of the Halifax International Security Forum in Canada lasted nearly an hour.

"We reiterated that we expect [the U.S.] to immediately cut ties with the terrorist YPG, which is no different the PKK," Akar said after the meeting, adding that YPG's presence in northern Syria and U.S. soldiers spending time with the terrorists was "inappropriate."

Dunford and other U.S. officials were also told that the U.S.' relationship with the YPG was disturbing for Turkey even if it was only tactical and temporary, the defense minister said, referring to earlier comments by a top U.S. official regarding the nature of U.S.-YPG ties.

A senior U.S. official told Daily Sabah on Wednesday that Washington has "temporary, tactical and transactional" relations with the YPG, emphasizing that the U.S. understands Turkey's security concerns and supports Syria's territorial integrity.

Speaking about photos of U.S. soldiers having a U.S. Veterans Day dinner with the PKK-linked terrorists, Akar said: "We warned against recurrence of such images."

"We also pointed out that giving trucks and airplanes full of weapons and ammunition to the terrorist YPG does not fit with the understanding of [the Turkish-U.S.] alliance," he said.

Stressing how the terrorist group YPG has attacked Turkish security forces and caused deaths of innocent civilians, Akar reiterated his hope that the U.S. will correct its mistake.

Akar previously met with several U.S. senators in Halifax on Saturday, telling them that Ankara was expecting the U.S. military to cut ties with the YPG as soon as possible.

The U.S. support for the PKK terror group's Syrian affiliate — the YPG — is an issue that has long infuriated Ankara and strained ties between the NATO allies.