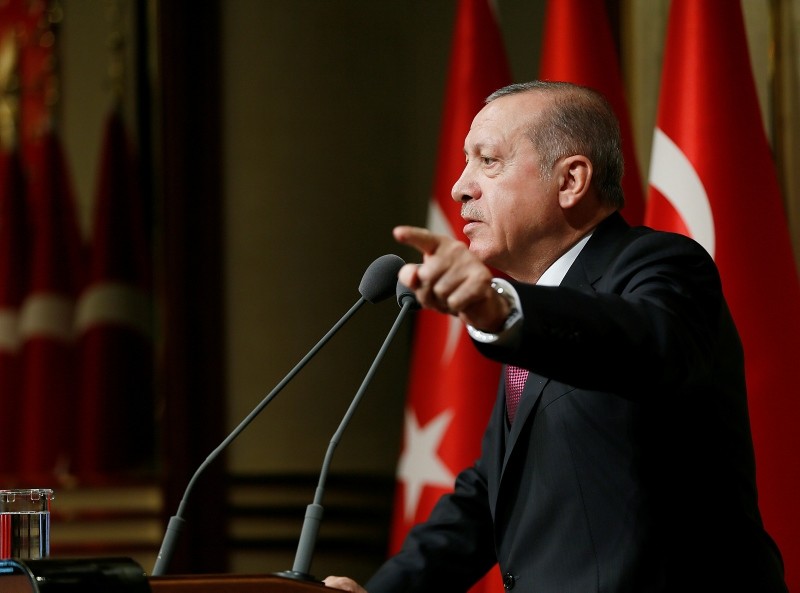 President Recep Tayyip Erdoğan criticized the European Court of Human Rights (ECtHR) Wednesday for its ruling on Selahattin Demirtaş, the jailed former leader of the pro-PKK Peoples' Democratic Party (HDP), for ignoring his role in riots that resulted in the killing of 50 people in southeastern Turkey.

The ECtHR ruled Tuesday against the pre-trial detention of Demirtaş. He has been in pre-trial detention since November 2016 after him and other executives and deputies of the HDP refused to show up in courts after they were stripped of their parliamentary immunity. They were later arrested on terrorism charges.

"The ECtHR reached a verdict against our country yesterday, saying Turkey violated freedom, security and elections rights of the PKK-affiliated party leader. Did you ever see a statement from an EU institution on the death of 50 innocent people who were brutally killed in riots that were incited with erroneous speeches?" Erdoğan said.

The judges of the ECtHR ruled that although there was "reasonable suspicion" in the arrest of Demirtaş, the judicial grounds cited in the extension of his detention could not be regarded as "sufficient."

The court unanimously ruled that his right to a speedy trial was violated. The Strasbourg-based court also said that Demirtaş's rights to free elections were violated as he could not perform his duties as a member of Parliament or take part in elections as the head of the HDP.

The president was referring to the riots on Oct. 6-7, 2014 in southeastern provinces and several cities in the west including Istanbul. Demirtaş is accused of inciting hatred in the unrest, which erupted at the height of Daesh terrorist attacks on northern Syria's predominantly Kurdish border town of Ayn al-Arab, also known as Kobani, which is now controlled by the PKK's Syrian offshoot People's Protection Units (YPG).

Following Demirtaş's call to take to the streets, more than 50 people were killed and hundreds of others were injured in clashes between security forces and the sympathizers of the HDP/PKK and the right-wing Free Cause Party (HÜDAPAR).

Erdoğan also criticized the EU's indifference on the free roaming of the Gülenist Terror Group (FETÖ) and PKK suspects in member states.

"The countries, who have been embracing FETÖ members that attempted a coup in Turkey, have no right to speak about democracy," he stressed.

The president added that Turkey cannot "take seriously" those who support the PKK despite being recognized as a terrorist organization by the EU itself but are sparing their solidarity with the victims of these terrorists.

Turkey has long accused European countries of being irresponsible about its calls for cooperation against FETÖ, which is blamed for perpetrating the July 15, 2016 coup attempt that killed 251 people, and the PKK terrorist group, which has been carrying out a terror campaign against the state for 40 years.