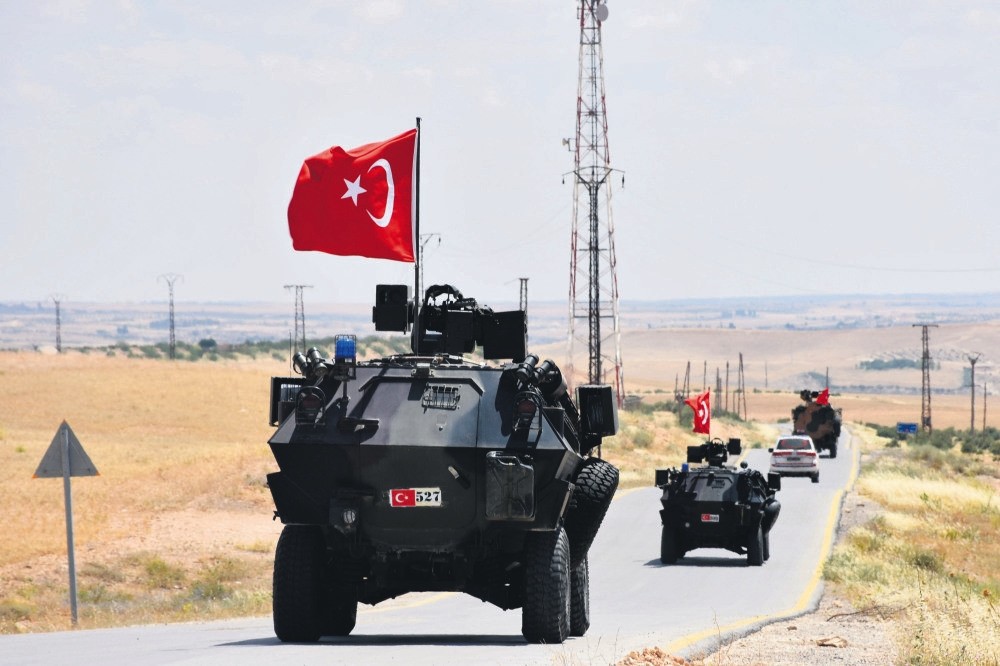 Turkish security forces near Manbij, northern Syria, during independent patrolling, as part of the agreement with the U.S., June 22.
by Özgenur Sevinç Nov 24, 2018 12:00 am

The presence of YPG terrorists in northern Syria poses a threat to Turkey's national security, and Ankara will take the necessary steps to eliminate them, Foreign Minister Mevlüt Çavuşoğlu said

Turkey would not tolerate the presence of the People's Protection Units (YPG), the terrorist PKK's U.S.-backed Syrian wing, along Turkey's borders, including east of the Euphrates River in northern Syria, the foreign minister said Friday, adding that the region will be handed over to its rightful local owners once the terrorists are cleared.

Foreign Minister Mevlüt Çavuşoğlu said in a televised interview on Friday that Turkey will take all the necessary steps to eliminate existing threats on the southern side of its border.

"The YPG needs to retreat from the region. The YPG will be ousted from [northeastern] Ayn al-Arab and the region will be handed over to the people living there," he emphasized.

The YPG functions under the Syrian Democratic Forces (SDF), which is heavily backed by Washington under the pretext of fighting Daesh; a U.S. policy Ankara says helps instability and the growth of terrorism in the region. Turkey sees no difference between the PKK, a group also listed on U.S. and EU terror lists, and the YPG in Syria, as the two groups are organically linked and have fluid movement of members between their lines.

Referring to his recent visit to the U.S., Çavuşoğlu said Ankara keeps up dialogue with officials in the U.S, discussing various issues and what needs to be done in Syria.

The foreign minister also stressed that the Manbij road map agreement with the U.S. has been sluggish, saying, "The Manbij road map needed to be completed by the end of this year." He added that once it is implemented there, the east of the Euphrates will be rid of the YPG as well.

In an effort to address Turkey's concerns, Washington joined the Manbij agreement in June with Ankara, which focuses on the withdrawal of YPG terrorists from the northern Syrian city of Manbij to stabilize the region.

Since implementation of the deal has been sluggish, Turkey called on the U.S. to take the necessary steps to accelerate the efforts. In accordance with the Manbij agreement, Turkish and U.S. troops began joint patrols on Nov. 1. Since June 18, the Turkish Armed Forces (TSK) have carried out 68 unilateral patrols in Manbij.

"Turkish officials have been urging the U.S. to increase the number of patrols and repeatedly calling for the U.S. to end its partnership with YPG terrorists," a high-level diplomatic source told Daily Sabah on the condition of anonymity.

The source underlined that there has been a change in U.S. rhetoric, saying: "Previously, the U.S. was highlighting that the endgame in Syria was the defeat of Daesh. However, now they have been saying that they will continue to remain in Syria in order to prevent the terrorist group from coming back."

The source stated that while U.S. Secretary of State Mike Pompeo seems to be more understanding regarding the concerns of Turkey, there is a divergence in the views of various U.S. institutions on Syria, and it is difficult to tell Washington's real objective.

US NEEDS TO END PARTNERSHIP WITH YPG

Çavuşoğlu stressed that the U.S. should completely end its cooperation with a terrorist organization "as an ally of Turkey."

"Unfortunately, the U.S. continues to engage with the terrorist organization presenting unfounded reasons," he said.

The relations between the two NATO allies went into a tailspin when the U.S. opted for partnering with the terrorist group despite Ankara's highly vocal criticism.

In relation to the U.S.' recent statements to establish observation posts in northern Syria, Çavuşoğlu said if the U.S. made this decision to protect the YPG, it will be in vain.

Commenting on the issue, the diplomatic source said that anyone who had the slightest information on Syria is aware of the organic link between the PKK and YPG.

Explaining why the YPG poses a threat to Turkey's national security, the source gave the example of the indoctrination of children by the terrorist group in Syria. In primary school textbooks published and distributed by the YPG/PKK in Syria, it was seen that the PKK members who carried out terror attacks in Turkey were introduced as "heroes" and "martyrs," the source said.

The source added that in the textbook, Zeynep Kınacı, code named "Zilan," the first suicide bomber of the PKK, was introduced as a "heroine." The terrorist was responsible for the deaths of eight Turkish soldiers during a military flag hand-over ceremony on June 30, 1996 in Tunceli, Turkey. The source stressed that this shows the clear link between the two terrorist groups using the same rhetoric and pointed out that they are creating grave security threats for Ankara by indoctrinating small children.