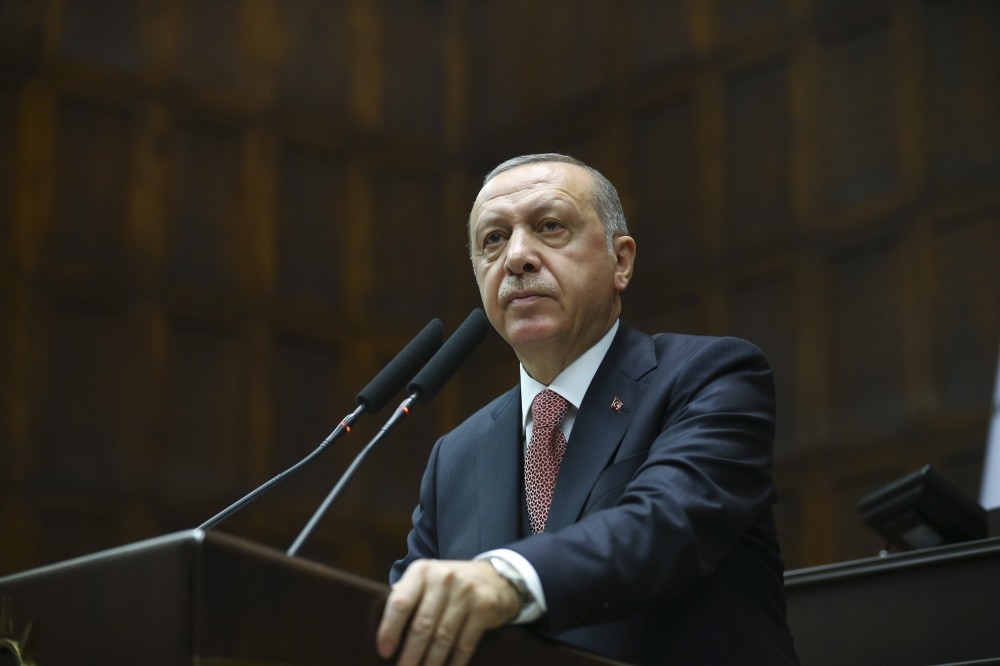 President Recep Tayyip Erdou011fan addresses members of his ruling AK Party during a meeting in Parliament yesterday.
by Daily Sabah Nov 28, 2018 12:00 am

Ankara's allies act as shields for terrorists groups in Syria targeting Turkey's national security, President Recep Tayyip Erdoğan said yesterday, as he criticized U.S. military support to the PKK's Syrian affiliate under the pretext of fighting Daesh. "Terrorists who have shown enmity against our country clearly are the only targets for us. This is an opportunity for those claiming to be allies, strategic partners who want to strengthen relations politically, economically and militarily and carry them into the future. We will acknowledge that they side with Turkey when they no longer stand as shields in front of terrorists groups," Erdoğan said during his address to his ruling Justice and Development Party (AK Party) lawmakers in Parliament.

In his criticism, the president was implicitly referring to the United States, which supports the People's Protection Units (YPG) militarily as its partners against Daesh in Syria. Washington's Syria policy has angered Ankara as the latter sees no difference between the PKK, a group listed on terror lists by the U.S. and EU, and its Syrian branch, the YPG.

"The sole target of this terrorist group, which is the Syrian branch of the PKK, is our country. We can no long stand idle against this threat," Erdoğan said, and also added that Turkey will take the necessary action if the U.S. does not take into consideration Ankara's security concerns regarding the continued arming of the YPG.

The president has said previously that the YPG has received thousands of truck-loads of weaponry from the U.S. and that these weapons will ultimately be used against Turkey, given the organic links between the PKK and YPG.

"It is clear that the aim of those arming tens of thousands of people is not the fight against terror as there is not even one Deash element left along Turkey's borders," Erdoğan said, referring to the ongoing U.S. partnership with the YPG in northeastern Syria, south of the Turkish border. Erdoğan also said several issues, including developments in Syria and the fight against terror, were expected to be discussed in yesterday's National Security Council (MGK) meeting. The meeting, which began at 4.05 p.m., was still continuing when Daily Sabah was sent to press.

Turkey has said it will clear its borders from all terror groups, including Daesh and YPG. Yet, the U.S. partnership with the group in some areas has complicated the possibility of cross-border operations by Turkey as the troops of the two NATO allies can come into armed confrontation.

In June, Turkey and the U.S. agreed to work on the withdrawal of the YPG from Manbij, a YPG-held region in northern Syria. The aim with the Manbij deal is to ensure security and stability in the province through elimination of YPG terrorists and ultimately handing the administration of the province to a body consisting of locals. Yet, the progress of the deal, Ankara says, has been "sluggish" and slower than initially planned, due to what has been described as ingenuity of the U.S. over the plan. The U.S. insistence on supporting the YPG has led to a lack of trust in Ankara in bilateral relations. Turkey recently been voicing that it will launch a cross-border operation in the eastern parts of the Euphrates River, a region held by the YPG in northern Syria.

Erdoğan also said that there were no more Daesh fighters left in Syria except several small gangs kept alive to continue destabilizing Syria and the region, he added that the only genuine fight against Daesh was carried out by Turkey. The president described the Daesh terrorist group as "one of the greatest concerns of Islam."

"While everyone sought their interest on Syrian soil using Daesh as an excuse, we took all the risks, entered the field and struck this terror group down hard," the president said and continued: "As Turkey, we commit to the complete removal of the leftovers of this organization [Daesh] within a couple of months."

Recently the U.S.-backed YPG has been clashing with Daesh in Deir ez-Zor, eastern Syria. The U.S. Special envoy to Syria James Jeffrey said recently that the fight against Daesh will be coming to an end soon as the group is eliminated. U.S. troops, however, will remain in the region, Jeffrey had said on Nov. 7.