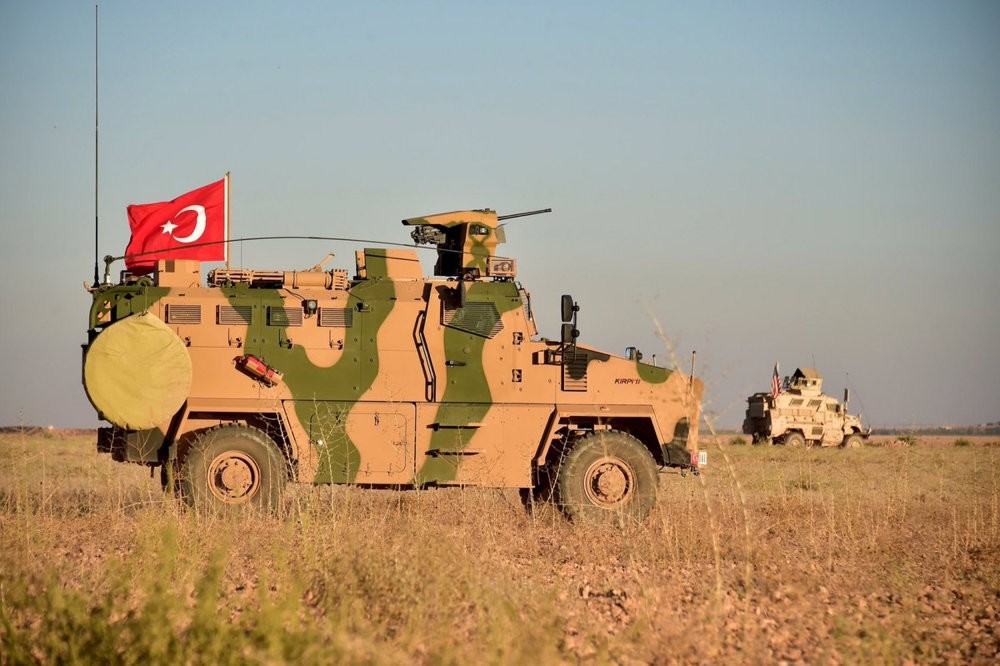 Although the Manbij road map has already fallen behind its initial schedule, drawing criticism from Turkey, the U.S. still insists that the implementation of the road map is continueing

The U.S. Special Representative for Syria Engagement James Jeffrey said on Monday that a group of PKK-affiliated People's Protection Units (YPG) terrorists have left northern Syria's Manbij. Turkey has long been waiting for the complete withdrawal of the terrorist group from the region as part of a road map, which has so far been behind its initially scheduled time.

"We're also in the process now, under what we call the Manbij road map, that Secretary Pompeo and his counterpart Foreign Minister [Mevlüt] Çavuşoğlu agreed [on] in June; to vet senior leadership in the Manbij Military Committee," Jeffrey told reporters on Monday after indicating that 50 members of the organization recently left the region.

Yet, while some minor steps have been taken in Manbij, Ankara has been underlining that a complete resolution would remain elusive if the U.S. continues playing down the significance of Turkey's security concerns and drags the completion of the agreed plan.

In a bid to face threats emanating from the presence of the YPG in Syria, Turkey seeks to fully implement the Manbij road map, which was first announced in early June and aimed to establish security and stability in the city by clearing out YPG forces. The deal envisages the withdrawal of the YPG from the city and joint patrols to be conducted by the militaries of both countries. YPG forces first acquired the city in 2016 with the help of U.S-led coalition forces.

In line with the deal, Turkish and U.S. troops carried out the second round of training for combined patrols in Manbij, northeast of the Aleppo Governorate in Syria on Dec. 2. The Turkish Armed Forces said on Twitter: "In accordance with the Manbij Road Map and Security Principles, Turkish and U.S. Armed Forces troops completed the second joint training on combined patrol activities in Manbij."

Turkish and U.S. troops began joint patrols in Manbij on Nov. 1 as part the Manbij agreement.

"Our policy is to work with the people of the northeast first of all to defeat ISIS [Daesh]. We have to do some basic humanitarian work and local stabilization work in order to have a platform for this defeat of ISIS. We have no political agenda either with the Kurdish groups, with the Arab groups, or with any other groups inside Syria," Jeffrey said.

Yet, the U.S.' steadfast support of the YPG in the fight against Daesh, which is nearing its end, raises questions in Ankara about the main objective of the U.S. in Syria. The presence of the YPG terrorist group along Turkey's Syrian borders and ongoing U.S. partnership with the group have strained Turkish-U.S. bilateral ties that have yet to recover. Despite Turkey's highly vocal criticism of the YPG and the threat they pose to Turkey's national security, the U.S. has been beating the drums about the YPG's role in the fight against Daesh, prompting a backlash from Ankara.

President Recep Tayyip Erdoğan has frequently criticized Washington's Syria policy and partnership with the YPG, saying the U.S.' steps in Syria are against the claimed strategic partnership with Turkey.

In relation to the issue, Nationalist Movement Party (MHP) Chairman Devlet Bahçeli underlined yesterday during his weekly group meeting in Parliament that Turkey and the U.S. are allies and have responsibilities to each other.

Referring to the U.S.' decision to establish observation posts in Syria along Turkey's borders, Bahçeli stressed that it is incompatible with its alliance with Turkey. "Who does the U.S. protect and from whom does it protect?" Bahçeli asked slamming the U.S. move.

Ankara is wary of the U.S. plan as it is considered to be a step to protect the YPG and a veil for its ongoing activities in Syria. Bahçeli also added that Ankara will make no concession until the east of the Euphrates is cleared.

Combined Joint Task Force Operation Inherent Resolve spokesman Army Col. Sean Ryan said on Nov. 27 that the aim of these posts is "to further deny escape routes to the Islamic State of Iraq and Syria [Daesh]."

its missionMeanwhile, Jeffrey also called for ending the Astana process, which was launched by Turkey, Russian and Iran aiming to find a resolution to the Syrian crisis, a remark that was rejected by the Kazakh foreign minister.

Commenting on the remarks of Jeffrey, Kazakh Foreign Ministry spokesman Aybek Smadiyarov said yesterday that they believe "the Astana process has been completely fulfilling its missions."

He also highlighted that the de-escalation zones formed as part of the Astana agreements have been contributing to restoring stability. Smadiyarov said the efforts for turning life back to normal in Idlib have been continuing and stressed that the guarantor states are in close cooperation.

Russia, Iran and Turkey launched the Astana peace process in the Kazakh capital of Astana in January 2017 as a complementary part of the U.N.-sponsored peace talks in Geneva. It brought all warring parties in the Syrian conflict to the table to find a political solution. The 11th round of Astana talks were held on Nov. 28-29 addressing the issues stemming from the ongoing Syrian civil war. Following the talks, Turkey, Russia and Iran have stressed their commitment to Syria's territorial integrity and rejected separatist agendas targeting the country's sovereignty. "The participants rejected all attempts to create new realities on the ground, under the pretext of combating terrorism, and expressed their determination to challenge separatist agendas aimed at undermining Syria's sovereignty and territorial integrity as well as the national security of neighboring countries," read a Turkish Foreign Ministry statement on Nov. 29.