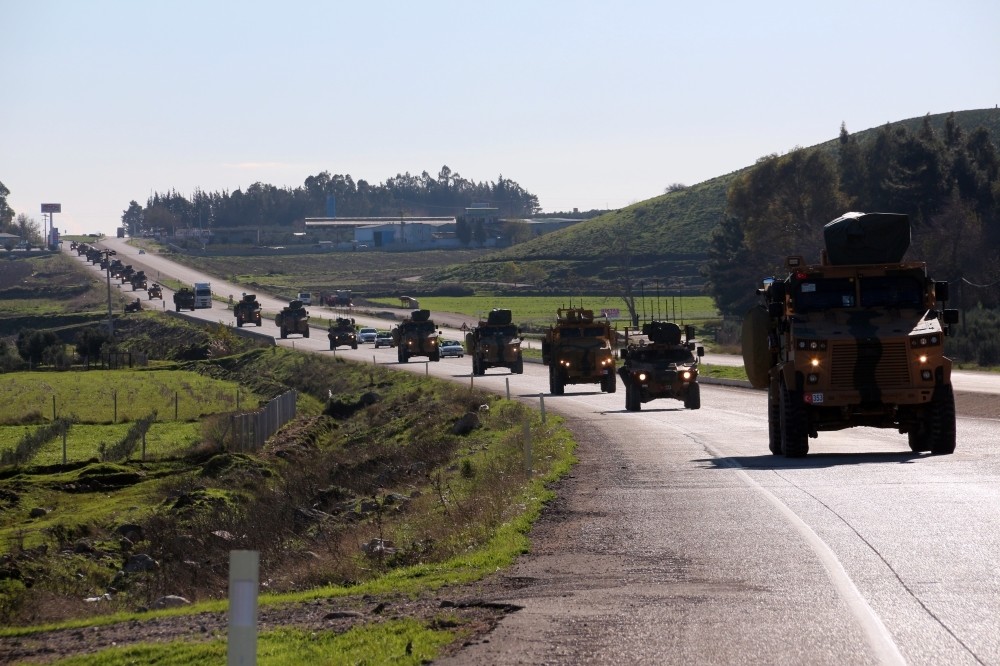 Turkish military reinforcements arrived in the border province of Hatay yesterday, as part of preparations for an offensive east of the Euphrates.
by Şeyma Nazlı Gürbüz Dec 14, 2018 12:00 am

It has been years since Turkey first told the U.S. that there was no difference between the PKK and YPG as both are terrorist organizations, calling on Washington to halt its support for the latter. However, after being ignored by the U.S. numerous times on the matter, Ankara must now take its own measures to preserve its national security

Two days ago news of a brand new Turkish military operation east of the Euphrates River in northeastern Syria, where the PKK's Syrian affiliate, the People's Protection Units (YPG), has long been enjoying dominance, became the hot topic of the day. However, despite the striking effect on the news, an offensive in the region has been long-awaited by many and been implied more than once by state authorities, as the security threat on Turkey's border with Syria has been escalating to an unacceptable point.

So much so that, according to experts, currently, Ankara has no other option than to initiate an operation against terrorist elements that dominate the border region if it wants to preserve the country's national security.

President Recep Tayyip Erdoğan announced on Wednesday that an operation to clear the eastern parts of the Euphrates River from terrorists will be launched in a few days.

Speaking at the Turkish Defense Industry Summit held at the Beştepe Presidential Complex in the capital Ankara, Erdoğan said, "It is time to realize our decision to wipe out terror groups east of the Euphrates." The president made this statement at the launch of the Turkish defense industry's T625 multipurpose helicopter "Gökbey," in the presence of many senior Turkish soldiers.

"This [the YPG threat] has become a question for Turkey's survival. That is why it [an operation against the YPG] can no longer be delayed," said Mete Yarar, a security expert, adding that Turkey has reached the end of its patience on the matter.

The president's statement also indicated that Turkey will not remain unfazed in the face of serious terror threats posed against the country from its Syrian border, as the U.S. provides support to the YPG.

"The decision to launch an operation to the east of the Euphrates is an ultimatum to the U.S.," said Kurtuluş Tayiz, a journalist, adding that Turkey is taking this decision at the risk of confronting the U.S. However he underlined that in his opinion, the U.S. would remove its soldiers from the region as it did before Operation Olive Branch.

A mission east of the Euphrates would follow two successful cross-border Turkish operations into Syria, Operation Euphrates Shield launched in August 2016 and Operation Olive Branch launched in January 2018, which were meant to eradicate the presence of YPG and Daesh terrorists near Turkey's borders.

To date the U.S. has sent more than 4,700 heavy weapons and armored vehicles to the YPG, despite warnings by Turkey. Thanks to this support, in total, approximately 28 percent of Syrian territory is under control of the YPG. Almost all the territory east of the Euphrates, comprising some one-third of the territory of Syria, except for the Bashar Assad regime-controlled area near the eastern city of Deir el-Zour and the Daesh-held area near the Iraqi border, is controlled by the Syrian Democratic Forces (SDF), an umbrella group dominated by the YPG. The SDF also controls the districts of Manbij and Tabqah on the right bank of the river.

President Erdoğan highlighted that the target of the operation would never be American soldiers on the ground, but the terrorists alone, showing that Turkey will do its part as an ally, while expecting similar treatment for itself.

Regarding the possibility of a confrontation with the U.S., Yarar said that Turkey's determination would be key in avoiding it.

"Military options are not there to eliminate the political options. Turkey is not burning diplomatic bridges by launching this operation," said Yarar, indicating that if Turkey remains determined, a common point with the U.S. can likely be found.

Previously, Ankara had repeatedly called on the U.S. to put an end to its support for the YPG and be a proper ally by backing Turkey instead, implying that it is ready to eliminate Daesh from the region and there is no need of using one terrorist organization to defeat other.

"As Turkey, our expectation from the U.S. is for it to act according to the spirit of the alliance in every single area," Vice President Fuat Oktay said on Monday, pointing out that Ankara has been using all diplomatic means to end Washington's help to the YPG.

However, the U.S. insisted on its attitude toward the YPG while assuring Turkey through several statements of its aims to "ensure" that the YPG will not cause any problems, not only today but in the future as well.

The U.S. also repeated many times that its support will only continue until Daesh is defeated. Yet, as time passed by, Daesh was mostly eliminated and still no change occurred in the U.S.' attitude. Even the U.S. President Donald Trump recently acknowledged that Daesh is mostly defeated while other U.S. officials were stating the determination of continuing to back the YPG in Syria.

Erdoğan's announcement did not have a different response from the U.S., as the country expressed that an offensive against the YPG would be "unacceptable."

"Unilateral military action into northeast Syria by any party, particularly as U.S. personnel may be present or in the vicinity, is of grave concern," said Pentagon Spokesman Cmdr. Sean Robertson on Wednesday, adding that they "would find any such actions unacceptable." He said "coordination and consultation between the U.S. and Turkey is the only approach to address issues of security concern in this area."

The U.S. military is committed to working closely with the Turkish military to boost cooperation and coordination, Robertson said, adding that "uncoordinated military operations" will undermine that shared interest. "We have solemn obligations to one another's security. We are fully committed to Turkey's border security," he said while adding that the U.S.-led coalition is working closely with the YPG, which he said is "in the midst of offensive operations against Daesh in the Middle Euphrates River Valley."

Despite Daesh's defeat, the SDF continues to use the terrorist organization as an excuse. Yesterday, Nuri Mehmud, spokesperson for the SDF, said that a Turkish offensive would "negatively impact" the fight against Daesh.

Apart from calling on the U.S. to cut its support for the YPG, Turkey also made an agreement with the country on June to eliminate the terrorists from Syria's Manbij. The deal foresees a three-month timetable for the withdrawal of the YPG from the province and joint patrols be conducted by the militaries of both countries in order to establish stability in the region. However, the U.S. has been dragging its feet on the implementation of the deal for some time now, leading Turkey to take its own measures to secure itself.

Foreign Minister Mevlüt Çavuşoğlu said on Monday that despite all the delays, the Manbij deal and similar deals for east of the Euphrates should be implemented to ensure stability in the region, showing Turkey's willingness to provide security in the region with the help of the U.S.

"When it is understood that the U.S. was wasting Turkey's time in Manbij, there was no reason left for Ankara to wait any longer to take the decision for an offensive," Tayiz said.

Meanwhile, following Erdoğan's announcement, military reinforcements reached the border province of Hatay while YPG called the Bashar Assad regime, which the U.S. was once aiming to overthrow, for support against Turkey, according to the media outlets close to the terrorist organization. The YPG previously called the Bashar Assad regime for support, during Operation Olive Branch. However, regime forces retreated from Afrin following artillery attacks by the Turkish military.