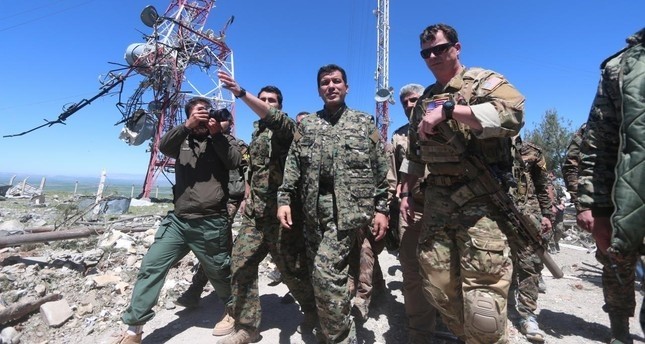 A U.S. military commander (R) walks with a commander (C) from the Kurdish People's Protection Units (YPG) as they inspect the damage at YPG headquarters after it was hit by Turkish airstrikes in Mount Karachok near Malikiya, Syria. (Reuters Photo)
by Daily Sabah Dec 16, 2018 12:00 am

The U.S. has been aiding PKK-affiliated Syrian Democratic Forces (SDF) for years by supplying military equipment and training to the organization, despite designating the PKK a terrorist group and NATO ally Ankara's objections.

Turkey shares a 711-kilometer (442-mile) border with Syria and considers the presence of the YPG on its southern border a grave threat to its national security.

Even though the CIA and U.S. Secretary of Defense officially recognized the links between PYD/YPG and PKK, Washington continues to ignore Turkey's repeated calls to sever ties with the terrorist organization and instead bolster its cooperation with Ankara.

In January, CIA officially confirmed that its sees the PYD as the Syrian wing of the terror group PKK. Under its "The World Factbook" section and Syria subcategory, the agency listed the PYD as a PKK branch under foreign-based terrorist groups.

Similarly, former Secretary of Defense Ashton Carter confirmed the link between YPG/PYD and the PKK while testifying before a Senate panel at the U.S. Congress in April 2016.

Carter confirmed there were "substantial ties" between YPG and the PKK. He also acknowledged that the PKK is a designated terror group by the U.S., Turkey and the EU.

The US is Turkey's ally, but is arming Turkey's enemies right on its border with Syria pic.twitter.com/UBfKh6YCL5

In its more than 30-year terror campaign against Turkey, the PKK has been responsible for the deaths of some 40,000 people, including women and children. Washington says it backs the group in its fight against Daesh. However, with Daesh almost completely defeated, even with U.S. President Donald Trump admitting on Tuesday that "very few" of Daesh terrorists left in the area the U.S. continues to train more than 30,000 SDF troops and supply truckloads of weaponry to the organization.

The U.S. said it won't supply heavy weaponry to the group and once Daesh threat is eliminated, all the current arms would be collected — a statement Ankara doubts as the U.S. has been ramping up its support for the group instead of decreasing it.

The U.S. has been installing radar and observation posts in Syria, which President Recep Tayyip Erdoğan says were there to protect terrorists from Turkey, where it should have been the opposite.

On Wednesday, Erdoğan said Turkey could no longer ignore growing security concerns near its borders and would carry out a military operation east of the Euphrates River in Syria in the next few days.

"It is time to realize our decision to wipe out terror groups east of the Euphrates," Erdoğan said.

"There is not a Daesh threat in Syria anymore," Erdoğan also said during his speech, stressing that Turkey will no longer tolerate terrorist activities along its border.

"They are talking about a 150-kilometer zone where they [Daesh] are active. If it is about this zone, Turkey is ready to immediately eliminate any Daesh presence in the area," he said.

The second operation cleared the YPG from Afrin, bolstering the security of southern Turkish provinces of Hatay, Gaziantep and Kilis.

The operations not only provided security to the areas cleared from terrorist groups, but also allowed hundreds of thousands of Syrians returned to their homeland since basic government services were re-initiated.