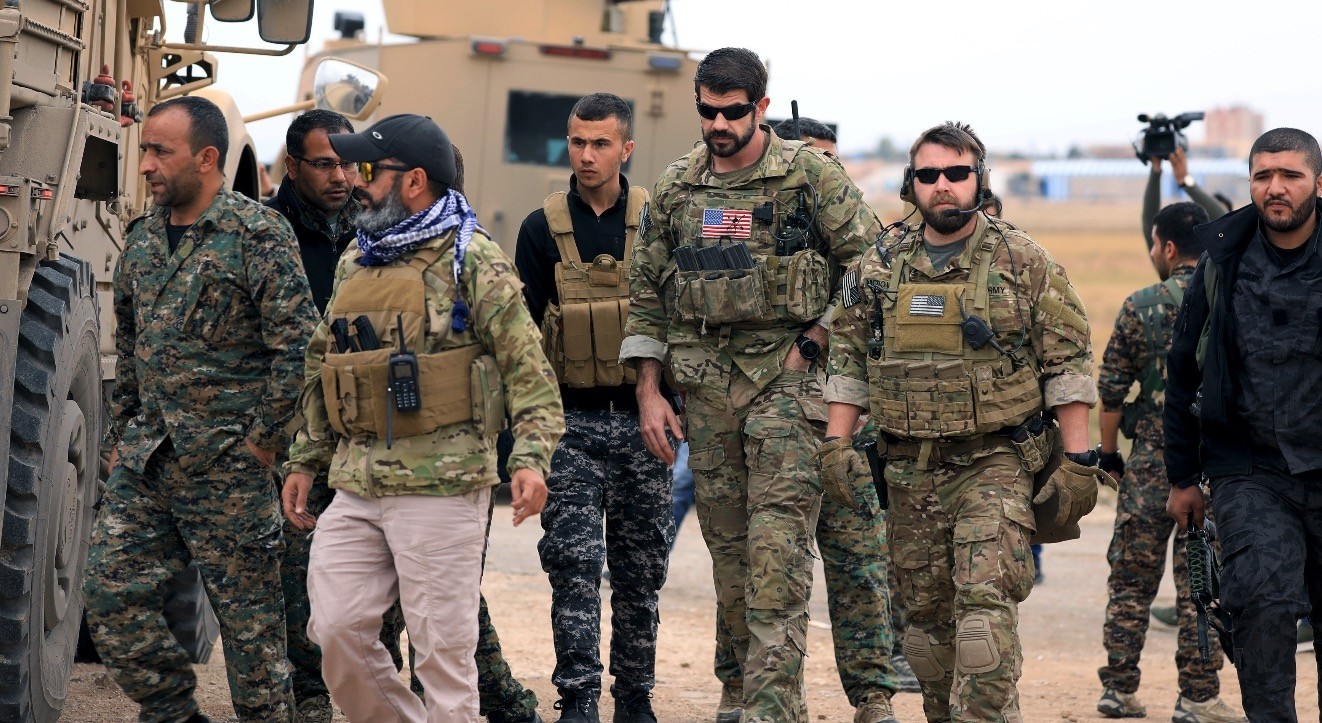 Despite the long-time alliance between the two countries, the U.S. is not hesitant in burning bridges when it comes to choosing between the YPG terrorists or Turkey in Syria

The United States looks poised to side with the PKK's Syrian affiliate, the People's Protection Units (YPG) terrorists against its NATO ally, Turkey, ahead of an upcoming offensive by the Turkish military to the east of Euphrates River that aims to preserve the country's national security while removing terrorist elements from the region. According to Anadolu Agency (AA) reports yesterday, U.S. officials have called on the Free Syrian Army (FSA) and the National Coalition for Syrian Revolutionary and Opposition Forces (SMDK) to not support the planned offensive.

"Any participation by the Syrian National Coalition or the FSA in any way is an attack on the U.S. and the coalition forces, and it will lead to direct confrontation with coalition forces and the U.S. that will fully destroy the relations between the U.S. and the Syrian National Coalition and the Free Army," the message said. After President Recep Tayyip Erdoğan said Wednesday that Turkey would launch an operation within days to the east of the Euphrates to clear the region of the YPG, the SMDK has voiced its support for the planned offensive.

On Saturday, Abdurrahman Mustafa, head of the coalition, said that the Syrian people continue to suffer at the hands of the Bashar Assad regime forces, as well as the Iranian Revolutionary Guard Corps, Hezbollah and the YPG.

Any military operation to eliminate these terror groups will be welcomed and supported by the SMDK, Mustafa said, adding: "We are working with our Turkish ally to liberate all cities and towns from the control of terrorist forces."

He also spoke against the separatist agenda of PKK-affiliated groups in northern Syria. "We share this view with the Turkish Republic that the separatist projects and terror constitute a direct threat to Turkey's national security as well as to Syria's territorial integrity and unity," Mustafa said.

The FSA has participated in two Turkish offensives in northern Syria – Operation Olive Branch and Operation Euphrates Shield. The first was launched by Ankara to clear its borders of Daesh terrorists while the second was launched to prevent the YPG's ultimate plan to establish an autonomous region in northern Syria by connecting the northwestern Afrin canton to the Kobani and Jazeera cantons in the northeast.

Washington's message to opposition forces also emphasized that the U.S. forces and YPG-dominated Syrian Democratic Forces (SDF) are intertwined, "so SDF cannot be attacked without aggression and confrontation with Coalition Forces and U.S. forces and advisers."

"When elephants dance, you must stay away from the dance floor," the message also warned.

Responding to U.S. threats, Ayman al-Asimi, spokesman of the Syrian opposition, told AA yesterday that they are resolute on supporting Turkish offensive no matter what the U.S. says.

Asimi said on his Twitter account that the YPG constitutes a danger against international security and hinder the political solution in Syria, adding that the operation will be another phase of the previously-conducted Operation Olive Branch and Operation Euphrates Shield "to protect Syria's territorial integrity."

Turkey recognizes the PKK and YPG as organically linked terrorist groups. The U.S., however, while listing the PKK as a terrorist group, has supported the YPG militarily, under the pretext of fighting Daesh. The U.S., despite Ankara's warnings, previously supplied truckloads of military support to the YPG, which functions under the SDF.

The YPG terrorists, which occupy a 480-kilometer (298 mile) area on the Turkey-Syria border, also recently increased its activities against a possible offensive with the construction of trenches and barricades.

Commenting on the YPG's activities along Turkey borders, Erdoğan on Saturday warned the terrorist group that those tunnels and trenches would become their graveyards if they continue to disrupt peace in the region and threaten Turkey's national security.

He reiterated that Turkey was "determined to bring peace and security" to areas east of the Euphrates river in northern Syria.

Erdoğan also said yesterday that Turkey is determined in continue its counterterrorism operations.

Speaking at an inauguration ceremony for the July 15 National Park in the Esenler district of Istanbul, Erdoğan said: "We are always in the terrorists' minds. We are burying them [the terrorists] in the trenches that they dig and will continue to do so."

The YPG also called on the Bashar Assad regime earlier this week to stand together against Turkey's possible offensive, following new military reinforcements to Turkey's border province of Hatay.

The terrorist organization had made a similar call to the regime during Operation Olive Branch in January; however, the regime forces and Iranian-backed paramilitary groups retreated from Afrin after the beginning of the Turkish operation.

Also, local sources said that the U.S. has started to intersperse coalition forces among YPG terrorists near border towns to prevent them being targeted by Turkish artillery and airstrikes. Erdoğan reportedly told U.S. President Donald Trump in a phone call on Friday to pull U.S. troops from border areas.

Regarding the operation, the European Union's Foreign Policy Chief Federica Mogherini on Saturday asked Turkey to refrain any unilateral military action in Syria.

"The statements of a possible Turkish military operation in northeast Syria are a source of concern," she said in a statement.

FM: We may work with Bashar Assad if he wins democratic elections

Foreign Minister Mevlüt Çavuşoğlu said yesterday that everyone, including Turkey, should consider working with Syria's Bashar Assad if he wins a democratic and credible election in Syria.

He added that Turkey is trying to help Syrians come up with a constitution for the embattled country. "This process should be under the scope of the United Nations. It should be inclusive. Everyone should be given their rights. It should include everyone inside and outside Syria. It should include those who are located in my country, in other countries, as refugees. There should be transparent and democratic elections. After these elections, Syrians should decide who should run their country," said Çavuşoğlu speaking at the 18th Doha Forum in the Qatari capital Doha.

The civil war in Syria erupted in 2011 when the Assad regime harshly responded to protesters, who had poured onto the streets to demand more rights and freedom. The protests initially emerged following the Arab spring demonstrations resulted in the step down of strongmen in Egypt, Tunisia and Libya. The cruelty against protesters triggered a rebellion in significant parts of the country, turning into a brutal civil war before long. So far an estimated half a million people have been killed in the war. Around 6 million people have been displaced internally and another 5 million were driven abroad as refugees.

Turkey has backed moderate opposition forces against the Bashar Assad regime since war broke out in 2011.

Even though Bashar Assad, whose family has been in power for nearly five decades, managed to stay in power thanks to massive Iranian and Russian military support, large parts of Syria still remain outside of his grip, including regions in the north, under Turkish control, and in the east, ruled by the YPG.