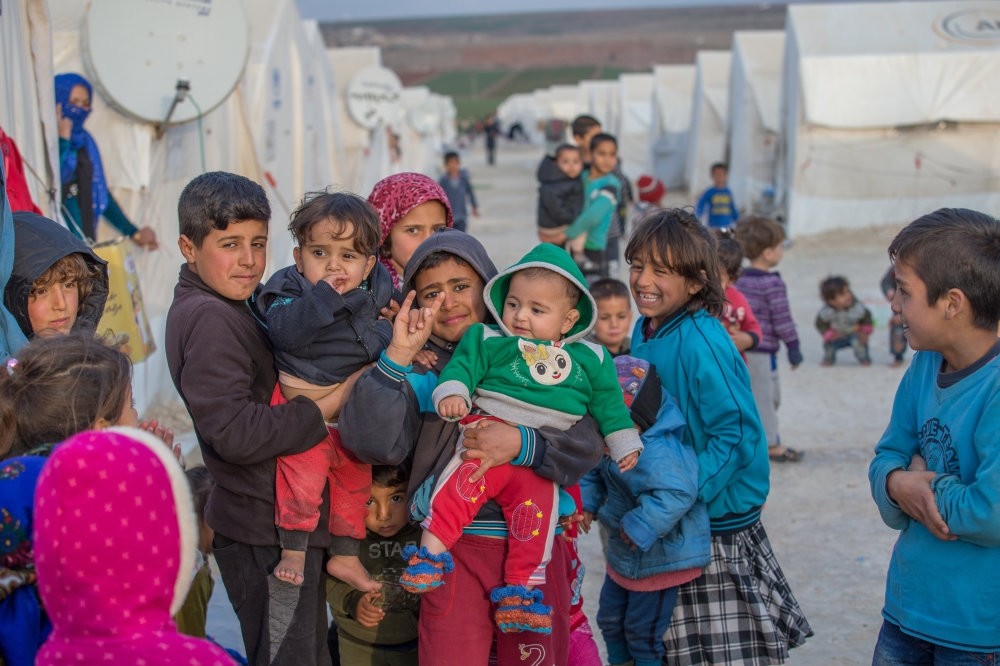 Children of Syrian Kurdish families who escaped from YPG-dominated areas and took refuge in Turkey pose at a camp in the southern province of u015eanlu0131urfa, Dec. 3.
by Daily Sabah Dec 18, 2018 12:00 am

Thousands of Syrians who took refuge in Turkey, escaping from the PKK's Syrian affiliate People's Protection Units' (YPG) brutalities, are looking forward to an upcoming Turkish military offensive to the east of the Euphrates, seeing it as a hope to return to their homes after years of displacement. Last week's announcement of the Turkish military operation aiming to liberate the east of Euphrates from terrorist elements is highly welcomed by Syrian refugees in Turkey, who underlined their expectation of returning to their hometowns. "If Turkey's operation into the east of the Euphrates becomes successful, we, people of Tal Abyad and Raqqa can return to our cities," a Syrian refugee told Sabah daily. "Turkey helps us a lot here, but we want to return to our country. [This operation's announcement] made us happy and we will go back to our country when it is liberated," another one added, with both expressing their enthusiasm.

Since 2011, Turkey has received a constant flow of displaced Syrians fleeing the conflict and their numbers have expanded from mere thousands to millions. Currently, there are more than 3.5 million Syrian refugees in Turkey, which is the highest number in the world. Over 475,000 of these Syrian refugees came from YPG-controlled areas of the war-torn country, while another 300,000 fled from the atrocities of the terrorist organization and took shelter in Iraq.

"Approximately 400,000 local people went to Turkey when Daesh attacked Ayn al-Arab and its adjacent areas. Even after four years, why can't local people go back to their homes? Because they know that the YPG is terrorizing these areas," Osman Milo, Turkey's representative on the Syrian Kurdish National Council, said.

Pointing out that thousands of people returned to their homes following Turkey's cross-border operations in Syria, Milo underscored that the same will happen after security is established east of the Euphrates.

Although the majority of the displaced are from Kurdish or Arab origins, there are also Turkmens among them, who also wish to return to their homes. Speaking on the matter to Daily Sabah, the head of the Syrian Turkmen Assembly, Muhammed Vecih Cuma, whose hometown is the northern province of Manbij, said there is no difference between the Bashar Assad regime, Daesh or the YPG in terms of brutality.

"They are using guns to oppress us. They are exacting money from the locals. Even my home in Manbij is currently occupied by YPG terrorists. The locals in Manbij had to leave the city since they couldn't taken it anymore," Cuma said, adding that at least 60,000 people have left Manbij so far and all are expecting to return as soon as possible.

"We all resisted Bashar Assad for our liberties. However, the YPG, [which replaced Assad's forces in the region], acts in the same way," he underlined, indicating that Turkey's offensive will not only be a military operation but will also turn into a popular uprising since the locals are more than willing to resist the terrorists alongside the Turkish army.

The conflict in Syria that started in 2011 has killed hundreds of thousands of people and forced more than 5 million people to flee, while more than 7 million are internally displaced. Refugees mainly took shelter in Turkey, Jordan and Lebanon, with Turkey hosting the largest number. Some have sought to reach Europe via the Aegean and Mediterranean seas, but hundreds have died en route to Greece and other littoral countries.

Previously, Turkey has conducted two offensives in northern Syria, Operation Olive Branch and Operation Euphrates Shield. The first was launched by Ankara to clear its borders of Daesh terrorists while the second to prevent the YPG's ultimate plan of establishing an autonomous region in northern Syria by connecting the northwestern Afrin canton to the Kobani and Jazeera cantons in the northeast. Following the operations, Turkey has been also involving in efforts to rebuild the towns' infrastructure, as well as health and educational institutions. Schools are being renovated and a hospital is being built. Turkey also helps local people build olive oil facilities in the town where agriculture is the main source of income for residents.

Thanks to the success of both operations and the post-operation developments in the liberated areas, the numbers of refugees returning to their hometowns have increased in recent months. More than 281,000 Syrian refugees have returned home since 2016.

Meanwhile, President Recep Tayyip Erdoğan said yesterday in central Anatolia's Konya province that he talked to U.S. President Donald Trump regarding the presence of terrorists in northern Syria and the operation east of the Euphrates, saying that his American counterpart responded positively to the issue.

Erdoğan stated that, "Along the 500-kilometer border, particularly avoiding harming the American soldiers on the ground, we might start the operation in Syria any moment," adding that the strategic partnership with the U.S. requires terrorist groups to be ousted from the region.

Referring to the U.S., which is backing the terrorists under the pretext of fighting Daesh, Erdoğan said "You are doing wrong."

"If they [the YPG terrorists] do not leave, we will oust them because they are threaqtening us," Erdoğan added, highlighting that Turkey is resolute in targeting terror threats directed at Turkey.

As the date for the operation nears, opposition forces in the regions are expressing their willingness to support the Turkish military in its fight against terrorism. The special units of the Hamza Division, a military faction of the Free Syrian Army (FSA), has completed military training of its 6,500 fighters and stressed that it is ready to provide support in the operation against the PKK's Syrian affiliate the YPG.

Saif Abu Bakr, a Hamza Division military chief, told Sabah daily yesterday that the special unit has been continuing its efforts to support the upcoming operation and are waiting for instructions from Turkey. "We have completed the training of our special units. We are grateful to Turkey for its efforts to clear terrorists from east of the Euphrates," he said.

The fighters were provided special training in several fields, including hand-to-hand fighting, combat in rough terrain, stamina and the use of light and heavy weapons.

The latest process of the restructuring of the FSA was the launch of the Syrian National Army, founded in December 2017, consisting of approximately 30 subgroups linked to the FSA. The army, which is estimated to have 15,000 soldiers, aims to protect the area that was liberated in Operation Euphrates Shield and Operation Olive Branch, as well as to defend civilians against the Syrian regime and groups like Daesh and the YPG.

Responding the U.S. threats directed at opposition groups on refraining from participating Turkey's operation, Abu Bakr said they intend to fight terrorists, not the U.S. army, and they "do not fear anyone."

"I want to emphasize that our main targets are YPG terrorists. There has been ongoing persecution. We want to bring back peace to the Arab and Kurdish brothers living at that region," he said.

According to Anadolu Agency (AA) reports on Sunday, U.S. officials have called on the FSA and the National Coalition for Syrian Revolutionary and Opposition Forces (SMDK) to not support the planned offensive.

Ayman al-Asimi, spokesman of the Syrian opposition, also responded to U.S. threats on Sunday, saying that they are resolute on supporting the Turkish offensive no matter what the U.S. says.

The opposition forces in Idlib are also supporting Turkey's offensive; the National liberation Front, also part of the FSA, announced yesterday in a written statement that they will side with the Turkish military against the YPG.

After Erdoğan said Wednesday that Turkey would launch an operation within days east of the Euphrates to clear the region of the YPG, the SMDK voiced its support for the planned offensive.

The FSA participated in both of the previous Turkish offensives in northern Syria. Commenting on the YPG's activities along Turkey's borders, Erdoğan on Saturday warned the terrorist group that those tunnels and trenches would become their graves if they continue to disrupt peace in the region and threaten Turkey's national security.

He reiterated that Turkey was "determined to bring peace and security" to areas east of the Euphrates river in northern Syria.