YPG prohibits locals from leaving Manbij, forcing them to fight against Turkey 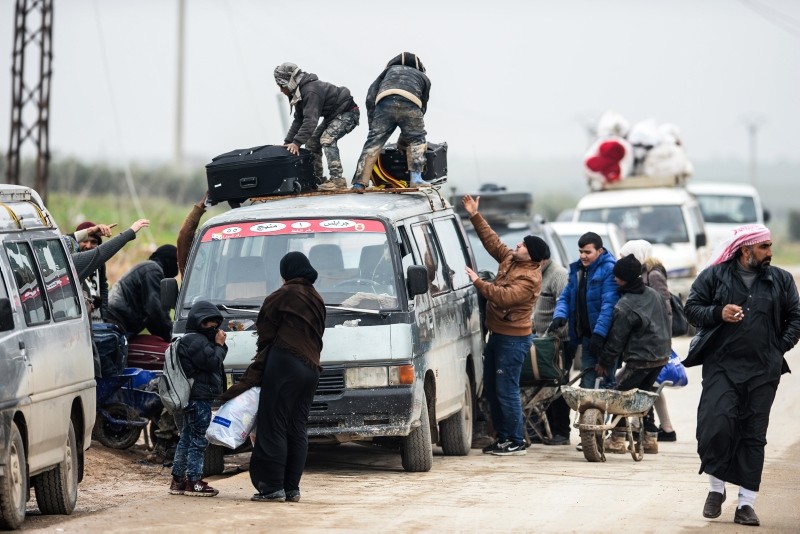 The PKK-affiliated People's Protection Units (YPG) increased its oppression of local people in territories under its control, limiting the movement of local people who want to leave northern Syria's Manbij ahead of a likely Turkish counterterrorism operation east of the Euphrates River.

Ten days ago, the terrorist organization forced men living in Manbij to take up arms against Turkey by recruiting at least one young man per household, said civilians, who escaped from the YPG-held area and took shelter in Turkish-backed Free Syrian Army (FSA)-held Jarabulus. Civilians added that people live in fear under the YPG, and if they had the opportunity, they would escape from the city.

Media outlets also reported on Wednesday that the terrorist organization is forcing local people to protest against Turkey's possible military operation east of the Euphrates by sending notices to a hospital in the region. According to the notice, the hospital administration, doctors, nurses and employees were asked to attend the protest held yesterday. The notice said if they do not attend the protest, they would face "the consequences."

The YPG has a lengthy record of human rights abuses, ranging from kidnappings of suspected persons, recruiting child soldiers, torture, ethnic cleansing and forced displacement in Syria. Due to the brutalities of the YPG, Turkey has opened its doors to 512,708 Syrian refugees fleeing from YPG-held areas, while another 300,000 Syrian refugees coming from the region took shelter in Iraq.

In 2018, a U.N. report on children in armed conflict found 224 cases of child recruitment by the YPG between January and December in 2017. The U.S. State Department reported in 2017 that the terrorist organization recruited and trained children as young as 12 years old despite having signed a pledge of commitment with an international organization in June 2014 to demobilize all fighters younger than 18 years old.

Various human rights organizations documented cases of forced displacement, demolition of homes and the seizure and destruction of property under the pretext of fighting Daesh. The terrorist organization even targeted some villages with the accusation of "supporting Daesh." The village of Husseiniya, for example, was completely razed to the ground in 2015, leaving just 14 of 225 houses standing.

The group also committed atrocities including severely punishing local people protesting the organization and enforcing an ideological school curriculum under its de facto administration in northern Syria. The October report by the U.N. Office for the Coordination of Humanitarian Affairs (OCHO) reported an increase in deliberate disruptions of education and health services in northern Syria's Raqqa and al-Hasakah provinces.

The YPG also killed hundreds of political dissidents and its own members whom they suspected had lost their faith in the organization. The YPG murdered at least 40 Kurdish politicians, activists and journalists who opposed the terrorist organization, between 2012 and 2014, but these numbers decreased after Western backing for the group expanded.