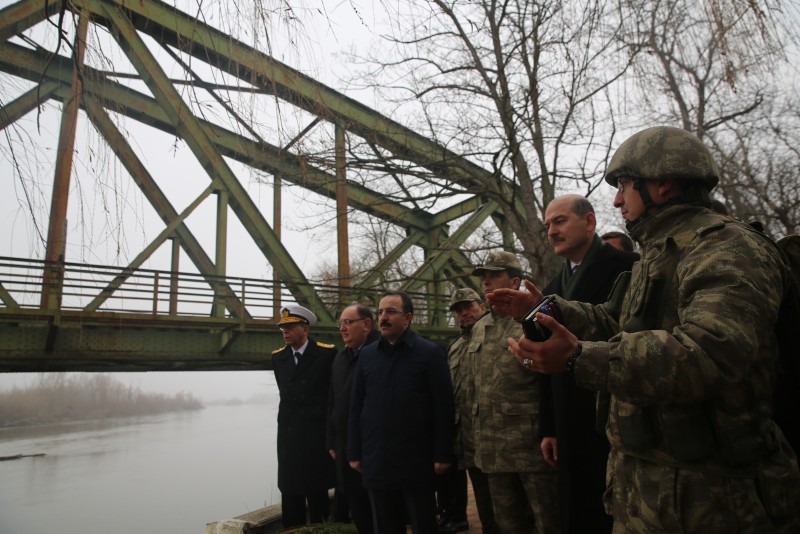 A soldier briefs Interior Minister Su00fcleyman Soylu (2R) next to the Maritsa River forming the border with Greece at a military facility in Edirne, northwestern Turkey, Dec. 22, 2018. (AA Photo)
by Daily Sabah with Reuters Dec 22, 2018 12:00 am

Turkey hosts more than 3.5 million Syrian refugees who have fled the conflict in their homeland. Some Turks view them as an economic burden and a threat to jobs, however, anti-migrant rhetoric and violence had been significantly lower when compared to developed countries in Europe.

"The number of Syrians that returned to their country after the Euphrates Shield and Olive Branch operations is 291,790," Soylu said at a coordination meeting against irregular migration in northwestern province of Edirne bordering Greece and Syria.

The Turkish military pushed into Syria northwest in two offensives, carving out a de facto buffer zone to protect its border towns and cities, which were targeted in cross-border attacks by both terrorist groups.

The first, "Euphrates Shield" in 2016, drove Daesh from territory along the border and prevented YPG from forming a continuous area stretching from Iraqi border to Afrin district located northwest of Aleppo. The second, "Olive Branch", wrestled the nearby Afrin region from the hands of YPG terrorists this spring.

Soylu also said that more than 251,794 illegal migrants had been caught in Turkey in 2018, without specifying their nationalities, adding that this showed a jump of 56 percent from the previous year.

He said stepped up efforts by Turkish police and security forces and the coastguard to clamp down on illegal migration had curbed the flow of migrants to countries in Western Europe.

"Especially our Coast Guard Command uses nearly three-fourth of its capacity in the fight against irregular migration," Soylu said.

Soylu noted that there are 4.5 million foreigners in Turkey, including 3.6 million people with refugee status, and the country is facing an increasing pressure of irregular migration from Pakistan and Afghanistan.

The coordination meeting was attended by governors of Edirne, Tekirdağ and Kırklareli provinces located in Turkish territories in Europe, in addition to police, gendarmerie and coast guard officials. During his visit, Soylu also visited troops stationed on the border with Greece.

The minister described migration as the most important international issue of the 21st century and especially EU countries are going through serious crises due to migration, citing the resignations of U.K. home secretary and Belgian prime minister over migration issues.

Soylu also described the "pushback" tactics employed by Greek border and coastguard units as "unacceptable," saying that he talked with his Greek counterpart five or six times in the past 1.5 months, also raising this issue.

As a part of reconstruction efforts after the eviction of Daesh, Turkey opened a 500-bed hospital in al-Bab in April, currently the third and largest medical institution in the area. The hospitals, which are run by the Turkish Health Ministry, are equipped with all the necessary equipment in case of an armed conflict.

Turkey's first hospital opened in Jarabulus in September 2016, after the town was liberated by Operation Euphrates Shield. Along with the two hospitals in al-Bab and Jarabulus, another one came into service in Afrin, which was liberated from the YPG on March 18 by Operation Olive Branch.

Besides health services, there has also been a rapid recovery in terms of infrastructure, security and social life in northern Syria in areas liberated by Turkish and Free Syrian Army (FSA) forces. An administration was established with the participation of local people in areas cleared of Daesh, including al-Rai, Jarablus, al-Bab and Azaz.

Moreover, local councils have also been established to administer the normalization process, regular security forces were formed and these local councils manage projects on education, infrastructure and the economy.

Turkey became one of the main launch points for more than a million migrants from the Middle East and Africa taking the sea route to European Union territory in 2015.

The influx of migrants was drastically curtailed by a 2016 accord between Ankara and the EU to close the route after hundreds died crossing to Greek islands.

President Recep Tayyip Erdoğan said on Friday that Turkey would postpone a planned military operation against PKK/YPG in northeast Syria as he "cautiously" welcomed Washington's decision to withdraw its troops in the area.