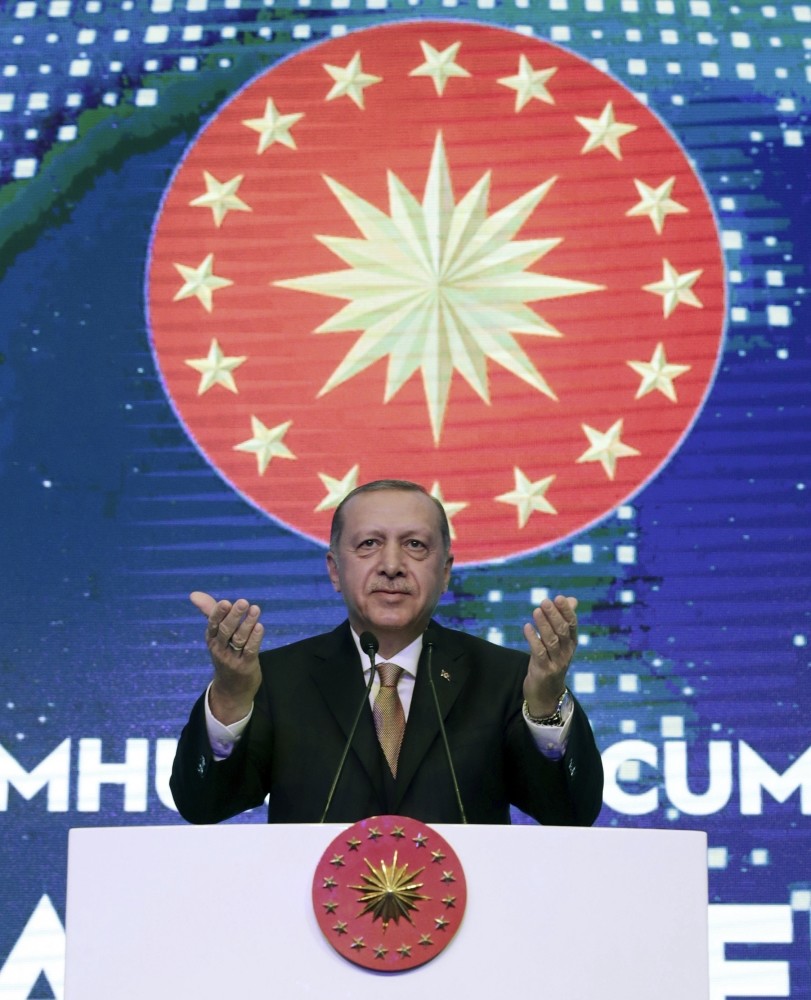 Ankara has decided to delay its third military operation in northern Syria amid diplomatic traffic with Washington and said it would wait for the U.S. to withdraw from the region

Turkey has decided to wait a little longer before launching operations east of the Euphrates until United States troops are completely withdrawn from the region, President Recep Tayyip Erdoğan announced on Friday.

Speaking at the Service Exporters Award Ceremony, Erdoğan said that following the diplomatic row between Ankara and Washington, Ankara has decided to halt operations for a while, until "seeing the concrete results of the U.S. plan to retreat from the region." He added that in the meantime, Turkish forces on the ground would work on their operation plans to completely eradicate Daesh terrorist elements from the region.

"Trump asked me whether or not we would clear the region of Daesh and when we said we would, the withdrawal started," the president said.

On Wednesday, Washington announced it would be withdrawing all of its troops from Syria, following a conversation between Erdoğan and his U.S. counterpart Donald Trump over an imminent Turkish cross-border operation to eliminate the PKK-affiliated People's Protection Units (YPG) from northern Syria. It has been reported that the U.S. still has about 2,000 troops in Syria. Almost all the territory east of the Euphrates river comprises about one-third of the territory of Syria, except for the Bashar Assad regime-controlled area near Deir ez-Zor and the area near the Iraqi border controlled by the Syrian Democratic Forces (SDF), a group dominated by the YPG.

During his speech, Erdoğan underlined that Turkey has waited too long for the Syrian crisis to be resolved; however, all efforts have failed so far.

"We have waited for a long time for the Syrian crisis to be resolved by the international community and aimed to contribute as much as possible. However, in this process, not only has the crisis not been solved, but on the contrary, it reached a point that poses threats to our borders and citizens," the president said, emphasizing that this is why Turkey had to take responsibility for bringing peace to Syria. He added that there is no other way for 3.6 million Syrian refugees to return to their homes and feel safe.

Since 2011, Turkey has received a constant flow of displaced Syrians fleeing the conflict, and their numbers have expanded from mere thousands to millions. Currently, there are more than 3.5 million Syrian refugees in Turkey, the highest number in the world. Over 475,000 of these Syrian refugees came from YPG-controlled areas of the war-torn country, while another 300,000 fled from the atrocities of the terrorist organization and took shelter in Iraq.

"Thanks to our close cooperation with Russia and our [previous] successful operations, west of the Euphrates reached partial stability," Erdoğan said.

Previously, Turkey conducted two offensives in northern Syria, Operation Olive Branch and Operation Euphrates Shield. The first was launched by Ankara to clear its borders of Daesh terrorists, while the second prevented the YPG's ultimate plan of establishing an autonomous region in northern Syria by connecting the northwestern Afrin canton to the Kobani and Jazeera cantons in the northeast.

"However, east of the Euphrates, despite all of our warnings, the terror corridor they are trying to establish brought us to a point that we have to take all possible risks into account," Erdoğan said.

Criticizing the years-long diplomatic process with the U.S. on Syria, Erdoğan said that since the era of U.S. President Barrack Obama, it has been mostly disappointments.

"Especially the problems we had during Obama's term were inherited by the [Donald] Trump administration. Although in face-to-face meetings and phone conversations we saw that we have a lot in common with Mr. Trump on Syria, the reflection of these commonalities in the field came too late and too hard," Erdoğan said. He underlined that due to the failed experiences of the past, although Turkey welcomes the U.S. decision to withdraw, the country also approaches it cautiously.

Turkey recognizes the PKK and the YPG as organically linked terrorist groups. The U.S., however, while listing the PKK as a terrorist group, has supported the YPG militarily under the pretext of fighting Daesh. The U.S., despite Ankara's warnings, previously supplied truckloads of military support to the YPG. Washington's cooperation with the YPG was initiated during the Obama administration, under the pretext of fighting Daesh. Ankara has objected to the decision since.

The Obama administration said cooperation would end after the defeat of Daesh and weapons given to the terrorist group would be retrieved. To end the incorrect policies of the Obama administration and turn a new page, Erdoğan discussed the issue several times with Trump, who promised last November that the U.S. would not provide arms to the YPG.

Accordingly, the two sides reached the Manbij agreement. Yet, the sluggish process and ongoing relations with the YPG showed that there was no change in U.S. policy over the YPG.

Foreign Minister Mevlüt Çavuşoğlu also said Turkey is content with the U.S. decision to withdraw soldiers from Syria, speaking at a press conference with his Maltese counterpart Carmelo Abela on Friday.

Çavuşoğlu called the decision an important step for a political resolution in Syria and emphasized that it's necessary to focus on a political solution to solve the tragedy in the country.

"With regard to the withdrawal decision by the U.S. from Syria, we welcome the decision," Çavuşoğlu said.

"We believe that Daesh is defeated but still we should be very vigilant because Daesh and other radical groups are still on the ground," he said.

Çavuşoğlu also said he and other Turkish officials have already been in touch with U.S. officials "at different levels" on the issue.

The president also touched upon the post-operation period, saying that when the terrorist elements are eliminated, the reconstruction period can finally start. He said although the issue of reconstructing Syria has been discussed with several countries, the discussions have all failed due to promises that havent been kept.

"We are expecting the international community, which failed to prevent the destruction of Syria, to at least contribute to this [reconstruction] process," Erdoğan said, reminding that in areas under the control of the Turkish army, reconstruction activities have already started.

"We can spread our experiences gained in these regions to all of Syria, as long as the necessary support is provided to our country," the president underscored.

Following the operations, Turkey has also been involved in efforts to rebuild infrastructure in towns as well as health and educational institutions. Schools are being renovated and a hospital is being built. Turkey also helps local people build olive oil facilities in towns where agriculture is the main source of income for residents.

Thanks to the success of both operations and post-operation developments in liberated areas, the number of refugees returning to their hometowns has increased in recent months. More than 281,000 Syrian refugees have returned home since 2016.

"We don't have our eyes on anyone's land, right, laws or food. On the contrary, we are trying to ensure not only our future but also that of all of our brothers, friends and allies," Erdoğan said. Indicating that all developments in Europe, the Mediterranean, Syria, Iraq, the Caucasus and the Black Sea regions affect Turkey directly, the president said that this is the main reason why Ankara is following developments in the region closely and even becoming involved in them.