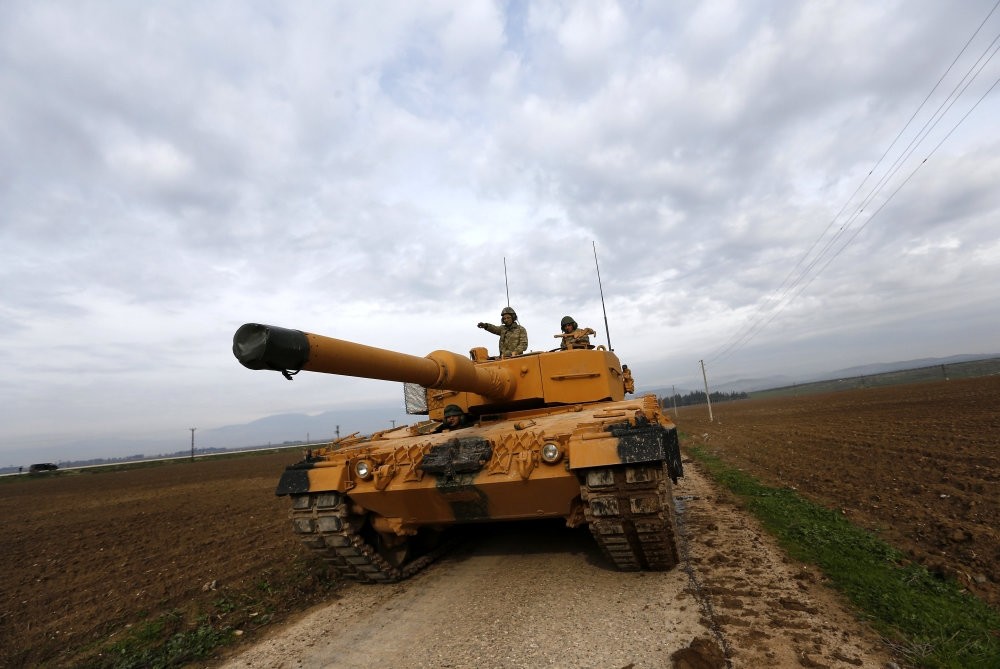 Turkish soldiers on their tanks near the Turkish-Syrian border in the Reyhanli district of southern Hatay province on Jan. 21 as part of Operation Olive Branch, which was launched on Jan. 20 and ended on March 18.
by Özgenur Sevinç
Dec 24, 2018 12:00 am

Turkey is determined to continue its fight against Daesh and the YPG terror groups along its borders with Syria. With the U.S. withdrawal from Syria, a period of détente also expected in Ankara-Washington ties, as long as the U.S. does not continue its partnership with the YPG

The recent decision by U.S. President Donald Trump to withdraw from Syria has left many pondering the ramifications on the ground, as the move might saddle Turkey with leading the fight against Daesh. Ankara's objective is to fend off terror threats while opposing its allies' partnerships with non-state actors.

"The U.S. has left the door open for Turkey's repeated calls for joint cooperation against Daesh," Murat Yeşiltaş, the security studies director at the Foundation for Political, Economic and Social Research (SETA), told Daily Sabah, as he stressed that Turkey's main goal is to eliminate threats in northern Syria posed by terrorist groups, including the PKK's Syrian affiliate, the People's Protection Units (YPG).

The long-expected operation east of the Euphrates, which the YPG considers as under its de facto control, was put on hold after President Recep Tayyip Erdoğan announced that Ankara would wait until U.S. troops leave the region. In the process ahead, Turkey is expected to take steps to eliminate YPG terror threats along its borders, draft a strategy to defeat remaining Daesh members while watching for any attempts at a fait accompli by the regime and the YPG, Yeşiltaş added.

"However, Turkey's priority must be the YPG threat along its borders. In the fight against Daesh, Turkey should take steps with the international coalition, as a ground operation toward southern Syria to target Daesh would create risks for Turkey," Yeşiltaş said.

The close U.S. partnership with the YPG since the Obama administration has deeply harmed relations with Ankara. As a NATO ally, Turkey values its ties with the U.S., considering it a strategic partner. The sticking point in ties was the U.S. misstep in Syria and disregarding Turkey's concerns over partnering with the YPG, despite Ankara's repeated warnings.

Turkey's main objection to the U.S. Syria policy was Washington's military and political support to the YPG. Despite warnings to Washington that it is not rational to fight a terror group using another, the U.S. opted to continue with the YPG, providing heavy arms to a terrorist group that poses direct threats to Turkey, as the YPG is organically linked to the PKK. In addition to Turkey, the PKK is listed as a terrorist group by the U.S. and the European Union.

Previously, Ankara said that local forces could be used to fight Daesh instead of the YPG, which has separatist plans in Syria. With support from the U.S., the YPG gained large swathes of Syrian land.

Since the fight against Daesh has neared its end, Ankara has raised questions about ongoing U.S. support for the YPG. As the U.S. has failed to answer, Trump decided to pull out, which led to the resignations of high-level officials in response to the new policy.

"On Syria, we were originally going to be there for three months, and that was seven years ago; we never left," Trump tweeted on Dec. 22. Highlighting that Daesh is largely defeated, Trump tweeted on Saturday: "other local countries, including Turkey, should be able to easily take care of whatever remains. We're coming home!"

Since the bipolar set up between Western and Eastern blocs, Turkey and the U.S. are traditionally known to be strategic allies in the Middle East. Washington and Ankara are also NATO allies and the U.S. has an air base in İncirlik in southern Adana province. The government has voiced that it is open to further cooperation against terrorism as well as other regional issues. However, U.S. indifference to Turkey's security concerns, including over the YPG and the presence of Fetullah Gülen, the head of Gülenist Terror Group (FETÖ) in the U.S. has cut relations to a historic low in recent years.

"If the U.S. withdrew its support from the YPG, it would strengthen Turkey's hand as it would easily target terror groups," Oytun Orhan, a Syria expert, told Daily Sabah.

"Yet, there would be risks as well since various actors on the ground would be eager to fill the power vacuum left by the U.S.," Orhan said and added, "The YPG, which felt betrayed by Trump's decision would seek new alliances to prevent Turkey's operation against them."

Underlining that the YPG would seek an alliance with the Syrian regime, Orhan said that if they agree to work together and the regime allows the YPG east of Euphrates, this would pose a risk to Turkey.

He added that to avoid such scenarios, Turkey must immediately fill the vacuum when the U.S. withdraws.

As the presence of U.S. troops on the ground was creating risks of encountering a possible operation by Turkey; with the withdrawal of the U.S. it might be easier for Ankara to target terrorist threats east of the Euphrates.

Referring to Trump's recent tweet saying that local countries can handle the remains of Daesh, Orhan said that the U.S. and Turkey might be involved in further coordination to fill the vacuum.

"Daesh has been in the southern parts of Syria, away from the Turkish border. An operation by Turkey in this area has risks and extending throughout the Syria would definitely bring Russia, Iran and Turkey face to face," Orhan added.