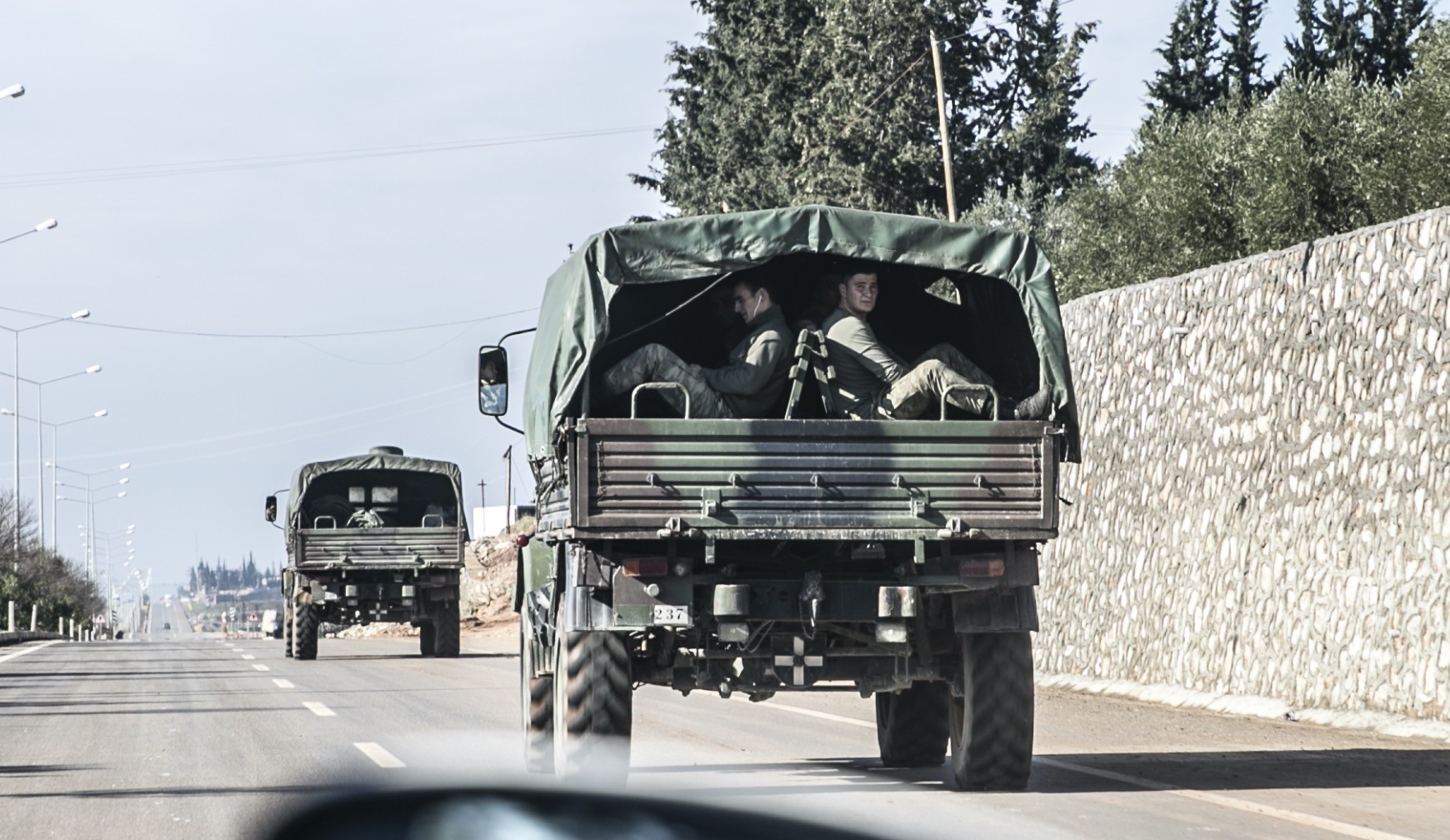 Military deployment in northern Syriau2019s Manbij was scaled up yesterday as part of preparations for the likely operation in the city and to the area east of the Euphrates river to eliminate PKK affiliates and Daesh terrorists in the region.
by daily sabah
Dec 25, 2018 12:00 am

Ankara is determined to eradicate Daesh from its borders more than ever, although the terrorist group has already been facing extinction for quite some time now thanks to previous offensives by the Turkish military

Ankara has been taking resolute steps to eradicate terrorist elements in Syria following U.S. President Donald Trump's announcement that American troops will withdraw from the war-torn country. "[President Recep Tayyip Erdoğan] has very strongly informed me that he will eradicate whatever is left of [Daesh] in Syria and he is a man who can do it plus, Turkey is right 'next door.' Our troops are coming home," Trump said on Sunday on his official Twitter account, hours after his telephone conversation with Erdoğan.

The Turkish presidency also issued a statement on the issue, indicating that Erdoğan conveyed his satisfaction over the withdrawal and that his country is ready to provide any kind of support to its NATO ally. "The two leaders agreed to ensure coordination between their countries' military, diplomatic and other officials to avoid a power vacuum which could result following any abuse of the withdrawal and transition phase in Syria," the statement added. Last Wednesday, Trump announced that the U.S. would withdraw its troops from Syria, acting on his presidential election campaign promise to end the military presence in Syria, after a phone call with Erdoğan on Oct. 14 over an imminent Turkish cross-border operation to eliminate the PKK-affiliated People's Protection Units (YPG) from northern Syria.

Trump said the only reason U.S. troops were in Syria was to defeat Daesh and now that this mission is accomplished, there is no reason for them to stay in the country. This leaves Turkey with the task of leading the fight against Daesh.

Subsequently, White House spokesperson Sarah Sanders announced that all State Department personnel in Syria would be evacuated in 24 hours, and the troops were expected to be withdrawn within 60 to 100 days. She also underscored that that troop withdrawal marked the start of the "next phase" in the struggle with Daesh and suggested troops may return if necessary.

Trump's sudden decision caught many officials and other countries off guard, prompting the resignation of Brett McGurk, the U.S. special envoy to the anti-Daesh coalition, and Jim Mattis, U.S. secretary of defense. Senators claimed that Syria would be a grave mistake and may lead to the revival of Daesh, while numerous media outlets regarded the decision as a "betrayal" to the long supported PKK-affiliate YPG, which Turkey views as an existential threat.

Despite all the reactions, the executive order to withdraw the U.S. troops from Syria was signed, the United States military declared Sunday. However, no details were given on how and when the pullout of some 2,500 troops will take place. Trump also announced on Sunday that plans for the troop withdrawal will now be overseen by Deputy Secretary of Defense Patrick Shanahan, who is expected to replace Mattis starting Jan. 1.

U.S. support of the YPG in the aftermath of the withdrawal, on the other hand, remains an issue of concern as chief Pentagon spokesperson Dana W. White pointed out that Washington will continue working with its partners and allies even after the withdrawal. Washington has not made any further statements on the matter yet amid internal pressures, raising more questions.

Accordingly, Anadolu Agency (AA) reported yesterday that Pentagon spokesman Cmdr. Sean Robertson evaded answering questions regarding whether weapons the YPG was provided by Washington will be retrieved. Instead, he said, "We've always been clear that the weapons provided to [the YPG] will be limited, task-specific and comply with the gradual aim of defeating Daesh."

Previously, the Barack Obama administration had said cooperation would end after the defeat of Daesh and weapons given to the terrorist group would be retrieved. To end the incorrect policies of the Obama administration and turn a new page, Erdoğan discussed the issue several times with Trump, who promised last November that the U.S. would not provide arms to the YPG.

The close U.S. partnership with the YPG since Obama's administration has always been a sticking point in Washington-Ankara relations. Turkey sees the YPG as an extension of the PKK that claimed the lives of more than 40,000 people its 30-year terror campaign against Turkey. The U.S., however, while listing the PKK as a terrorist group, opted to continue its steadfast militarily support for the terrorist organization under the pretext of fighting Daesh despite warnings that it is not rational to fight a terror group using another.

In the wake of the YPG threat near its borders, Erdoğan and many other Turkish officials vowed to launch an operation into the area east of the Euphrates under the YPG's de facto control "very soon." Following Trump's announcement of the withdrawal, the long-awaited operation was put on hold until U.S. troops leave the region. However, Turkey has been mobilizing its troops to be ready for every possibility.

The Turkish Armed Forces (TSK) has been ramping up its military dispatch to Syria since the weekend. Media outlets reported yesterday that a 100-vehicled convoy of Turkish troops, including armored vehicles, tanks and construction equipment, crossed the Turkish-Syrian border overnight. The troops are expected to be deployed near northern Syria's YPG-held Manbij and Tal Abyad.

"There will not be any slowing down in fight against Daesh," Presidential Spokesperson İbrahim Kalın also said yesterday following Cabinet meeting in Ankara.

"A U.S. military committee will come to Turkey this week," Kalın added.

Turkey's coordination with the U.S. is not limited to military coordination but will also include intelligence and diplomatic representatives, he further indicated.

Kalın also said that Erdoğan invited Trump to Turkey and upon this invitation the U.S. president is expected to visit the country in 2019.

Meanwhile, local sources told AA yesterday that the YPG seized control of Hajin city, a major stronghold of Daesh. Despite claims of the YPG and some U.S. military officials in Syria suggesting that Daesh has not been defeated and has a grip in the war-torn country, the city had been regarded as a last haven for Daesh terrorists.

The terrorist group started building its de facto control in Iraq and later in Syria in 2014 through a campaign of violence, invasion and extreme brutality against residents. Following a period of expansion from 2014 to 2015, Daesh went into a gradual decline, with the U.S.-led coalition bombings. Daesh still maintains control of five towns in the countryside of the eastern Deir el-Zour province and Homs in central Syria.