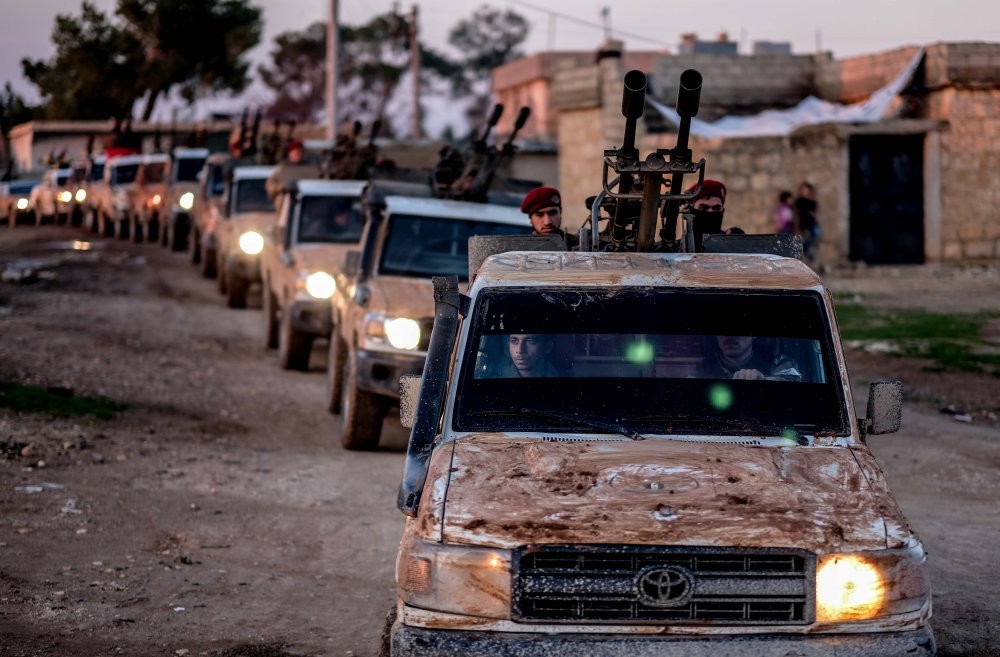 An FSA military convoy heads to Manbij as a part of the Turkish military's dispatch to the region for an operation east of the Euphrates, Dec.25.
by Nur Özkan Erbay Dec 26, 2018 12:00 am

As Turkey prepares for a third offensive in northern Syria, civilians in the area show their support and express frustration with the presence of terrorist elements in the region

Locals in northern Syria, including Arab, Turkmen and Kurdish tribes living in the region, have expressed their support for the expected Turkish military operation east of the Euphrates River to clear the PKK-affiliated People's Protection Units (YPG) and eastern Syria to sweep out remnants of Daesh.

Speaking to Daily Sabah, a senior figure in the Turkish-backed Free Syrian Army (FSA) who wished to remain anonymous, said residents in the region, including not only the Turkmen and Arab tribes which constitute the majority in the YPG-controlled areas, but also the Kurdish tribes that oppose the YPG, are eager to back Ankara's offensive in the region, which provides an advantage for the Turkish military. President Recep Tayyip Erdoğan said at the beginning of the month that Turkey will conduct an anti-terrorist operation in Manbij if the U.S. fails to clear the YPG from the northern Syrian region. He also reiterated Turkey's determination to bring peace to the areas east of the Euphrates River; however, after the U.S.' decision to withdraw its troops from Syria last week, Turkey decided to delay its operation. Still, Erdoğan reiterated on Monday Turkey's determination to protect the people of Syria from the oppression of terrorists, saying that the country considers the problems faced by the Arabs and Kurds as its own.

"We will not abandon Syria's Kurds to the PKK/YPG and the Arabs to Daesh," Erdoğan told reporters in Ankara.

Murat Aslan, an academic from Hasan Kalyoncu University, told Daily Sabah that Syrian locals' support of the likely operation is an important factor that increases its chances of success. "The PKK has never had footing among the people. The U.S. finally understood that it could not cooperate with such an organization in fight against terrorism and made a right decision," he said.

Washington announced on Wednesday that it would be withdrawing all of its troops from Syria, following a conversation between Erdoğan and his U.S. counterpart Donald Trump over an imminent Turkish cross-border operation to eliminate the YPG from northern Syria.

Speaking to reporters yesterday, Erdoğan said the U.S. had done its part by deciding to withdraw its troops. "We are continuing our cooperation with U.S. President Donald Trump on Syria," he added.

Ankara also emphasized that the U.S. withdrawal should not create a power vacuum that would be filled by the YPG. Foreign Minister Mevlüt Çavuşoğlu said yesterday that Turkey is determined to cross to the east of the Euphrates river in northern Syria as soon as possible, noting that the developments about the U.S.' withdrawal should not serve the YPG.

Ankara decided to delay its third military operation in northern Syria amid diplomatic traffic with Washington and said it would wait for the U.S. to withdraw from the region.

Çavuşoğlu added that Turkey and the U.S. agreed to complete a Manbij road map by the time the latter fully completes its withdrawal from Syria.

"We can clean Daesh terrorists out regardless of where they are located in Syria," the foreign minister said, adding that Turkey can cooperate with everyone except terrorists to fight Daesh, but the country also has the power to fight them by itself.

Speaking about the offensive, Defense Minister Hulusi Akar said yesterday preparations for a counterterrorism operation are proceeding as planned and talks will be held with U.S. officials in the coming days on the road map for Manbij.

Turkey recognizes the PKK and the YPG as organically linked terrorist groups. The U.S., however, while listing the PKK as a terrorist group, has supported the Syrian Democratic Forces (SDF) militarily, which is predominantly-led by the YPG, under the pretext of fighting Daesh.

Regarding the preparations of the military operation, the source also indicated that about 15,000 FSA special forces are expected to participate the operation, adding that convenient land conditions and the support of the locals provide a significant advantage for Turkish army and the FSA against YPG terrorists.

The latest process of the restructuring of the FSA was the launch of the Syrian National Army, founded in December 2017, consisting of approximately 30 subgroups linked to the FSA. The army, which is estimated to have 15,000 soldiers, aims to protect the area that was liberated in Operation Euphrates Shield and Operation Olive Branch, as well as to defend civilians against the Syrian regime and groups like Daesh and the YPG.

Aslan said he is not expecting a linear defense from the PKK as it is not possible for the terrorist group to organize such strategy in the 500-kilometer area, adding even land and snowy climate will ease the offensive for the Turkish army.

"The M-4 highway, which lies in Ayn al-Arab and Qamishli, holds significance for logistics. If the Turkish army will cut this line, the PKK will be locked in pocket regions. The terrorist organization will probably try minefields [for protection]," he said.

Many groups consisting of fighters from different ethnicities have declared their intention to participate in the Turkish offensive so far.

The Kurdish Falcons Brigade, an opposition group consisting of 500 Syrian Kurds, is expected to join the likely Turkish operation under the Hamza division of the FSA.

"We fought against terrorists in Afrin, and we will fight them east of the Euphrates. The YPG is not the representative of the Kurds. They committed the greatest treason against Kurds. We will fight until all the terrorists are cleared from the area," said Kurdish Falcons Brigade leader Hasan Abdullah Kulli.

The land east of the Euphrates River comprises about one-third of the territory of Syria, except for the Bashar Assad regime-controlled area near Deir el-Zour and the area near the Iraqi border controlled by the YPG.

US taking inventory in YPG armories

The source told Daily Sabah that personnel from the U.S. Army has started to take inventory in YPG weapons depots, adding that it is not clear yet if the U.S. intends to completely retrieve them, as promised to Ankara before.

Previously, the Barack Obama administration had said cooperation with the YPG would end after the defeat of Daesh, and the weapons given to the terrorist group would be retrieved. To end the incorrect policies of the Obama administration and turn a new page, Erdoğan discussed the issue several times with Trump, who promised last November that the U.S. would not provide arms to the YPG. Accordingly, Anadolu Agency (AA) reported on Sunday that Pentagon spokesman Cmdr. Sean Robertson evaded answering questions regarding whether weapons the YPG was provided by Washington will be retrieved. Instead, he said, "We've always been clear that the weapons provided to [the YPG] will be limited, task-specific and comply with the gradual aim of defeating Daesh."

The source added that the U.S. probably abandoned its plans to deploy Iraqi peshmerga to YPG-controlled areas, as only a group consisted of 30-40 peshmerga has entered the area so far.

Speaking on the issue last week, Ibrahim Bro, who is in charge of foreign affairs in the Kurdish National Council in Syria (ENKS) told AA that Syrian peshmerga and the YPG had a secret meeting just a few days on the return of the peshmerga to YPG-controlled areas, but no results were achieved.

It was previously reported that thousands of Syrian peshmerga troops are likely to be moved from the Kurdistan Regional Government (KRG) in Iraq to designated areas by the U.S. in the near future following the initial deployment of 400 peshmerga forces. The Roj peshmerga mainly consists of Syrian Kurds who left their hometowns and resided in the areas run by the KRG after the Syrian civil war began. These peshmerga forces, with an estimated 8,000 militants, have been trained by U.S. forces in the cities of Irbil and Dohuk in Iraq since 2012 to be used in anti-Daesh forces in Mosul and along the Iraq-Syria border. However, YPG forces had been preventing the Roj peshmergas from entering northern Syria due to their close connections with the KDP.