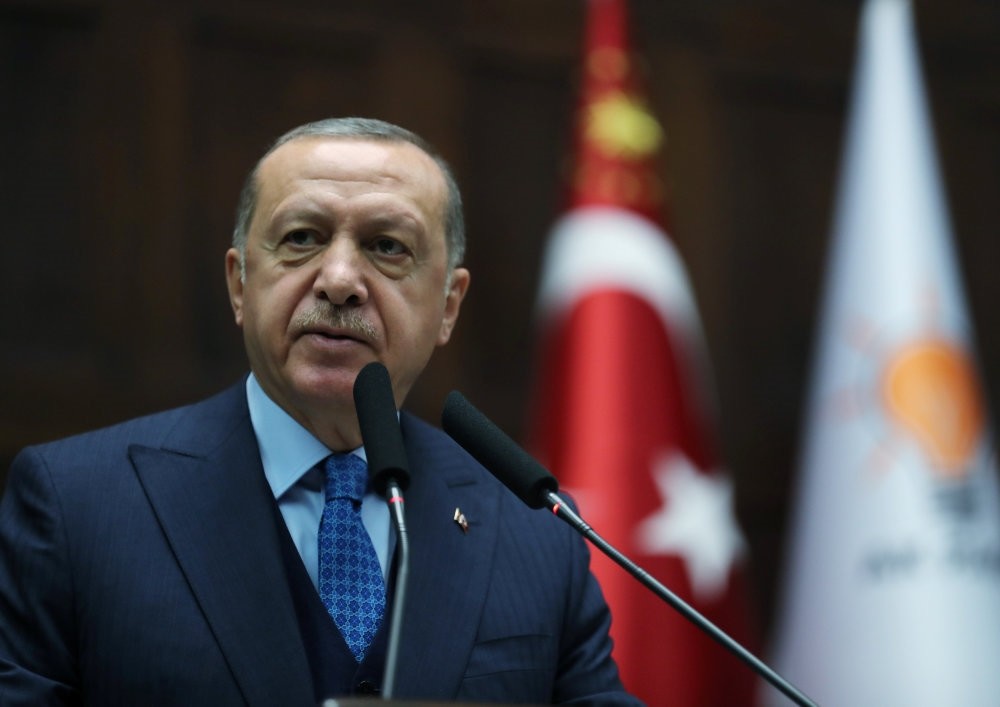 President Recep Tayyip Erdou011fan, the chairman of the AK Party, gestures to his supporters as he speaks during his party's parliamentary group meeting at the Grand National Assembly of Turkey in Ankara, Dec. 25.
by daily sabah Dec 26, 2018 12:00 am

The president slammed the main opposition CHP yesterday for the party's cooperation, especially in regard to the upcoming local elections, with groups that are known for their close ties with terrorists

The Republican People's Party (CHP) began to resemble the "extensions of the separatist terrorist organization" by forming an electoral alliance with them, President Recep Tayyip Erdoğan said Wednesday, referring to the pro-PKK Peoples' Democratic Party (HDP) recent announcement that they will possibly back the CHP's Istanbul mayoral candidate in the upcoming elections.

He also said that it comes as no surprise that the CHP is taking sides with terrorists.

"[Kılıçdaroğlu] reveals his side by not mentioning Yasin Börü and criticizing judicial decisions [on Demirtaş]," he said.

Demirtaş was sentenced to four years and eight months in prison in September for carrying out terrorist propaganda during a 2013 speech. However, the biggest charges Demirtaş is facing are related to the Kobani riots on Oct. 6-7, 2014, and the role of the HDP-linked officials and municipalities in the PKK terrorist group's unilateral move to end the reconciliation period and launch an unprecedented barricade and trench warfare in cities and towns in Turkey's southeast.

Following Demirtaş's call to take to the streets, more than 50 people were killed, among the victims was Yasin Börü, a 17-year-old who was thrown from a third-floor window, stabbed, burned and then run over by a car.

Despite CHP's denial of possible cooperation with the HDP for the local elections in March 2019, media outlets reported yesterday that the HDP will decide whether to nominate candidates in the provinces and districts of Turkey's largest cities - Istanbul, Ankara, and İzmir - or to back the CHP's candidates.

"For a long time, [Ekrem] İmamoğlu and [Mansur] Yavaş's names were mentioned but there were hesitations, and different names have also come to the fore. When the names became clear, we decided to do some research in Istanbul," a senior executive of the party told the BBC yesterday, adding that the HDP will decide whether or not to nominate a candidate or support İmamoğlu and "listen to the demands of the local people."

The mayor of Istanbul's Beylikdüzü district, Ekrem İmamoğlu, was announced as the candidate of the CHP for Istanbul last week. İmamoğlu was born in Trabzon in 1970 and graduated from Istanbul University with a degree in business. He became mayor of Beylikdüzü in the local elections in March 2014, gaining 50.83 percent of the votes and winning the district from the ruling Justice and Development Party (ANAP).

İmamoğlu's candidacy had drawn criticism from some party members, who have been claiming that İmamoğlu is not a popular figure among the voter base of Istanbul. However, proponents of İmamoğlu say that he has proven himself in a district municipality and hails from a family with roots from the Black Sea region, where most of Istanbul's 15 million inhabitants hail from.

Stressing that they do not necessarily need to nominate candidates in three metropolitan municipalities, the senior executive said that the decision will be given after negotiations conducted with party organizations and the voter bases are accessed.

The HDP has come under fire for close links to the PKK, which is listed as a terrorist organization by Turkey, the U.S. and the EU. Members of the party have so far declined to call the PKK a terrorist group and have attended PKK militants' funerals, two of whom were suicide bombers that killed dozens of civilians in multiple bombings in Ankara.

Committing crimes for the PKK terrorist group in November 2016, 13 HDP lawmakers were arrested, and 10 of them, including HDP Co-chairs Demirtaş and Figen Yüksekdağ, remain under arrest awaiting trial on terror-related charges.