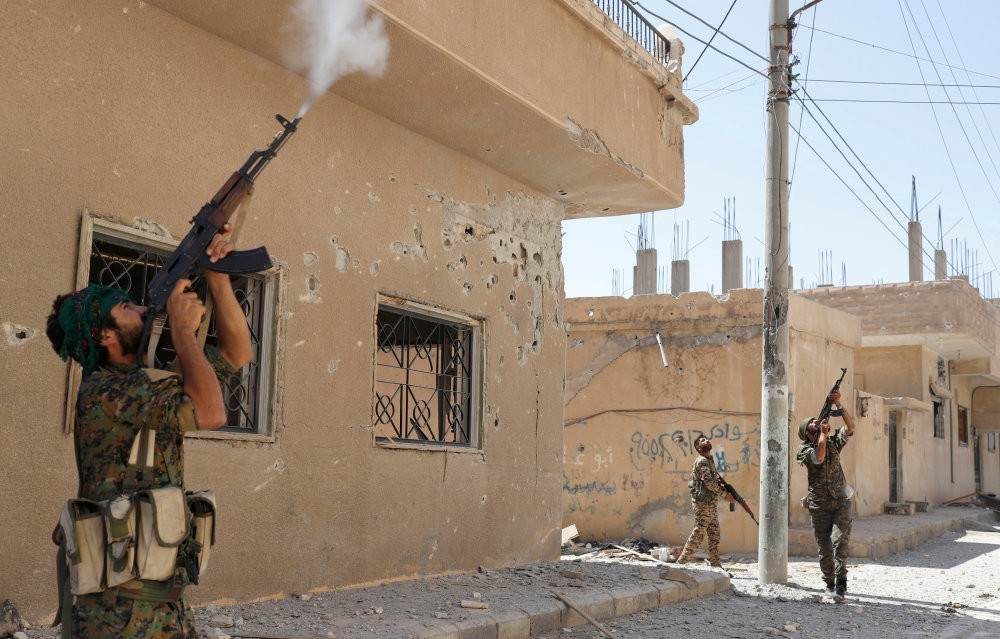 The YPG has increased pressure on Kurdish politicians who oppose them in Syria, proving that the terrorist organization does not represent the Syrian Kurds as it likes to claim

A number of Syrian politicians and representatives of Kurdish origin have raised concerns over atrocities committed by the PKK-affiliated People's Protection Units (YPG).

They said the YPG oppresses civilians and have prosecuted dissident Kurdish politicians who refuse to comply with its policies in northern Syria. They rebuked the common rhetoric of equating the terrorist organization with Syrian Kurds.

"YPG forces have been confiscating civilian homes in the regions under its control. They shut down the offices and extensions of other Kurdish political parties that opposed these policies," Abdullah Kedo, a Political Office member of the Yekiti Party, an extension of the Syrian Kurdish National Council (ENKS), told the Hürriyet newspaper yesterday.

He said that they have always faced oppressive policies at the hand of the terrorist organization. He added that the YPG has confiscated the house of Ibrahim Bro, who is in charge of the ENKS's foreign affairs, and raided the home of another ENKS representative, Fuad Aliko.

Bro was previously kidnapped by the YPG, in August, 2016, near the Syrian border with Turkey and was forced to leave the country after terrorist threatened him they would cut him to pieces if he returned.

Commenting on the YPG's oppressive policies, Kamiran Hajo, another ENKS official, said that the YPG have long oppressed ENKS members "imprisoning our colleagues, shutting down offices and banning our political activities." He added that several Kurdish dissidents are still in prisons due to their anti-YPG remarks.

He stressed that divergences between the ENKS and YPG appeared during the initial phases of Syrian civil war. "The biggest difference between us and them is we stand by the Syrian people and opposition while they chose to take side with the Assad regime... ENKS believes that it represents the Kurdish people and fight for their constitutional rights in Syria," he said.

The ENKS is a coalition of 10 Syrian Kurdish parties and known to oppose the YPG after the group became more dominant in northern Syria. ENKS is also a part of the High Negotiations Committee (HNC), a representative body of the Syrian opposition in Geneva talks since 2015.

ENKS has critical of YPG's oppression of rival political voices and actions like burning down its offices, arresting or kidnapping its members. It has also claimed that the YPG is working with the Bashar Assad regime.

The YPG has been kidnapping Kurdish politicians and important figures, who criticized them for a number of reasons. In addition, they collect ransom from local businesses. The YPG killed hundreds of political dissidents and its own members who they suspected to have lost belief in the organization.

The terrorist group also murdered at least 40 Kurdish opposition politicians, activists and journalists between 2012 and 2014 but the killings decreased after Western backing for the group increased.

A number of human rights organizations have documented the terrorist organization's violations of human rights with approximately 812,708 Syrians fleeing from YPG-held areas to Turkey and Iraq. In relation to the issue, Kedo highlighted that YPG is forcing young people to take up arms and fight in conflicts by sending them to Raqqa, Deir el-Zour and other places outside of the organization control.

In 2018, a U.N. report on children in armed conflict found 224 cases of child recruitment by the YPG between January and December in 2017. The U.S. State Department reported in 2017 that the terrorist organization recruited and trained children as young as 12 years old despite having signed a pledge of commitment with an international organization in June 2014 to demobilize all fighters younger than 18.