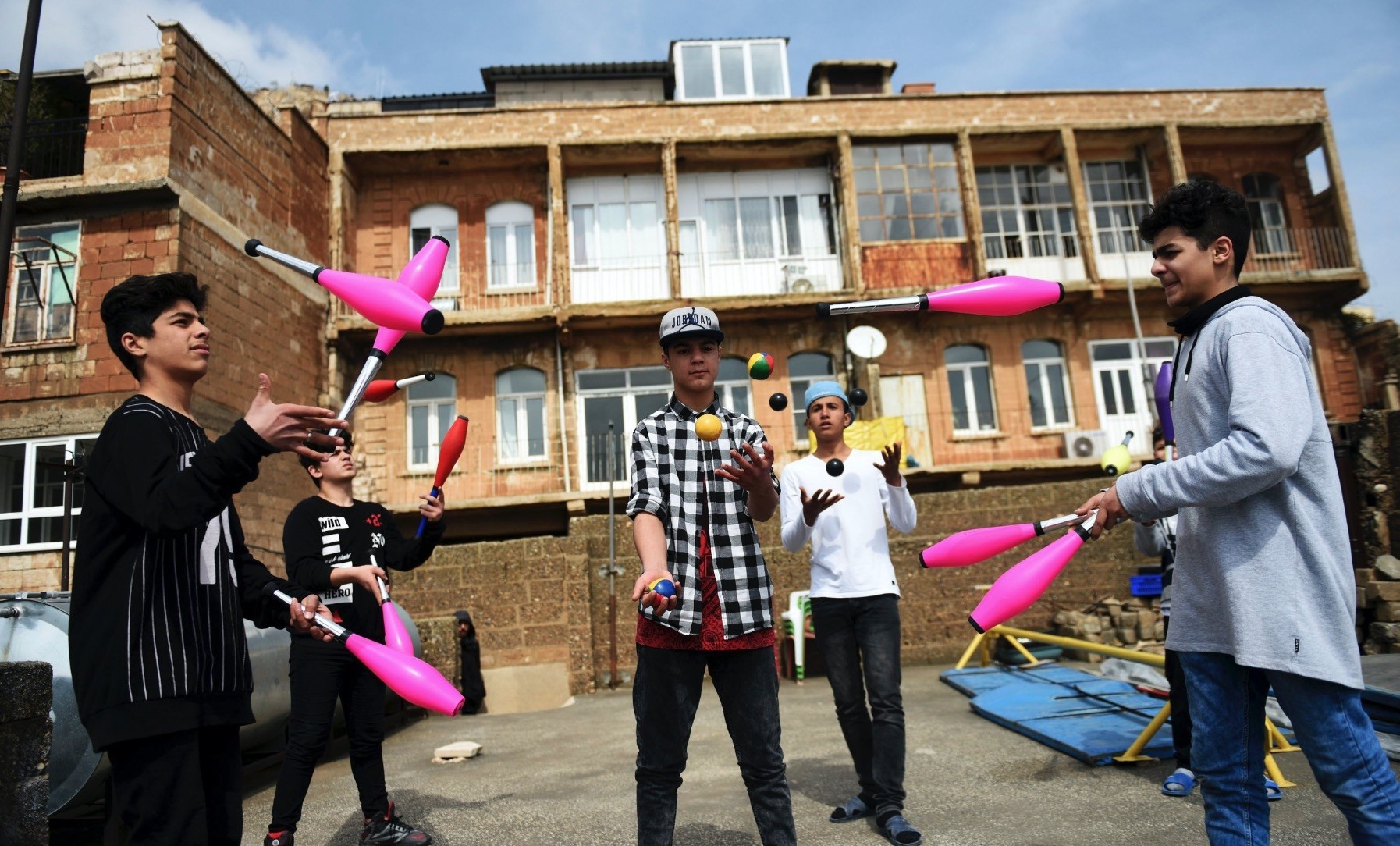 A Turkish military operation has been long awaited by Syrians from every ethnic background. From Kurds to Turkmens and Arabs to Assyrians, everyone wishes to have their homes cleared of terrorist elements

Two months have passed since President Recep Tayyip Erdoğan's announcement of a new offensive to northern Syria, this time east of the Euphrates. Today, Syrians from different ethnic backgrounds – including Kurds, Arabs and Turkmens – are clinging to the hope that the Turkish military operation has given them so that they can return their homes. Inspired from the lyrics of a Turkish classical song, Erdoğan said, "We might come suddenly in one night," last week when reporters asked him about the exact timing of the operation that aims to eliminate the PKK-affiliated People's Protection Units (YPG) terrorists as well as Daesh remnants. Turkey became a second home for many Syrians after the brutal civil war that ravaged their country. They have had to deal with anti-migrant rhetoric in most of the other places they fled to, especially European countries. Turkey has been hosting over 3 million Syrian refugees since the war erupted in 2011. So far, nearly 300,000 Syrians have returned to their homeland after Turkey's two cross-border operations in northern Syria, according to the Turkish Interior Ministry.

There are some facts and numbers which portray the YPG's systematical plan to change the demographics of the region in order to legitimize its existence east of the Euphrates River. Due to the brutality of the YPG, some 512,708 Syrians fled to Turkey, while another 300,000 Syrians took shelter in Iraq after fleeing from areas controlled by the terrorist organization. According to a report published in October by the Interior Ministry's migration management department, almost 20 percent of the 3.5 million Syrian refugees that Turkey has been hosting came from YPG-held territories including; 162,973 people from Manbij and Ayn Al-Arab, 141,903 from Raqqa and 207,832 others from the rest of land controlled by the terrorist group.

Abdurrahman Mustafa, the head of the Syrian National Coalition (SNC), which is an umbrella organization of the moderate Syrian opposition, confirmed during an interview that there are around half a million Syrians in Turkey who reside in the border cities, Şanlıurfa and Gaziantep.

They were forced to leave their hometowns in northern Syria, which are occupied by the YPG now.

"Among them there are Kurds, Turkmens, Arabs and Assyrians. They were forced to leave their homes by the YPG, under pretext of a Daesh threat. Now the only thing this people want is to return to their homes which are forcibly withheld by the YPG," he said.

Reminding about the YPG's human right violations, Mustafa also emphasized that the group has been carrying out gradual demographic change in cities including Manbij and Raqqa - places where Kurds were not the majority. This forced changed has been going on since 2014, the year when the YPG, the PKK's Syrian offshoot, started to receive U.S. backing.

A number of U.N. reports have proved the concerns of local people. While the YPG has some plans aiming to undermine the territorial integrity of Syria, it has also been preventing the access of civilians to their basic rights.

The latest report by the U.N. Office for the Coordination of Humanitarian Affairs (OCHO) reported an increase in deliberate disruptions of education and health services in northern Syria's Raqqa and Hasakah provinces by the YPG. The information provided in the report shows that the YPG disrupts education and attempts to indoctrinate school children by imposing its own curriculum.

For example, in Hasakah, more than 380 schools are affected by the restrictions, preventing almost 60,000 students from accessing their schools on a daily basis. Similarly, in Qamishli, the attendance rate has dropped by 45 percent.

So the legitimate question is what did those children do? In 2018, a U.N. report on children in armed conflict found 224 cases of child recruitment by the YPG between January and December in 2017. The U.S. State Department reported in 2017 that the terrorist organization recruited and trained children as young as 12 years old despite having signed a pledge of commitment with an international organization in June 2014 to demobilize all fighters younger than 18 years old.

Like other areas east of the Euphrates, there is information that the YPG aims to change the demographic structure in Tal Abyad. The group's atrocities include ethnic cleansing, torture, assassinations and murdering those who oppose their rulie and ideology. Ahmed al-Hajj Salih, a former member of Tal Abyad's city council, told Anadolu Agency (AA) that the YPG was plundering the homes of civilians and forcing Syrian Arabs living in the suburbs of Tal Abyad, a Syrian border city under the al-Raqqa governorate, to migrate.

"Violations in Tal Abyad's suburbs have reached the dimensions of ethnic cleansing, torture and murder. Signs of torture were found on the bodies of some people who were detained by the YPG and later found dead in Ayn Isa and some other villages," he said.

Ahmed Enver, Ibrahim Faisal, Muslum Aykurt, Hasan Buyruk, who are locals from Tal Abyad, jointly told AA on Dec. 22 that the people of the city look forward to seeing the YPG be ousted from the region because their life turned into a nightmare after the terrorist organization took control of the area. Their clear message is, "We want to return our homes and peaceful lives with the support of Turkey."

Not only do Arabs and Turkmens suffer from the YPG's oppression, but Kurdish dissident politicians are under constant threat if they don't comply with the YPG's policies in northern Syria or agree to be mentioned in a rhetoric equating the terrorist organization with Syrian Kurds.

During a phone conversation with the head of the Independent Syrian Kurds Association, Abdulaziz Temo stressed that they have been waiting for Turkey's operation to end the oppression and atrocities committed by the YPG and they will support any steps taken to remove the terrorist group from the region.

"Yazidis, Assyrians, Kurds, Arabs, Turkmens, Alevis, Sunni or Shiite... They have conducted all types of inhuman oppression against all no matter who they are," he said.

Temo also emphasized that the Bashar Assad regime and YPG has been jointly working to incite Syrians against Turkey.

"Turkey is our brother, Turkey is our friend. As Kurds, Turkmens and Arabs we say that no one can change this reality. We give our support to the Turkish Army and Free Syrian Army until the end," Temo said.

The YPG has kidnapped Kurdish politicians and figures who criticized them and they also collected ransom from businesses.

The YPG killed hundreds of political dissidents and its own members whom they suspected of losing belief in the organization. The YPG murdered at least 40 Kurdish opposition politicians, activists, and journalists between 2012 and 2014 but slowed down when they received Western backing.

Abdullah Kedo, a member of the Yekiti Party, - an extension of the Syrian Kurdish National Council (ENKS), which is a coalition of 12 Syrian Kurdish parties and is known to oppose the YPG - told Sabah newspaper on Dec. 27 that YPG forces have been confiscating their homes and they have shut down the offices and extensions of other Kurdish political parties that opposed these policies.

Pointing out that they have been always been experiencing oppressive policies by the terrorist organization, Kedo added that the YPG confiscated the home of İbrahim Bro, who is in charge of foreign affairs in the ENKS in Syria and raided the home of Fuad Aliko, a representative of ENKS.

Commenting on the oppressive policies of the YPG, Kamiran Hajo, another official from the ENKS, also told Hürriyet newspaper that "the YPG has long been oppressing the ENKS, imprisoning our colleagues, shutting down our offices and banning our political activities." He added there are several Kurdish dissidents that are still in prison due to their anti-YPG remarks.