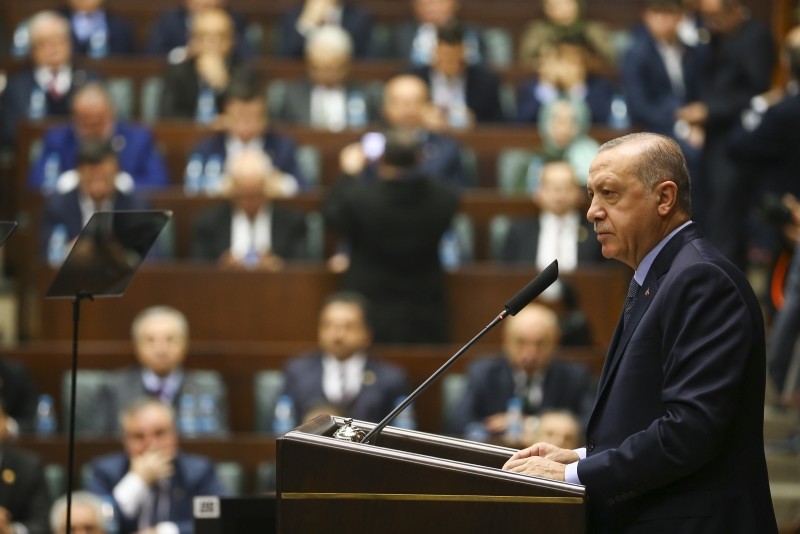 Ankara reiterated its determination to clear northern Syria from all terrorist elements on Tuesday, as President Erdoğan confirmed that a third offensive in the region will be launched very soon

"YPG cannot represent the Kurds. Turkey cannot accept the U.S.' condition of ensuring the safety of YPG terrorists in Syria," Erdoğan said, noting that equating the YPG with Kurds is not logical. He highlighted that Turkey does not target ethnicity, but targets terrorism, regardless of the terrorists' background.

"We distinguish between the terrorists and innocent people by looking at who holds the guns and who they target with them, the actions they carry out, the blood they shed and the oppression they commit," Erdoğan said.

"If there are other terrorists trying to obstruct our efforts, we will surely deal with them as well," the president said, in reference to the YPG.

The president also said that Turkey has completed the preparations for a military operation against Daesh elements still active in Syria and will soon take action to take them down.

He noted that the claim about YPG fighting Daesh is completely a lie and that Turkey accepted over 100,000 Kurds fleeing Kobani when Daesh attacked the city, and they did not go back after the YPG forces took over.

Erdoğan said their decision not to return was "because these people knew that their lives, property and honor would not be secure when one terrorist group was replaced with another one."

"It is impossible to accept the message given by Mr. Bolton in Israel," Erdoğan said. "Claims that Turkey targets Kurds in Syria is dishonorable, ugly, vulgar and defaming."

The president further expressed that the underlining purpose of these remarks is to falsely influence people who are not quite familiar with the issue as well as the international community.

"We've never asked, and will not ask, about anyone who came to our country from Syria to save their lives; neither their religion, roots, nor any other thing. We acted in a similar way in the past as well," Erdoğan said, referring to the previous migrations of Kurds to Turkey, including the ones fleeing from Iraq during the Saddam Hussein era.

Until a U.S.-led invasion toppled Saddam in 2003, his ruling Baath Party had maintained a tight grip on Iraq, and most particularly the Kurds, for more than three decades, causing many to take refuge in Turkey during the early 1990s. In 1992 alone, 2.5 million Kurds had to migrate from Iraq due to oppression and they came to the southern districts of Şemdinli, Silopi and Çukurca.

Similarly, during the siege of Kobani city in northern Syria by Daesh in 2014, some 300,000 Kurds fled to Turkey and the country, once again, opened its doors without hesitation.

Since 2011, Turkey has received a constant flow of displaced Syrians fleeing the conflict, and their numbers have expanded from mere thousands to millions. Currently, there are more than 3.5 million Syrian refugees in Turkey, which is the highest number in the world. Over 475,000 of these Syrian refugees, 300,000 of whom are Kurds, came from YPG-controlled areas of the war-torn country.

"Whoever labels the oppressed as Turks, Turkmens, Kurds, Arabs or Yazidis, they are the partners of the cruel," Erdoğan underscored, indicating that Turkey would not go anywhere to destroy a society or innocent people.

"Turkey would only go [to a place] to bring peace, provide trust and win the hearts, except for the terrorists," he added.