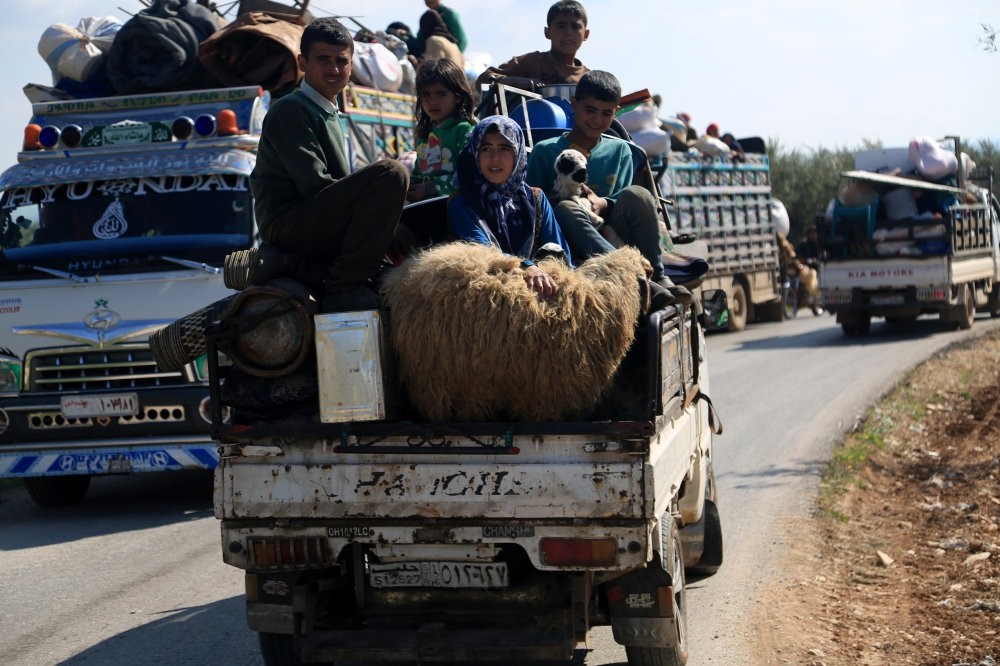 Due to the brutal actions of the YPG terrorist group, thousands of Syrians were displaced and moved to liberated regions. This photograph shows some of them moving to Afrin, March 13.
by Tuğçe Kılıç Jan 10, 2019 12:00 am

In a bid to strengthen its grip over the areas under its control in Syria, the PKK-affiliated People's Protection Units (YPG) have committed human rights violations, a means adopted by every other terrorist group, including Daesh. "Although the YPG and Daesh may seem different, they share common grounds in regards to human rights violations. All the terrorist groups, including Daesh and the YPG, eliminate those who do not share their ideologies and oppress them by using an element of fear," Cemil Doğaç İpek, an academic and coordinator at the Syrian Turkmens Assembly, told Daily Sabah yesterday.

During its near half-decade rule, Daesh curdled the whole international community's blood with a series of large-scale, systematic crimes against humanity and violations, ranging from genocide, sexual slavery, torture, forceful displacement of people, deliberate destruction of private property, child soldier recruitment, killing and kidnapping. Despite an attempt by U.S. officials to paint their ally on the ground as the "representatives of Syrian Kurds," many international human rights organizations and even the U.S. State Department have taken the "freedom fighter" lid off the YPG by documenting their extensive human rights violations.

Cemil Doğaç İpek said that human rights violations of Daesh caught the international community's attention, yet the world turns a blind eye to the same kinds of violations committed by the YPG for some reason. "The two groups have not entered into too much conflict but they have learned the means of oppression from each other," he said.

Turkey has long warned that it is not rational to fight one terrorist group with another. The U.S., however, while listing the PKK as a terrorist group, opted to continue its steadfast militarily support for the YPG terrorist group, under the pretext of fighting Daesh.

For instance, in 2017, Human Rights Watch (HRW) revealed that YPG forces restricted the freedom of movement of displaced persons from Raqqa and Deir el-Zour province who end up in displacement camps in the territories under the terrorist group's control.

Amnesty International documented a wave of forced displacement and home demolitions amounting to war crimes, carried out by the autonomous administration dominated by the YPG in 2015.

The report also uncovered some cases where the YPG forced locals to leave the cities by threatening to shoot them and setting their houses on fire while the inhabitants are still inside if they refuse to leave the city.

The organization also published eyewitness accounts and satellite images, detailing the deliberate displacement of thousands of civilians including Kurds and the razing of entire villages in areas under the control of the terrorist group. The satellite images showed 225 buildings standing in June 2014 but only 14 remaining in June 2015, in Husseiniya village and in Tel Hamees countryside, a reduction of 93.8 percent.

The report further underscored "extensive displacement and destruction did not occur as a result of fighting. Clear evidence revealed a deliberate, coordinated campaign of collective punishment of civilians in villages previously captured by [Daesh]."

Not representative but enemy of Kurds

İpek pointed out that Kurds, who according to U.S. officials are represented by the YPG, are one of the people that suffered the most at the hands of the terrorist group in northern and eastern Syria.

YPG forces use excessive force against locals who oppose the policies of the group or who try to protest them. In 2013, for example, HRW said that the terrorists killed eight men in Amuda, a town in the Hasakah governorate, following an anti-YPG demonstration on June 27, 2013. On the same day, the YPG also arrested around 50 members or supporters of the opposition Yekiti Party in Amuda and later tortured them at a military base.

A 107-page report published by HRW in 2014 documented cases where the YPG-run police, known as the Asayish, appeared to have arrested members of the Kurdish opposition parties due to their political activity. At least nine political opponents were either killed, disappeared or arrested between 2012 and 2014 in areas the partially or fully under the control of the YPG.

After the outbreak of the Syrian civil war, the U.S.-backed YPG began taking control of areas from the Syrian regime and Daesh. The power vacuum also gave the YPG an opportunity to practically apply its form of governance and form communes, as dictated by its ideology. After Daesh was cleared from the region with U.S. help, the YPG tightened its grip on the cleared areas by establishing nine committees, similar to ministries, for various roles.

Pushing children to the battlefront

Even children cannot escape the atrocities of the terrorist group. Young children were forced to take up arms to fight in the name of the group – an act regarded as a war crime under international law. Like many other terrorist groups, particularly Daesh, the YPG uses child soldiers in combat, to address the group's needs and train future militants.

"When we are on the ground, we encounter many families that say their children, some as young as 9 or 10, were forcefully taken from them and sent to Qandil, where the PKK headquarters are located. Children, who were subjected to brainwashing and indoctrination by the group, are forced to engage in terrorist activities," İpek said.

He added that not only Kurdish children but also children from prominent Arab tribes were forcefully recruited by the group.

In 2014, an HRW report said that the YPG used minors at checkpoints and in combat missions since their establishment.

"Despite having signed a pledge of commitment with an international group in June 2014 to demobilize all fighters younger than 18, the YPG recruited and trained children as young as 12 years old in 2016," the U.S. State Department said in its Trafficking in Persons Report of 2017.

In 2018, a U.N. annual report on children in armed conflict found 224 cases of child recruitment by the YPG between January and December in 2017, a fivefold increase compared to the previous years. A report by HRW in 2015 also stated that at least 59 children, including 10 children under the age of 15, were forced to serve in the YPG's ranks as of January 2014.