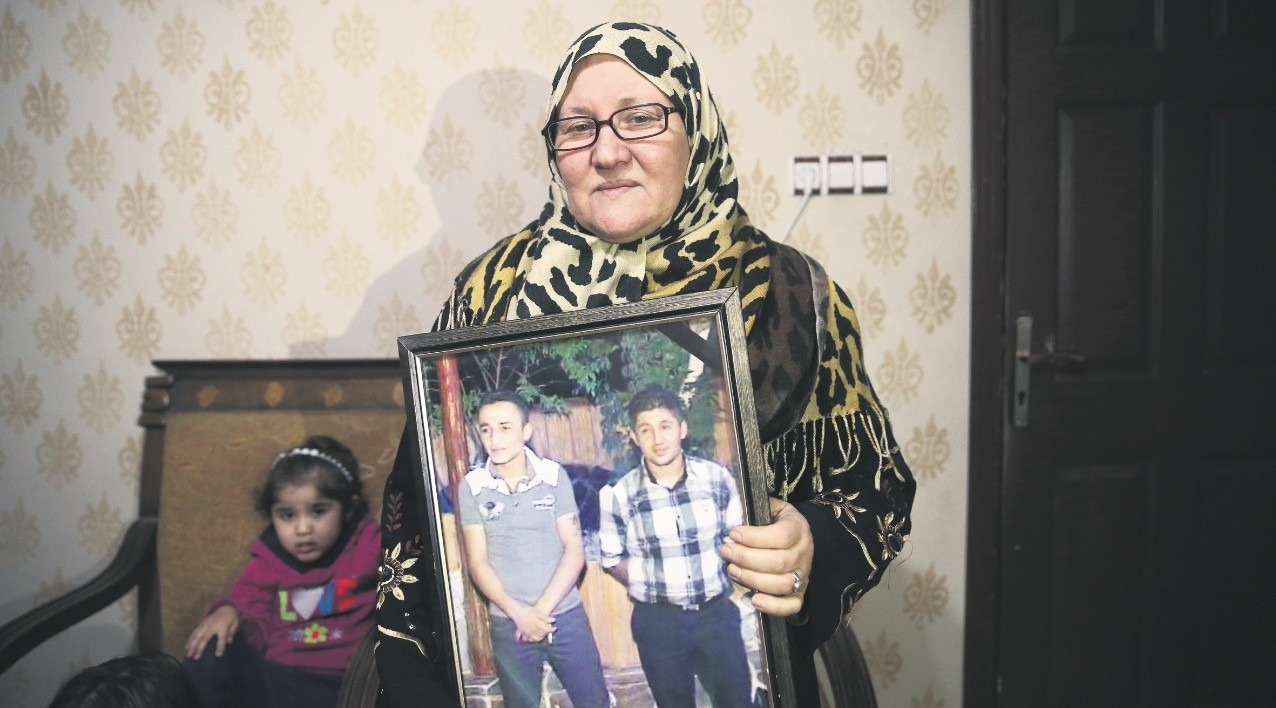 Meryem u015eeyhani, 58, escaped from YPG brutality and migrated to the southern Turkish province of u015eanlu0131urfa, where she currently lives in a rented house with her grandchildren.
by Daily Sabah Jan 11, 2019 12:00 am

YPG barbarism in northern Syria has led to thousands being displaced, including Meryem Şeyhani, who is still mourning the loss of her sons, killed by the terrorist organization

A member of one of the wealthiest Kurdish families in the northeastern Syrian province of Qamishli, Meryem Şeyhani, 58, tries to hold on to life in Turkey with her grandchildren, after the killing of two of her sons by the PKK's Syrian affiliate, the People's Protection Units (YPG), which also confiscated all her properties.

Losing her two sons at a very young age to YPG barbarism, Şeyhani migrated to the southern province of Şanlıurfa in Turkey and currently lives in a rented house with her grandchildren.

"I cannot stop thinking about my sons," Şeyhani said, emphasizing that she cannot forget what she and her family have been through in Syria, mostly due to the atrocities of the YPG.

Speaking to Anadolu Agency (AA) about her sorrowful past, Şeyhani said that the beginning of the war in Syria in 2011 turned their lives into a nightmare, especially after the capture of Qamishli by the YPG.

"At first, we, as one of the wealthiest families in the region, were helping displaced Syrians who fled to Qamishli from other war-torn provinces. We gave our triplex house to these people. However, when the YPG came, it removed these people from the house and threw them on the street since they were not supporters of the terrorist organization," Şeyhani said, adding that those who went against the YPG were also detained.

"Still," she indicated, "we did not bow to them. Then, they confiscated our vehicles, houses and workshops. And then we had to flee to Ras al-Ayn," she said.

"May Allah make them suffer [the YPG terrorists] as they have made me suffer. They have done nothing but bad things to us, confiscating our properties and destroying everything," she added.

Underlining the difference between Kurds and the terrorist organization, Şeyhani said that as a Kurd herself, she thinks that no other group has caused more trouble for the Kurdish people than the YPG.

However, the suffering of Şeyhani does not end in Ras al-Ayn. Two of her sons, Taha and Muayyed, were killed in the province while fighting the YPG. After the incident, her journey to Turkey began.

Şeyhani is one of the thousands who took refuge in Turkey due to YPG brutality in their hometowns, leading Turkey to open its doors to 512,708 Syrian refugees fleeing YPG-held areas, while another 300,000 Syrian refugees took shelter in Iraq.

After settling in Turkey, Şeyhani's oldest son Mohammad, who she describes as the last hope she was hanging on to, moved to Germany with his family. However, later on, he returned to take part in Operation Olive Branch. "Since then, I have not heard from him," Şeyhani said in tears, "that's why I'm taking care of my daughter-in-law and grandchildren right now."

Previously, Human Rights Watch (HRW) revealed that YPG forces restricted the freedom of movement of displaced persons from Raqqa and Deir el-Zour province who had ended up in displacement camps in territories it controlled.

Amnesty International documented a wave of forced displacements and home demolitions amounting to war crimes, carried out by the autonomous administration dominated by the YPG in 2015.

The report also uncovered some cases where the YPG forced locals to leave cities by threatening to shoot them and setting their houses on fire while the inhabitants were still inside if they refused to leave. The organization also published eyewitness accounts and satellite images, detailing the deliberate displacement of thousands of civilians including Kurds and the razing of entire villages in areas controlled by the terrorist group.

Meanwhile, the YPG also killed a civilian who had received death threats and had been forcibly displaced in Syria on Wednesday, according to local sources.

The terrorist group raided a refugee camp that hosts thousands of families in Abriha village on the eastern outskirts of Deir el-Zour.

Terrorists shot dead the civilian, who refused to move to the Hol region in al-Hasakah.