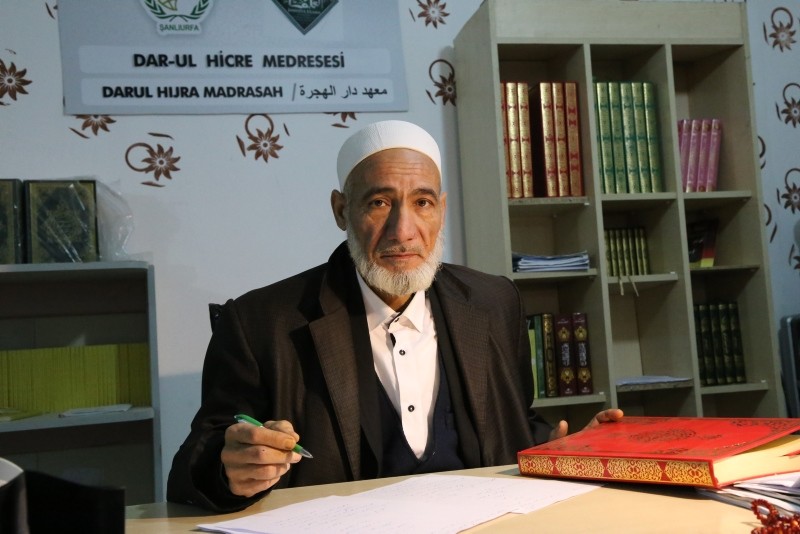 Muhammad Mashar Hassan used to be a teacher in Hasakah before the Syrian civil war broke out. (AA Photo)
by Daily Sabah with AA Feb 13, 2019 12:29 am

Syrian Kurdish refugees, who took shelter in Turkey after fleeing from the atrocities of the PKK terrorist group's affiliate the People's Protection Units (YPG) say they want to return home but will only do so when the areas are freed from all terrorist threats.

Muhammad Mashar Hassan, a 57-year-old Kurdish reverend who had been a teacher in Syria's Hasakah before they had to leave their town due to bombardments, told Anadolu Agency (AA) that many Syrian Kurds, like him, fled from provinces such as Ayn al-Arab, Ras al-Ayn or Qamishli because of the YPG terror group's systematic persecutions.

"If Kurds were comfortable in the areas captured by the YPG, they would not migrate from there and would not leave their homes. Due to the terrorists' oppression, many Kurds fled to Turkey and Europe. People fled from the oppression they faced in placed they were born, raised and lived because the YPG did not accept anyone other than themselves," Hassan said.

Hassan stressed that the YPG who tries to speak on behalf of all Kurds saying they are 'protecting' them do not speak the truth.

"Neither the Kurds nor the Arabs or any other nation makes sense to them. They only accept their own ideas."

The Turkish government, however, Hassan said "treated us equally," adding: "They provide equal help without dividing people as Kurdish or Arab. There are lots of Syrian Kurds in Suruç camp. Most of them are from Kobani and are Kurdish, but Turkey does not treat them differently, it protects them."

Turkey has established the biggest tent city in the Suruç district of the southeastern province of Şanlıurfa to host Syrian Kurds escaping from YPG-held areas. Educational and health facilities are provided in the tent city to help refugees live in a secure and peaceful place.

Hassan underscored that he has been living in Turkey's Şanlıurfa province for almost six years now and he is able to maintain his occupation here.

"It is not enough how much we thank the Turkish government and people. Turkish people welcomed us as their guests in the best way. May Allah bless them," Hassan said.

Syrian Kurds have suffered the most from the YPG's atrocities, although certain countries insist on equating the terrorist group with Kurdish people. Turkey, however, opened its doors to 512,708 Syrian refugees fleeing YPG-held areas, while another 300,000 Syrian refugees took shelter in Iraq.

Saying that people are coming to Turkey to find refuge and be safe while living in accordance with their religion which is not possible in Syrian territories controlled by the YPG , Hassan added: "No one would stay here [in Turkey] if the terrorist organization left those areas. Our expectation, our hope is for the war to end, the region to be stabilized, the terrorists to leave and a humanitarian order to be established. Of course, we will return, but the YPG and its supporters are not allowing this to happen at the moment."

Another Kurdish refugee, Salih Ibrahim who escaped from Syria's Ras al-Ayn told the AA that the terrorists captured their houses and forced their children to take part in clashes, adding: "That is why we fled to Turkey. Even though we are comfortable here, it is not the same as being at home. Thus, we want to go back."