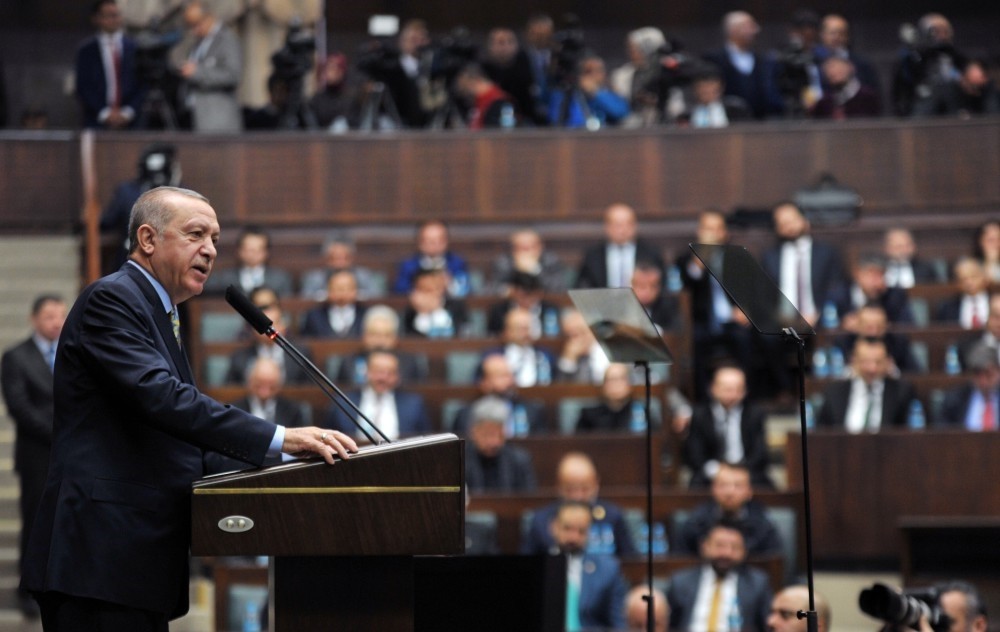 Ankara has been calling for a safe zone in northern Syria since 2012. Now, concrete steps are being made to turn the proposal into a reality, a step welcomed by the U.S. as well

Turkey will establish a safe zone in northern Syria along the length of its border with the assistance of the U.S.-led coalition forces, President Recep Tayyip Erdoğan announced Tuesday. Speaking at a Justice and Development Party (AK Party) group meeting in Parliament, Erdoğan said that he had a positive discussion with his U.S. counterpart, Donald Trump, over the establishment of the safe zone, something suggested by the Turkish authorities for years now. "We have reached an understanding that is of historic importance," he said. Erdoğan had a phone call with Trump on Monday on the latest developments in Syria and bilateral ties, amid a diplomatic spat over the U.S. withdrawal from Syria.

"The safe zone issue, including one along Turkey's borders to be formed by us, is something I have discussed since the Obama era. It was reiterated by him [Trump] as 20 miles [32.19 kilometers]," Erdoğan said. He later told reporters that the zone could be extended beyond 20 miles, but did not say how far. Turkey has long called on the U.S. and the international community to support the establishment of a safe zone in northern Syria, a call that drew little support. Erdoğan has been suggesting since 2012 that a safe zone of 30-40 kilometers could be established between the northern Syrian towns of Jarabulus and al-Rai. At that time, Turkey had three main aims with the suggestion of safe zone: To put an end to the damage caused by Syrian regime attacks, to prevent Syrian people from migrating and lastly, to avoid terrorist organizations from flourishing in the country.

If a safe zone was established in the region back then, some consider that some of the main problems caused by the Syrian war today, such as the refugee crisis or terrorist organizations, would not exist. Today, however, the main aim is to enable the refugees to go back to their hometowns while clearing the terrorist elements from the region altogether.

Regarding the matter, Erdoğan previously said that the safe zone would also function as a no-fly zone and could be a convenient area to host Syrian refugees with new housing projects.

He reiterated his suggestion Tuesday, saying that Turkey could build a secure area near the border with the financial help of coalition forces. These secure areas would have homes built exclusively for the people of the area, in line with their customs and lifestyles and would prevent migration as well, the president said.

Erdoğan noted that he had previously mentioned this issue to other leaders, including German Chancellor Angela Merkel and Saudi Crown Prince Mohammed bin Salman at the G20 Summit in China, who even proposed providing financial support for the initiative but did not follow up.

"When you say safe zone, you'll clear the whole area from the terrorists," the president underlined, referring to the presence of the PKK's Syrian affiliate, the People's Protection Units (YPG), and Daesh in the region.

Erdoğan also said he was saddened by Trump's tweet but that the phone call later in the day was positive.

"Turkey will continue to do what it has to in order to solve this issue in line with the spirit of its alliance, so long as our rights and laws are respected," he said.

Earlier Monday, Trump on Twitter said the U.S. was starting a "long overdue" pullout from Syria, and Washington would strike from a nearby existing base if Daesh started to reform.

Trump also said Washington would "economically devastate" Turkey if Ankara decided to strike against the U.S.-backed YPG militants in the region.

Erdoğan said Ankara would solve issues with a "spirit of alliance" with Trump as long as Turkey's sensitivities were taken into account.

"I told Trump once again that Turkey prioritizes an effective fight against Daesh and other terrorist groups in Syria," Erdoğan said, adding that he also said that Turkey welcomed everyone fleeing Syria with open arms, regardless of their ethnic or religious background, and that the YPG oppresses all groups, including Arabs, Kurds and Christians, who do not submit to their rule.

"We also told him that the YPG tortures the groups in Syria that do not depend on them. We also said that we have given all document on this issue to his advisers," said Erdoğan.

Following the phone call, Trump also "expressed the desire to work together to address Turkey's security concerns in northeast Syria while stressing the importance to the U.S. that Turkey does not mistreat" the YPG, the White House said in a separate readout of the call.

Erdoğan also called on Kurds not to be fooled by terror groups, particularly the YPG, adding: "I call on my Kurdish brothers. You should not be deceived by this game."

Ankara has been infuriated by the U.S. support for the Syrian Democratic Forces (SDF), which is dominated by the YPG, under the pretext of fighting Daesh.

The U.S. provided military training and supplied truckloads of weapons to the YPG, disregarding warnings from Ankara that the YPG is organically linked to the PKK and that collaborating with one terrorist group to fight another was not acceptable.

Erdoğan has signaled previously that a cross-border operation against the YPG terrorist group in northeastern Syria will happen in the coming days. Since 2016, Ankara has carried out two similar military operations in northern Syria.