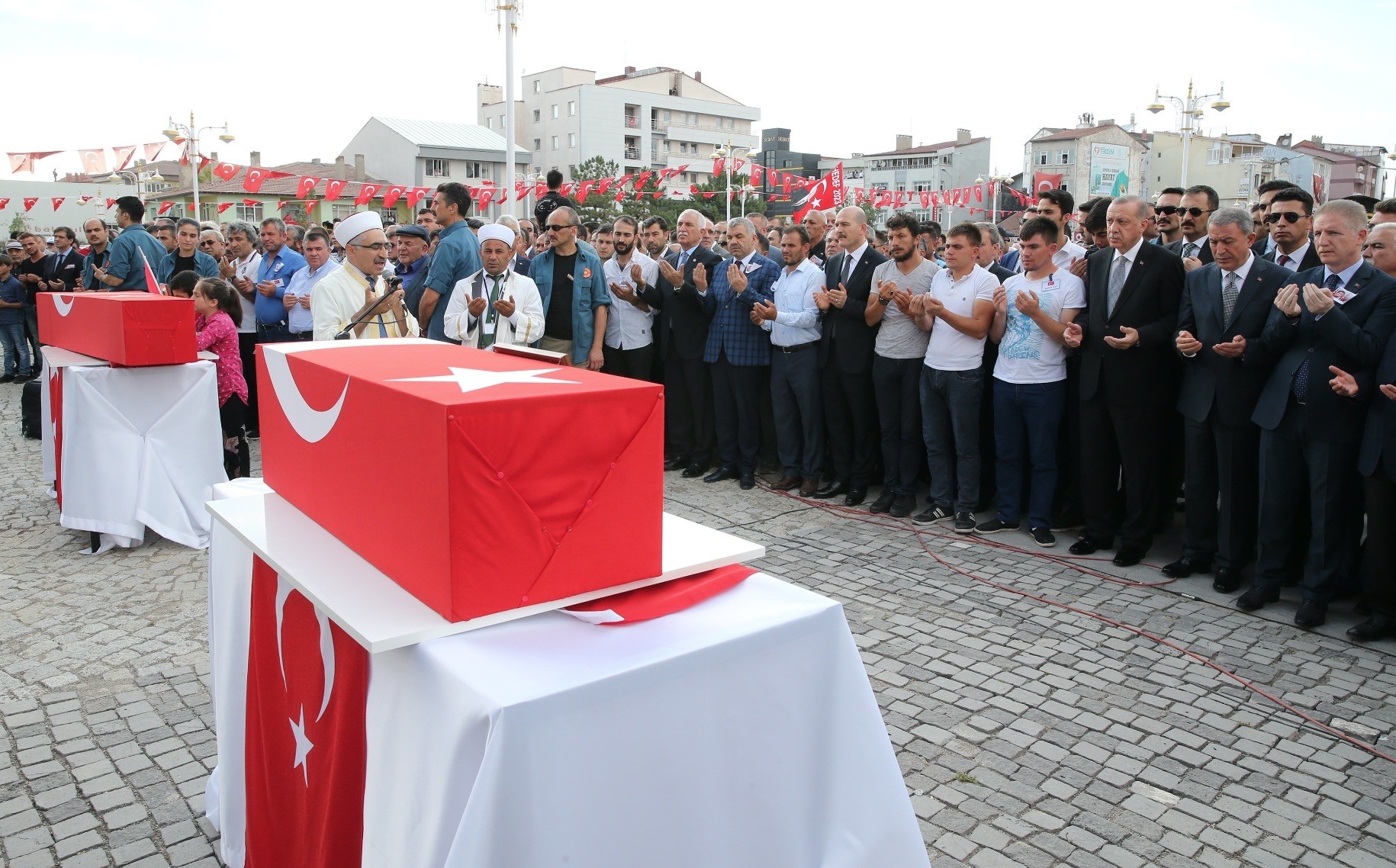 President Recep Tayyip Erdou011fan attends the funeral of Nurcan Karakaya and her 11-month-old son, Mustafa Bedirhan Karakaya, who were killed in a roadside bombing by the PKK in the southeastern province of Hakkari, July 2, 2018.
by Daily Sabah with AA Feb 13, 2019 12:29 am

The PKK brutality that has continued for over 40 years did not stop in 2018. The terrorist group killed 27 civilians, including women and children, in a number of attacks

In March 2018, in Yüksekova district of the southeastern Hakkari province, 10-year-old Berat Oktay was killed when an explosive device planted by the PKK went off.

In May 2018, in southeastern Mardin's Nusaybin town, 11-year-old Hogir Kayran lost his life when an improvised PKK explosive was set off.

In July 2018 a roadside bombing by the PKK terrorist organization killed Nurcan Karakaya and her 11-month-old son Mustafa Bedirhan Karakaya in the southeastern province of Hakkari.

The bomb exploded when a car carrying the civilians passed through the Yüksekova district. Killing babies is not a new phenomenon for the terrorist organization. In fact, the jailed ringleader of the PKK, Abdullah Öcalan, is engraved in people's memory as a "baby killer" due to the killing of 3-year-old Serkan Erdem by the PKK in 1993 in southeastern Siirt province along with 22 other people.

Since then, the killing of the children and babies by the terrorist organization continued. For instance, in 2011, PKK terrorists opened fire on a car in Batman, killing a pregnant woman and her daughter. The baby was delivered through c-section but only managed to live for another day.

In another incident, on Jan. 14, 2016, six people, including a 5-month-old baby, were killed in a vehicle bombing in Çınar district of Diyarbakır, where 39 other people were injured. Similarly, on Aug. 11, 2017, baby Ceylin Naz Aydın was killed in a bomb attack in Diyarbakır.

The PKK also continued threatening civilians and executed those who refused to cooperate with the terrorist organization in 2018.

One of those victims was Mevlüt Bengi who was kidnapped and killed by the PKK in the eastern Doğubayazıt district of Ağrı province.

Another victim, Veysi Şaşkın, was shot by a PKK terrorist in his village in Silvan district of Diyarbakır in March 2018.

Kadir Arslan was also kidnapped and killed by the PKK in the southeastern province of Hakkari.

The 18-year-old Engin Kenanoğlu was killed in an attack by PKK terrorists in southeastern Şırnak province while he was collecting firewood in March 2018.

The terrorists also killed Nurullah Kılıçaslan in a forest in southeastern Bitlis province.

In July, PKK terrorists killed Remzi Güler and his son Mahmut Güler in Diyarbakır's Lice district, for "spying for the Turkish government."

Nurettin Karadeniz was killed on July 28 in Ağrı province when a mine planted by the terrorists went off.

Ali Cam was killed on Oct. 9, 2018 in Hakkari's Çukurca district in a PKK terrorist attack on a Turkish military outpost on the Iraqi border.

Erol Tekin was killed on Oct. 25, 2018 by the terrorist organization for supporting the Turkish government.

On Nov. 24, 2018 Rıdvan Acar succumbed to his wounds he sustained in a missile attack by the PKK in Hakkari's Çukurca district.

Formed in 1978, the PKK, recognized as a terrorist group by Turkey, the U.S. and EU, has been waging violent attacks against the state and citizens since 1984, during which nearly 40,000 people have been killed.