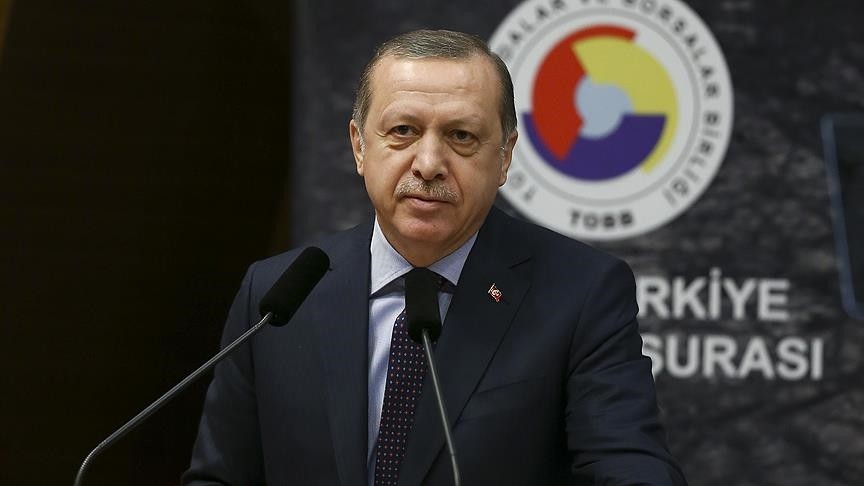 Turkey wants to ensure security in Syria's Manbij and hand it back to the real owners of the city, President Recep Tayyip Erdoğan said Monday, highlighting Turkey's determination to protect Syria's territorial integrity.

"We have no eyes on anybody's land," Erdoğan told an economic conference in Ankara.

Erdoğan noted that he will be traveling to Russia on Wednesday to discuss the Syrian crisis with President Vladimir Putin.

"We sincerely hope that our talks with the U.S., Russia and other actors end with a common understanding," Erdoğan said, adding that this does not mean Turkey will stand idly by and wait for terrorist groups to take over the control near the borders.

Erdoğan continued by saying that things will go smoothly if everybody keeps their promises regarding Syria's Manbij and the safe zone near the border, but Turkey will otherwise take action and take steps in line with its own strategies.

"We will never allow the formation of a safe zone that will be turned into a new ground for terrorists," he added.

Manbij town and its surrounding area have been controlled by the U.S.-backed Syrian Democratic Forces (SDF), which is dominated by the YPG terrorist group, since August 2016 after ousting Deash terrorists who captured the town from moderate opposition in January 2014.

Turkey strongly opposes YPG's presence in Manbij and reached a deal with the U.S. in June to end the terrorist group's presence.