Locals fleeing from YPG-controlled Manbij to liberated areas in Syria 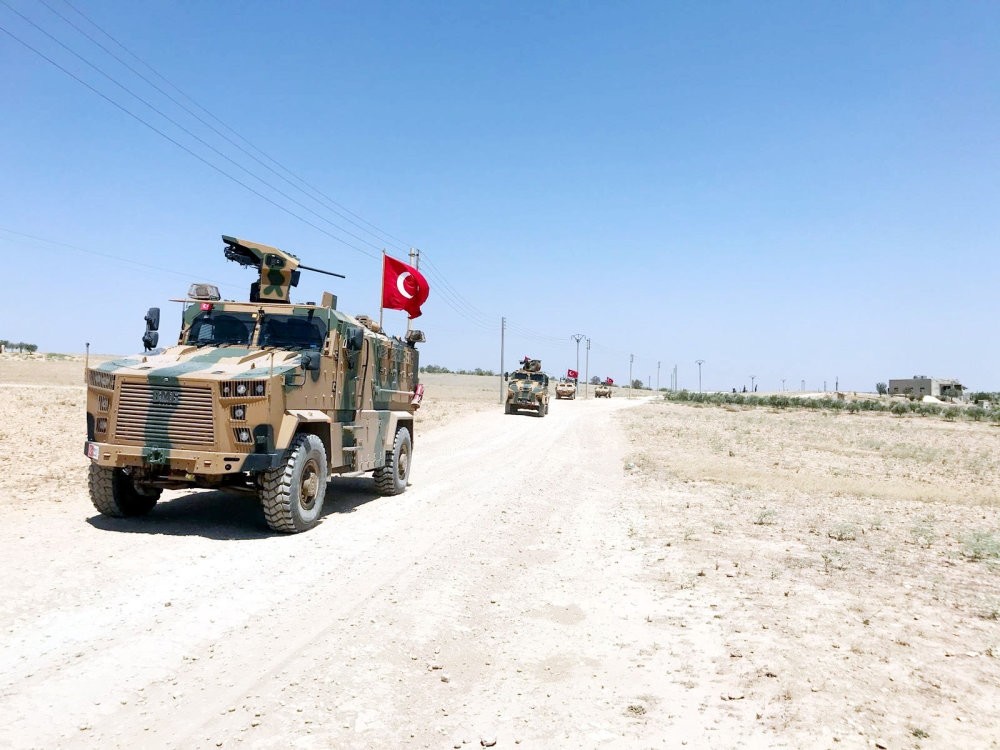 The instability in Manbij has gravely affected the locals, who are seeking refuge in areas in northern Syria that were liberated from terrorist elements by Turkish military offensives

Destabilized by suicide attacks, frightened locals have hit the road to take shelter in Turkish-controlled Jarablus from northern Syria's Manbij, which is under the control of the PKK-affiliated People's Protection Units (YPG). Hundreds of locals from Manbij have been rushing to the Turkey-controlled areas in fear after 19 people, including four U.S. military personnel, were killed on Wednesday in a bomb attack claimed by Daesh. According to recent data, people fleeing from the city have reached 700 per day, while long queues are being formed by people waiting to pass the checkpoints. The Turkey-backed Free Syrian Army (FSA) and the Turkish Armed Forces (TSK), on the other hand, increased safety measures in the crossing points to Jarablus, dispatching additional military equipment and personnel to the bases on the ground. In Jarablus, FSA forces also set up checkpoints on the roads leading to Manbij. While Turkish-backed forces do not allow vehicles to pass as a security measure, local people can enter into the city after a detailed search.

Following the suicide bombing in Manbij, another destabilizing attack Monday targeted the U.S.-backed YPG forces. A car bomb detonated close to a checkpoint in northwestern Syria's al-Shaddadah as a U.S. and YPG convoy was passing by, killing at least five YPG members and U.S. military personnel. Daesh has claimed responsibility for the attack.

The town of Manbij and its surrounding area have been controlled by the U.S.-backed Syrian Democratic Forces (SDF), which is dominated by the YPG terrorist group, since August 2016 after ousting Daesh terrorists who captured the town from moderate opposition in January 2014.

Turkey, however, strongly opposes the YPG's presence in Manbij, which has been a major sticking point in the strained relations between Turkey and the U.S., due to the latter's support for the YPG under the pretext of fighting Daesh. The YPG has organic organizational and operational links with the PKK, a group considered a terrorist organization by the U.S., the EU and Turkey. The U.S. has provided military training and given truckloads of military support to the YPG, despite its NATO ally's security concerns.

To reduce tensions, Turkey and the U.S. in June 2018 agreed on a road map foreseeing the withdrawal of the YPG from Manbij and installing joint Turkish-American patrols, which began in November. However, the process has been sluggish as the terrorist group was still present in the city despite the three-month timetable set for the implementation of the deal.

President Recep Tayyip Erdoğan discussed the issue with U.S. President Donald Trump in a phone conversation held late on Sunday. According to presidential sources, Erdoğan underscored that Turkey is ready to take over security in Manbij without delay and that Ankara agrees to take action to clear Daesh remnants out of Syria and prevent their return. Erdoğan further stated that Ankara will not allow the efforts of PKK and its extensions in Syria to destabilize northern Syria.

Erdoğan also stressed that the deadly terror attack last week in Manbij was a provocation to hinder the U.S.' withdrawal from Syria, referring to recent hesitation on the withdrawal process on the part of the White House. He also extended condolences for the slain U.S. personnel.

The two NATO allies are also looking to establish a 32-kilometer area aiming to create a safe zone, something suggested by Ankara several times since 2012. The zone is aiming to allocate a secure zone for Syrian refugees to live in peace and free the area of all terrorist elements including the YPG, which the U.S. does not regard as a terrorist organization but an ally.

Ankara has been underlining that it will not allow the YPG to strengthen its grip in Syria. Turkey was prepared to launch an operation east of the Euphrates to eliminate the YPG. However, following the U.S.' decision to pull out of Syria, Ankara decided to put the operation on hold for some time.

Despite the delay in the operation, TSK and FSA forces have been mobilizing in the area. Reportedly, members of the FSA are also emphasizing that the YPG can be eliminated from Manbij with Turkish support.

Commenting on the likely operation, Defense Minister Hulusi Akar told military students at the National Defense University yesterday that Turkey will resolutely continue its fight against all terror groups both at home and abroad and will continue until the last terrorist is eliminated.

Akar pointed out that that there is no difference between the PKK terrorist organization and the YPG, adding that the connection between the two is well documented and cannot be questioned.

Touching upon Ankara's fight against Daesh, Akar said, "No coalition power has fought against Daesh as we did in close combat." He further added that during Ankara's previous two cross-border operations more than 3,000 Daesh terrorists and 4,500 YPG terrorists were killed.

Meanwhile, Hürriyet daily reported yesterday that the YPG has been continuing to construct trenches and embankments east of the Euphrates in preparation for an imminent Turkish-led offensive.