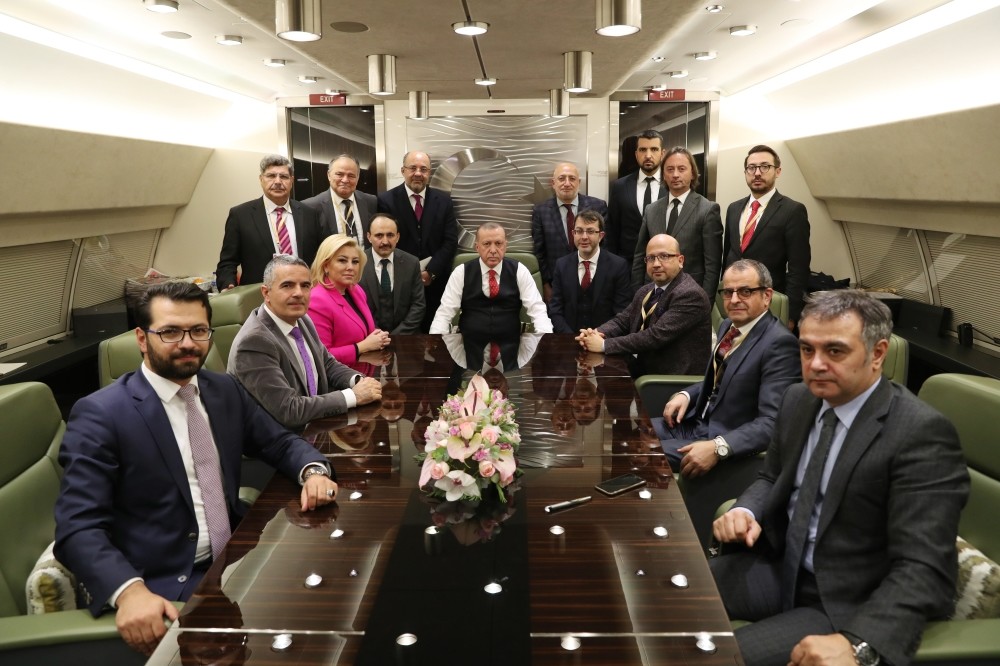 Turkey is ready to eliminate Daesh and YPG terrorists from northern Syria to bring peace and stability to the region, in turn it expects logistical support from its allies, particularly the U.S. and Russia

Turkey is fully capable of clearing all terrorist elements, including Daesh and the PKK's Syrian affiliate, the People's Protection Units (YPG), from northern Syria and bring security and stability to the region, President Recep Tayyip Erdoğan said Thursday.

"We are capable of establishing security and stability in Idlib, Manbij and also east of the Euphrates," Erdoğan told journalists accompanying him during his visit to Moscow Wednesday. Erdoğan met Russian President Vladimir Putin in Moscow, where they discussed bilateral economic and political issues, particularly the latest developments in Syria and the fight against terrorism.

The two leaders also discussed Ankara's proposal for a safe zone and the U.S. withdrawal from the war-torn country. "We tell the U.S. and Russia that if you provide logistical support, we can clear this region from all terrorist groups, beginning with Daesh, and bring in peace and quiet," said Erdoğan, referring to Turkey's safe zone proposal in northern Syria. Coinciding with the U.S. decision to withdraw troops from Syria, Erdoğan on Jan. 15 said Turkey was ready to establish a 32-kilometer (20 mile) safe zone in northern Syria that would allow the safe return of Syrian refugees.

Erdoğan, since 2012, has suggested creating a 30 to 40-kilometer safe zone between the northern Syrian towns of Jarablus and al-Rai.

In a joint press conference following his meeting with Putin Wednesday, Erdoğan said: "The U.S. has replied positively. Neither do we have problems [concerning the safe zone] with Russia."

MANBIJ MUST BE CLEARED OF YPG TERRORISTS

Ankara is coordinating with all actors to eliminate terrorist elements from Syria, the president said. He added that the clearing the YPG from Manbij was also discussed with Russia.

Turkey and the U.S. have agreed on a road map to clear the YPG from Manbij and hand the province to an administration that would reflect the demographic realities of the province. The road map, however, has not been realized within the given time frame.

Erdoğan said the latest intelligence in Ankara suggests that there are still around 1,000 YPG terrorists in Manbij. He added that while the province originally was home to a large Sunni-Arab population - which he said was 85-90 percent of the overall population of 700,000 - many have fled due to YPG oppression.

"At this point, both Russia and the U.S. say the YPG terrorists will leave Manbij," he added.

Erdoğan said Turkey's goal in Manbij is to "ensure the locals can safely return home," once the YPG is eliminated.

He also criticized the U.S.-YPG partnership in taking Raqqa from Daesh, an operation that took longer than anticipated and caused a large number of civilian casualties.

"The U.S. committed a great mistake in Raqqa and paid a heavy price. If they had accepted our offer, Raqqa would have been liberated much quicker and the refugee flow and casualties could have been avoided," said Erdoğan.

Washington sees the YPG as its most effective partner in the fight against Daesh, despite the fact the group shares organic links with the PKK, a group listed as a terrorist organization by the U.S., the EU and Turkey.

International human rights groups reported a large number of casualties during the Raqqa operation by the U.S.-led coalition and the YPG.

The president said the latest developments in Idlib were also discussed during his meeting with Putin.

"We will not permit any terrorist groups to be active in Idlib," said Erdoğan, and he added that the Idlib deal with Russia was a vital step toward ensuring the safety of civilians, avoiding a massacre and mass refugee movements.

Idlib, located near the Turkish border, is the last opposition stronghold in Syria. It has been protected by a buffer zone implemented as part of a Turkish-Russian deal, known as the Sochi deal, reached in September.

Prior to the deal, the Bashar Assad regime was preparing for a full-scale operation toward Idlib, which is home to over 3 million civilians.

Under the deal, opposition groups in Idlib remain in areas where they are already present, while Russia and Turkey conduct joint patrols in these areas to prevent renewed fighting.

"There are radical groups attempting to overshadow the process [in Idlib]. There is uneasiness in Russia due to this and Russia's uneasiness is also reflected on us. We need to overcome these immediately. We believe that, together with Russia, we can achieve peace and prosperity in Idlib," Erdoğan said.

SYRIANS CALL ON TURKEY FOR HELP

Commenting on the 1998 Adana Agreement, signed between Turkey and Syria, Erdoğan said it is a deal that is still in place.

The Adana Agreement was signed between Turkey and Syria in October 1998, which clearly stated that Syria would not allow any PKK activities within its borders and would block any terror activities that would threaten Turkey's sovereignty.

During the joint press conference Wednesday, Putin also said that the Adana Agreement was still valid.

The YPG's presence in northern Syria may be considered within the scope of this agreement. Erdoğan expressed, however, that it was out of the question for Turkey to maintain diplomatic ties with the Bashar Assad regime, which has "killed nearly 1 million civilians and displaced millions of others."

Responding to criticism over Turkey's presence in Syria, Erdoğan said it is the Syrian people who have called on Turkey for help and protection.

He also underlined that Turkey was attacked numerous times by Syrian terrorist groups and "Turkey did not need to be invited."