YPG kills young Syrian for refusing to join its ranks 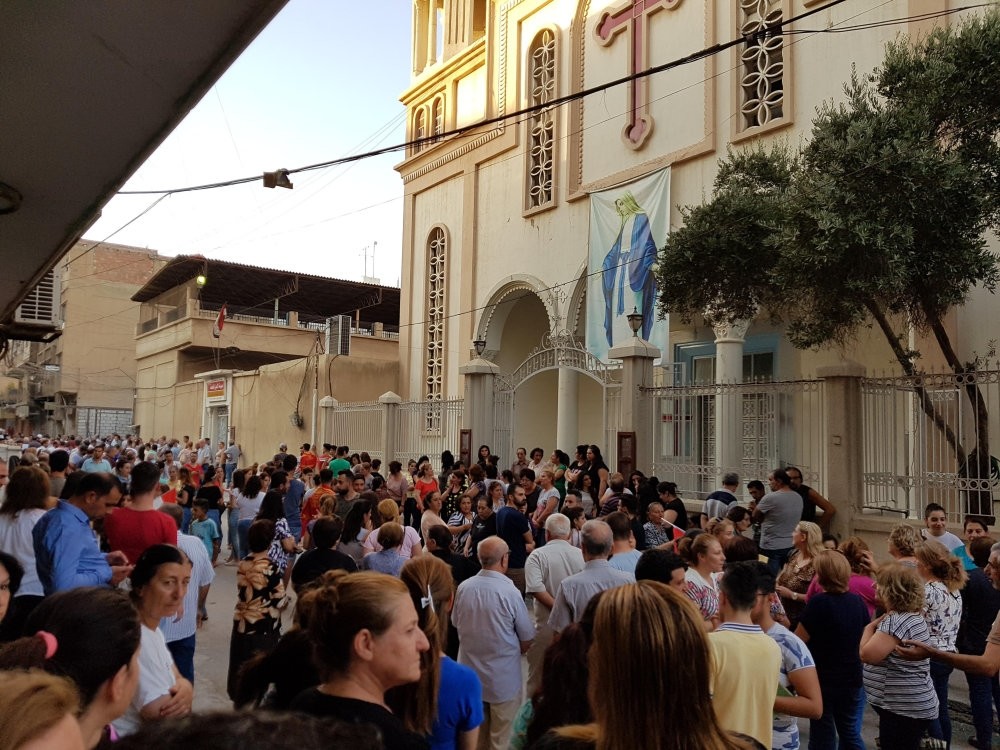 The suffering faced by locals in YPG-dominated areas in northern Syria seems endless, as the terrorist organization continues its atrocities, from forced recruitment to killing people

The PKK-affiliated People's Protection Units' (YPG) brutal policies towards locals in the areas that are under its domination continue as the terrorist organization kills a young man in northwestern Syria's Raqqa for refusing to join its ranks.

While the perpetrators fled the district, angered members of the Abu Hamis tribe raided and set the town's YPG headquarters on fire. The tribe also issued a 24-hour deadline for the YPG to leave the town.

The killing of the Syrian man was protested by local people in Raqqa Thursday. The crowd said that they are sick of the pressures and death threats from the terrorist organization.

The YPG has forced young people from areas under its control to join their forces within the so-called "compulsory conscription in the duty of a self-defense law" since 2017.

According to this practice, young people between the ages of 18 to 30 are forcefully recruited for nine months, with the possibility of extension if necessary. Those who refuse to join the YPG "face serious repercussions" including imprisonment.

Locals, however, have voiced their extreme discomfort over the practice. In November 2018, tribes and locals from northern Syria's Manbij organized a protest against the terrorist organization for its forced recruitment.

Foreign Minister Mevlüt Çavşoğlu stressed yesterday that various groups in Syria are all tired of YPG oppression as the terrorist group continues to disrupt stability in the region.

Speaking in a televised interview on the A Haber news channel, Çavuşoğlu said: "Assyrians, Christian minorities are all tired of the YPG. In Sinjar, Yazidis are saying that first Daesh and now the YPG. This terror group has been oppressing everyone."

Pointing out that the 30,000 Syrian Kurds in Turkey would like to return to Syria, Çavuşoğlu underlined that the YPG is not allowing their return.

Since its establishment, the YPG has been known to kidnap children and forced them to take up arms to fight in the name of the organization - a practice considered a war crime under international law.

In 2018, a U.N. annual report on children in armed conflict found 224 cases of child recruitment by the YPG between January and December 2017, a fivefold increase compared to the previous years.

Despite having signed a pledge of commitment with an international organization in June 2014 to demobilize all fighters younger than 18, YPG recruited and trained children as young as 12 in 2016.

The YPG, which has also been substantially supported by the U.S., gained control of vast swathes of Syrian territory under the cover of fighting Daesh. Turkey has long been warning the U.S. that a terrorist organization cannot be eliminated by using another one.

Ankara has stressed that by supporting and arming the YPG to eradicate Daesh, the problem of terrorism has not been rooted out, but a grave security problem for the whole region has been created.

The YPG's atrocities in the areas it controls have been repeatedly reported in various documents. Last year, the U.N. Office for the Coordination of Humanitarian Affairs (OCHO) reported an increase in deliberate disruptions of education and health services in northern Syria's Raqqa and Hasakah provinces, which are under the control of the YPG.

In August, the YPG also shut down Assyrian schools in northeastern Syria for refusing to implement the curriculum forced on them by the terrorist group. Following the closures, the Assyrian Democratic Society (ADS) accused the YPG of "intimidating" the region's Assyrian community. Various Christian groups also condemned the closures.

Private Assyrian schools administered by the Syriac Orthodox Church have been operating in the region since the mid-1950s and uses a curriculum that specializes in the Assyrian language and religion, developed jointly with the Syrian Education Ministry. The YPG has used schools in areas under its control to indoctrinate students with its militarist, ethnocentric ideologies.

U.S. Special Representative for Syria to hold talks in Turkey

Following the U.S. decision to withdraw from Syria, Turkey has increased talks with the U.S. concerning establishing a safe zone that was previously proposed by Ankara.

Çavuşoğlu said that U.S. Special Representative for Syria Engagement James Jeffrey would arrive in Turkey on Thursday and hold meetings to discuss the proposed safe zone along Turkey's border in northern Syria.

To eliminate terror threats along its borders, Ankara has indicated that the safe zone needs to be free of YPG terrorists. High-level officials stress that other actors in Syria should coalesce around a plan for a safe zone that provides security and lets Syrians return to their homes, as the YPG threat would be eradicated.

In relation to talks over the safe zone plan, Çavuşoğlu said there is no agreed schedule for the proposed zone and discussions have been continuing. He added that any decision on the safe zone should be coordinated with Turkey.

Çavuşoğlu stressed that Turkey's security concerns need to be allayed with the proposed plan. He stressed that the YPG would cooperate with any actor for its own interests.

Referring to Ankara and Washington's

Manbij deal focusing on the withdrawal of YPG terrorists from the region, Çavuşoğlu said that if that deal were implemented properly in Manbij and east of the Euphrates, today there would be no need to discuss these issues. He underlined that the Manbij deal has been gaining some momentum as well.

As Turkey managed to establish security in the Euphrates Shield region with its cross border operation, Çavuşoğlu said that Turkey would be able to do the same in the planned safe zone.

U.N. envoy to Syria expected to visit Turkey next week

Touching on the efforts for a political solution in Syria, Çavuşoğlu said that the Astana guarantors are continuing efforts to establish a constitutional committee, but a few issues remain to complete the process.

Çavuşoğlu stressed that Turkey, Russia and Iran have been discussing forming the committee. He noted that on the civil society list a few names must be changed, signaling that completing the process with the U.N. is imminent. He added that the newly appointed U.N. envoy to Syria, Norwegian diplomat Geir Pedersen, will visit Turkey next week and this issue will be discussed during the meetings.