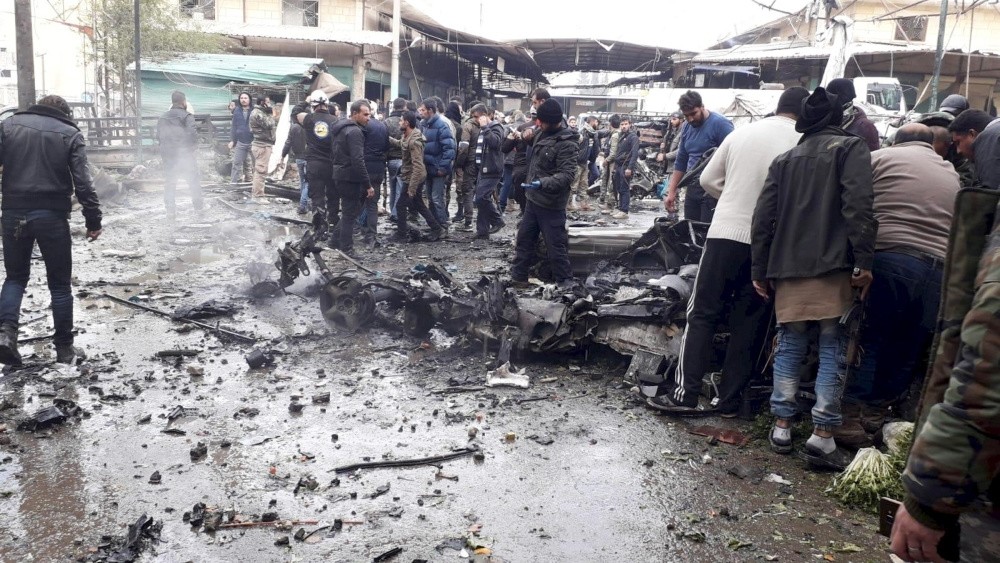 The recent escalation of bombings targeting Turkish-backed forces in northwestern Syria's Afrin province ahead of the likely establishment of a safe zone along the Syrian-Turkey border to provide border security from the terrorist threats have cast suspicion on the involvement of PKK-affiliated People's Protection Units (YPG) in the attacks.

"The perpetrator of the Afrin attacks was most probably the YPG, as verified by our local sources as well. Their main agenda was to sabotage the first anniversary of Operation Olive Branch, marking the liberation of the city from the YPG," Cemil Doğaç İpek, an academic and coordinator at the Syrian Turkmens Assembly, told Daily Sabah.

He highlighted that the terrorist group had already signaled such attacks in their statement issued at the time of withdrawing from Afrin by saying that they will engage in guerrilla warfare in the upcoming period.

On Jan. 20, the Afrin city center was targeted by two bombs, killing 10 people, including Turkey-backed Free Syrian Army (FSA) members, and injuring another 18, one year after the city was introduced to peace and stability by Turkey's Operation Olive Branch. The city was also rocked by a second bomb on Wednesday, marking the second terrorist attack in the city in just one week. None of the entities, however, claimed responsibility for the attacks in Afrin. Numerous pundits pointed out that these attacks were certainly carried out to send the message that Ankara has failed to establish stability in the territories under its control and to undermine the international community's trust in Turkey.

Some claim that Afrin, where 200,000 Syrian refugees returned and enjoyed reconstructed facilities in the city, has suddenly became "unstable" after terrorist attacks ahead of the likely establishment of the safe zone along Turkey's border, which is expected to be under the charge of Ankara. The timing of the increase in attacks in Turkish-controlled Syrian cities is drawing attention to the YPG as the possible responsible party since the group's autonomy dreams will be dashed when the U.S. and Turkey establish a 32-kilometer safe zone to be administrated by Ankara.

Underlining that order has been restored in the Turkish-held areas in Syria, İpek stressed that the terrorist groups are trying to spread the perception that the FSA and Turkish forces cannot establish security.

Turkey sees the YPG as an extension of the PKK, a group that has claimed the lives of more than 40,000 people in its 30-year terror campaign against Turkey. The power vacuum sparked by the Syrian civil war gave the YPG an opportunity to practically apply its form of governance and form communes dictated by its ideology. On July 19, 2012, the group began their efforts to gain autonomy by establishing a de facto autonomous region in Syria by connecting the northwestern Afrin canton to the Kobani and Jazeera cantons in the northeast.

Commenting on similar attempts to damage Turkey's credibility, Uluç Özülker, a retired ambassador and an academic, told Daily Sabah it should be noted the recent tension is a violation of the Sochi deal in Idlib as well, where Turkey and Russia set up a demilitarized zone in the last opposition enclave, warding off a regime offensive and a humanitarian disaster. Citing the claims of some media reports, Özülker underscored that after Turkey signaled its operation east of the Euphrates in December, the armed conflicts increased in Idlib, where Turkey plays a strong role, to diminish Ankara's influence.

Daesh attacks on U.S. soldiers aim at halting the withdrawal

Apart from the attacks suspected to have been the work of the YPG, there has also been an increase in Daesh terrorist attacks recently. In relation to the decision to pull its troops out, U.S. President Donald Trump previously said the only reason U.S. troops were in Syria was to defeat Daesh, and now that this mission has been accomplished, there is no reason for them to stay in the country. Therefore, when the "defeated" Daesh suddenly increased its attacks on U.S. forces, the bombings were met with suspicion. "Certain games are being played about the U.S. presence in Syria, especially after Washington showed its determined stance on its withdrawal from Syria. As soon as the White House announced its decision, a state of chaos was initiated," Özülker said.

On Jan. 16, two U.S. soldiers and two other Americans working for the coalition in Syria were killed in a suicide attack in Manbij, in the Aleppo province. Another 12 civilians were killed in that attack, which was claimed by Daesh. In less than a week, the Syrian Democratic Forces (SDF), mainly dominated by YPG forces, and a U.S. forces convoy became the targets of a suicide bombing, which was also claimed by Daesh, in the city of Shaddadi, killing five YPG terrorists and injuring at least two U.S. military personnel.

Stressing that these attacks on U.S. personnel are also a propaganda tool for the YPG, İpek noted that the terrorist organization may have leaked the information to Daesh, if it did not directly organize the attacks.

He elaborated that the recent attacks are different from former Daesh attacks given that it previously had abstained from directly targeting American soldiers, and Daesh's intelligence network has never been sufficient to obtain the information on the whereabouts and schedule of U.S. convoys.

It also would not come as a surprise if the YPG, which would benefit the most from the U.S. presence in the country, had a hand in the attacks to hinder the U.S. withdrawal, especially considering that the terrorist organization already threatened them that it "may be forced to free Daesh fighters in their prisons" if Washington halts its support. The repercussions of these attacks on the Trump administration's Syria policy has yet to be seen. However, on Thursday, a defense official confirmed that the U.S. is sending additional troops to Syria to help the provide protection to other American forces and their equipment as they withdraw.

Following the attacks, the SDF issued a statement saying that "the intensifying terrorist attacks" and "moving sleeper cells to strike" will not dissuade the organization from completing the mission.

Commenting on the U.S. media coverage of the attacks, Özülker highlighted that some media reports are depicting the situation in Syria as if Daesh has not been defeated yet - instead making the terrorist group appear strong enough to damage the U.S. military.

Indeed, the attacks are already resonating in Western media, which portrays the U.S. withdrawal as a massive mistake. The Guardian, for instance, wrote, "The attack ... emphasized the vulnerability of American troops since the U.S. president declared he was withdrawing 2,000 soldiers from northern Syria on the grounds that [Daesh] has been defeated."