Safe zone must be for Syrians, not protection for YPG terrorists 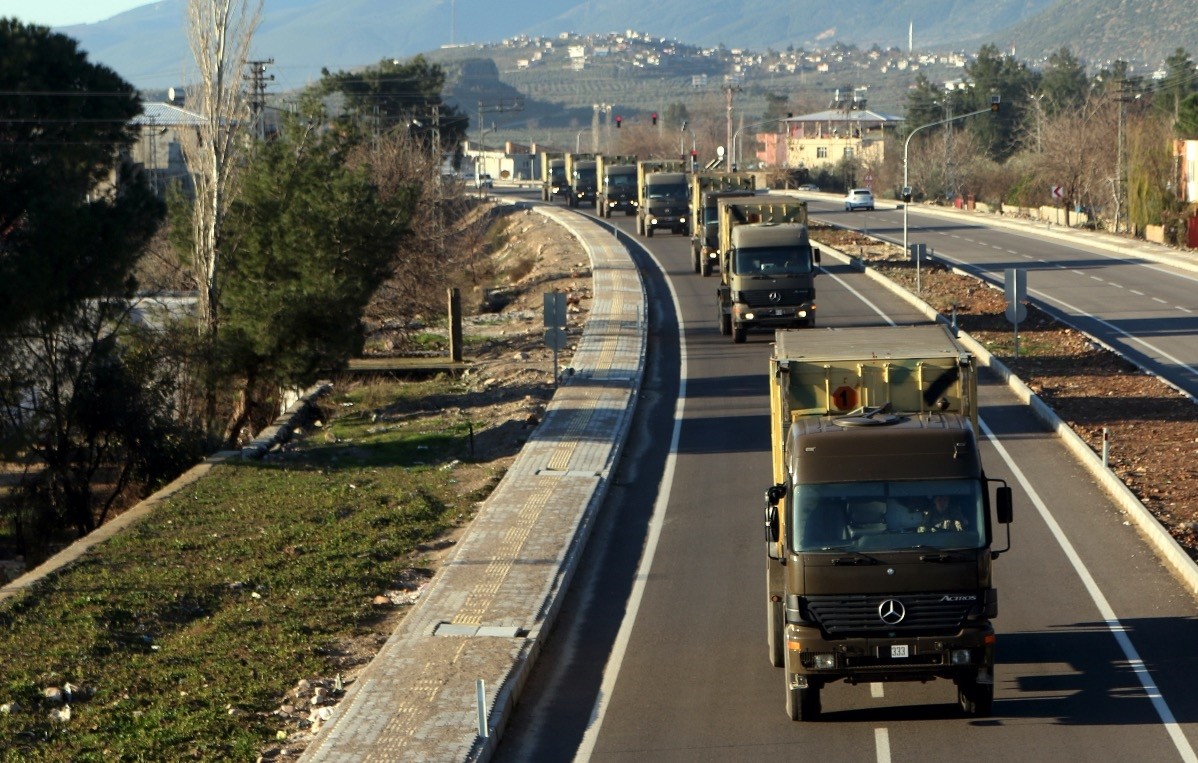 A Turkish military convoy en route to southeastern Gaziantep province on the Syrian border, as part of the deployment preparations for a cross-border operation against the YPG in Syria, Jan. 21, 2019.
by Özgenur Sevinç Feb 18, 2019 12:02 am

Any moves that would lead to protection for YPG terrorists under the guise of a safe zone plan will not be accepted, Ankara says, further underlining that the proposed zone must be under Turkey's control

High-level U.S. officials have been signaling in recent remarks that the U.S. will seek the involvement of European countries in the process of forming a safe zone along Turkey's Syrian borders; yet Ankara has clearly stressed that a zone free from the PKK-linked People's Protection Units (YPG) should be set up under its control in order to establish security in a region grappling with instability. Since the presence of the YPG just on the other side of the border is a direct threat to Turkey, officials in Ankara have been stressing that a safe zone should be under the control of Turkey, which is the main party concerned in the issue.

Defense Minister Hulusi Akar said Sunday at the Munich Security Summit that "Turkey respects the territorial integrity and political unity of Syria during the fight against terrorism," adding that Turkey's priority in northern Syria is to ensure the security of the border and get rid of terrorists, be they YPG or Daesh. Following the U.S. decision to withdraw, many questions regarding the future of the region hang in the air. In relation to the period ahead after the withdrawal, U.S. Vice President Mike Pence told journalists on the sidelines of the Munich Security Conference on Saturday that "We are asking other nations to join us and provide the resources and the support and the personnel necessary to secure the area and prevent [Daesh] or any other extremist organization from rising up and retaking their territory."

U.S. and Turkish officials have been discussing the details of the safe zone. Ankara has firmly stated that the YPG, which the U.S. used as a partner in the fight against Daesh, is a terrorist group and it cannot continue its presence along Turkish borders. Therefore, forming the safe zone may allay the security concerns of Ankara. Turkish officials have also been stressing that a safe zone should not be a plan to protect YPG terrorists.

Ömer Özkızılcık, an expert on Syria said that "the U.S. will withdraw from Syria; this is for sure. However, there is no set plan for how to conduct the process. The U.S. institutions have been in search of a road map."

The idea of establishing a safe zone along Turkey's Syria borders is not a new one; President Recep Tayyip Erdoğan suggested it years ago with an aim of preventing the national security threats posed by the YPG. As President Donald Trump's decision to withdraw 2,000 troops from Syria prompted other actors on the ground to ponder their next steps, establishing a safe zone is now back on the agenda.

"A 440-kilometers long (273-mile) safe zone in the east of Euphrates should be cleared of YPG terrorists and should be patrolled by Turkish forces," Akar said on Saturday highlighting Turkey's expectations.

Furthermore, U.S. Sen. Lindsey Graham said on Friday at the Munich Security Conference that Trump would ask European countries to send troops to establish a safe zone in Syria.

"I'm hoping that President Trump will be coming to some of you and asking for your help and you'll say 'yes' and in return, the capability we have that's unique to the U.S. will still be in the fight in Syria," Graham said. He pointed out that Joseph Dunford, the chairman of the Joint Chiefs of Staff, would discuss the issue with his counterparts.

Touching on Graham's remarks, Özkızılcık underlined that "no European country would be willing to send troops to northern Syria, a highly unstable region, while there is also the issue of security stemming from Daesh."

Stating that Turkey only postponed the operation to Syria after the U.S. decision to withdraw, Özkızılcık said that Ankara would unilaterally opt for launching an operation if its security needs are not met.

Turkey has long been stressing that it will not shy away from ensuring its security against threats and launch an operation to eradicate the YPG along its borders. Ankara has been calling on its allies to avoid ignoring Turkey's security concerns and increase cooperation instead of siding with terrorist groups.

Graham said the YPG for Turkey is "an offshoot of the PKK," and that Turkey "will not withstand the YPG on their border."

"We owe it to Turkey, an ally, to fix this problem. We owe it to the SDF [Syrian Democratic Forces] not to leave and let another war come that could destroy them. Who will help us in the future if we do that? So we need a safe zone to deal with that problem," he added, clearly saying that the U.S. will continue to protect the terrorist group.

Graham also underscored that the troops in the safe zone also need to watch for the re-emergence of Daesh. "If we don't watch, Iran will be the biggest winner of the West withdrawing from Syria," he said.

Commenting on the developments in Syria, Oytun Orhan, an expert on Syria said that "Ankara and Washington are on the same page in establishing a safe zone; yet what they understand from the safe zone might be different. The safe zone is a red line for Turkey to clear the YPG from its borders."

"However, the U.S. might be aiming to set up a zone to drive a wedge between Turkey and the YPG, which would prevent any operation from Turkey against the terrorist group," Orhan underlined and added that to achieve it the U.S. would ask international actors to contribute.

Agreeing with Orhan, Ali Çınar, the president of the U.S.-based Turkish Heritage Organization said that "The U.S. understands the safe zone as protecting YPG-PKK, however Turkey will not accept this format. Turkey was very clear from the beginning. Turkey has two clear objectives: Clearing the terrorist elements from the border and having refugees go back to Syria safely."

Referring to Graham's remarks, Orhan stressed that "if the U.S. insists on an international coalition to control the region in an attempt to secure YPG terrorists, Turkey would not wait and launch an operation against YPG terrorists."

Despite different perspectives on some issues in Syria, Ankara and Washington appear to be open to a dialogue to resolve them. Touching on the ongoing talks, Çınar said that "A solution in Syria without Turkey is impossible. U.S. and Turkish officials are continuing to have meetings on this issue. Erdoğan and Trump have spoken three times since last month."

"It seems like Turkish Defence Minister Akar will be in Washington next week. Having an open dialogue is very important in order to solve the issues," he added.

On Feb. 16 Trump tweeted that "the U.S. is asking Britain, France, Germany and other European allies to take back over 800 ISIS fighters that we captured in Syria and put them on trial. The caliphate is ready to fall. The alternative is not a good one in that we will be forced to release them."

Orhan also pointed out that by using such a tone, Trump might be trying to get European countries more involved in Syria during the withdrawal process.