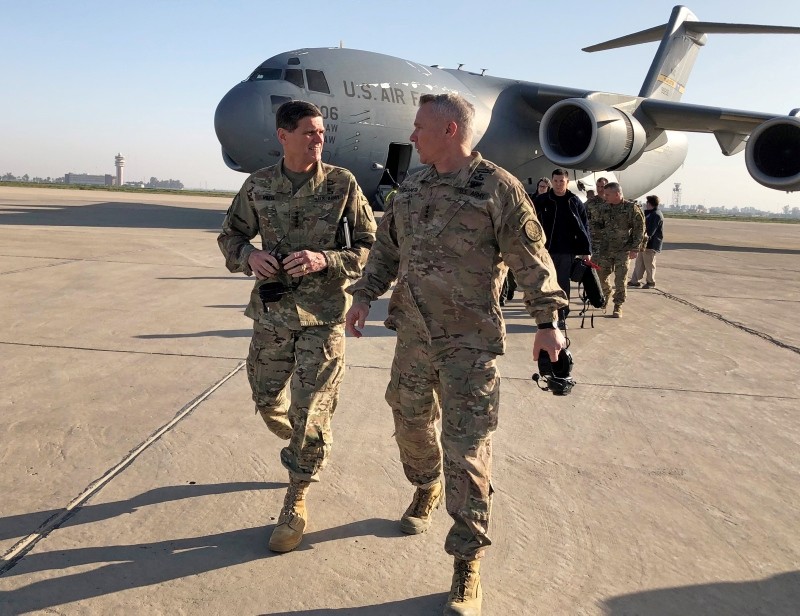 The U.S. Army general, along with other senior U.S. generals, met with several prominent figures of the SDF, which is predominantly led by the PKK's Syrian offshoot People's Protection Units (YPG) terrorists, at an airbase in northeast Syria and held a press conference with a small group of reporters.

In the meeting, Ferhad Abdi Şahin, codenamed "Mazlum Kobani," who is the commander-in-chief of the U.S.-backed SDF, called for about 1,000 to 1,500 international forces to remain in Syria to help fight Daesh terrorist group and expressed hope that the United States, in particular, would halt plans for a total pullout. His plea comes at a time when Ankara has been signaling a cross-border operation in northern Syria to eradicate the presence of the PKK's branches on its southern border.

Şahin, who is also a senior figure in the People's Protection Units (YPG), has been in the red category of the Turkish Interior Ministry's wanted list, which is divided into five color-coded categories, with red as the most wanted, followed by blue, green, orange and grey. He is known to be close to jailed PKK leader Abdullah Öcalan and was sent to Syria after a civil war broke out in that country.

"We would like to have air cover, air support and a force on the ground to coordinate with us," Şahin said, listing the SDF's requests from the U.S.

He reportedly said there were discussions about perhaps French and British troops supporting the SDF in Syria, but he stressed he also wanted at least "a partial group of American forces," who now number more than 2,000 in Syria, to stay as well.

U.S. Army General Votel, however, said he was still carrying out President Donald Trump's December order for a complete U.S. withdrawal, signaling that American troops staying in the country is not on the table.

"We certainly understand what they would like us to do, but of course that's not the path we're on at this particular point," Votel told reporters.

Asked about any discussions on a continuing U.S. presence in Syria, Votel said: "So the discussion really isn't about U.S. forces staying here. We've looked at potentially what coalition (forces) might be able to do here."

In December, U.S. President Donald Trump announced that the U.S. would withdraw its troops from Syria, saying that Daesh is defeated. Trump's abrupt decision, nevertheless, has raised a range of criticism suggesting that Daesh continues to be a threat, and it is a betrayal for their ally on the ground, the YPG.

Yet Votel has also been recommending continued support to the SDF as long as it keeps up pressure on Daesh militants.

But Army Lieutenant General Paul LaCamera, who is the commander of the U.S.-led coalition battling Daesh in Iraq and Syria, cautioned on Sunday that the United States would be legally unable to support the SDF if they partnered with Assad or Assad's Russian backers.

The close U.S. partnership with the SDF/YPG since the Barack Obama administration has been always a sticking point in Washington-Ankara relations. Turkey sees the YPG as an extension of the PKK, which has claimed the lives of more than 40,000 people in its 30-year terror campaign against Turkey. The U.S., however, while listing the PKK as a terrorist group, opted to continue its steadfast military support for the terrorist organization under the pretext of fighting Daesh, despite Ankara's warnings that the terrorist groups cannot continue its presence along Turkish borders.